Siah Armajani Courtesy of the Metropolitan Museum of Art

The Iranian-American artist Siah Armajani is best known for large-scale public works such as a Minneapolis bridge and the torch sculpture for the 1996 Atlanta Olympics. In New York, he co-designed Battery Park City’s waterfront plaza (1989) and created the 65 ft tall sculpture Lighthouse and Bridge on Staten Island (1996) at the St. George’s Ferry Terminal, which was quietly removed last year.

The Met Breuer gives an indoor look at Armajani’s six-decade career in Follow This Line, his first major US retrospective, previously at the Walker Art Center in Minneapolis. Around 100 works, linked by themes such as exile and how language can transform people, range from mixed-media pieces with delicate script made in the 1950s in his native Tehran, to architectural models for public works, to a large public “reading room”, to sculptures.

In Brooklyn Bridge Park, the Public Art Fund has concurrently restaged one of Armajani’s most influential public works, which has not been recreated since it was presented in 1970 at the Walker: Bridge Over Tree, a covered bridge to nowhere steeply traversing one small pine tree. At The Armory Show’s Platform section, the London and Hong Kong gallery Rossi & Rossi is presenting Armajani’s recent series, Seven Rooms of Hospitality (2016-17), which references the migrant crisis through 3D-printed replicas of spaces, such as a detention centre. One of these spaces, Room for Migrant Worker, has been realised as a large-scale sculpture, presented alongside the smaller works. Visitors who have seen The Met Breuer show might note that the new series uses Armajani’s frequent pairing of architectural references: vernacular American and Soviet Constructivist. Asked about similarities between them, Armajani says: “This is a very long answer and could be a dissertation in itself!” We also spoke with the artist about his move to the US, magic spells, eavesdropping and the inspiration for Bridge Over Tree. 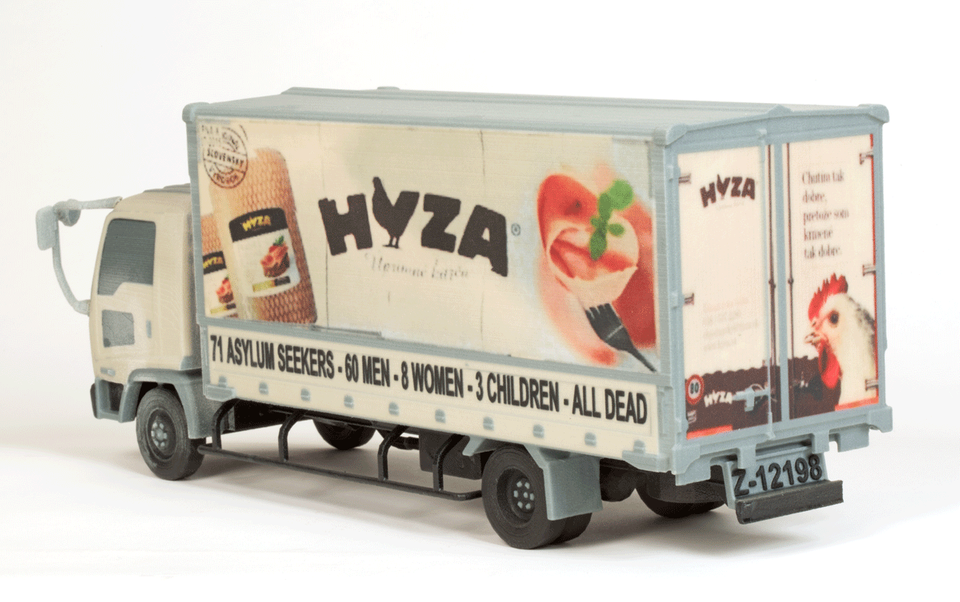 Siah Armajani's Room for Asylum Seeker (20-17) from his series Seven Rooms of Hospitality (2016-17). Rossi & Rossi is showing works from the series at The Armory Show Courtesy of Rossi & Rossi

The Art Newspaper: How old were you when you left Iran?

Siah Armajani: Twenty-two; I went to the University of Tehran to study philosophy, but at the end of my sophomore year I left for America. I was in danger of being arrested because of my political activity against the shah. My father understood that and was able to get me out of Iran.

What most struck you about the US when you came to Minnesota?

I noticed a difference, quite a bit—exchanging with people… And an important freedom. This was in the 60s: society was very open towards a culture revolution in America. So, it was refreshing and exciting. Of course, I knew about [American] literature, because my teachers referred to writers such as Walt Whitman and Emerson, who had translated poetry from the Persian poets such as Hafiz from German [translations]. So that was a wonderful, familiar experience.

Clare Davies, who organised the Met Breuer show, spoke about your use of language and said you had procured some magic spells from a scribe in Tehran by telling him a made-up story.

The main post office was in the centre of the city, and when you passed by it, the scribe was sitting on the steps [with] a few other people standing around and talking to this scribe—probably because they could not write or read. [If you had] something to tell your mother or father or cousin, you could tell him, in a very intimate, secure way, and he would write it. I would always walk that way and sometimes sit on the step next to the scribes and [listen]. Most of it was people telling their parents about their future bride, or they wanted to write prayers for their parents and would ask the scribe to find the appropriate prayer. All kinds of personal expressions were exchanged.

What about the spell you procured for your mother?

I made up this story to get a prayer to have my mother be safe from evil, and also so that my father would not marry another woman. It was just a made-up story. And he would write this prayer and draw the pictures and would ask me to engrave this drawing on a piece of metal, and put it in a fire and recite verses from the Koran—and then maybe the problems would disappear.

You wrote a lot of things on the works you made in Tehran in the 50s. How did you use language?

Language, especially poetry, is very important in daily life, because poetry gives you open-ended possibility. So language becomes abstract. And it’s also the possibility to feel the many obligations that you have. So, [even if] you do not want to go [somewhere] or you cannot go, you keep saying yes, yes, yes—which means no—because it is impolite to say no. (Of course, this is 60 to 70 years ago: today Iran has completely changed, not only politically… but what I’m telling you is my memory of childhood.) With Bridge Over Tree, can you tell me how you see the site? Because it has the Brooklyn Bridge and the Manhattan Bridge on either side, it seems like a perfect place. Does that change how you experience it?

There was a lonely evergreen tree in the landscape and I fantasised to walk from one side, go above the tree and land on the other side: to make peace… So I built that bridge in 1970 in Minneapolis. That piece always evoked excitement, smiles, happiness, so when they asked me to redo that, I said I’d like to do it at [the] Brooklyn Bridge, because it contrasts so much with that bridge.

Nicholas Baume, the director and chief curator of Public Art Fund, mentioned there are more large-scale pieces today than there were in 1970. Do you see Bridge Over Tree differently now?

It was a poetic documentation about Heidegger’s notion of “location” and “neighbourhood”. I do not see the work differently years later, except the new context, the new location close to the Brooklyn Bridge.

How has your work shifted, and what are you working on now?

I’m working on a series titled, Seven Rooms of Hospitality. These seven rooms depict aspects of migration and immigration. My work [in] the 50s was painting—and “private”. Since the 60s, it became “public”.

• Siah Armajani: Follow This Line, The Met Breuer, until 2 June