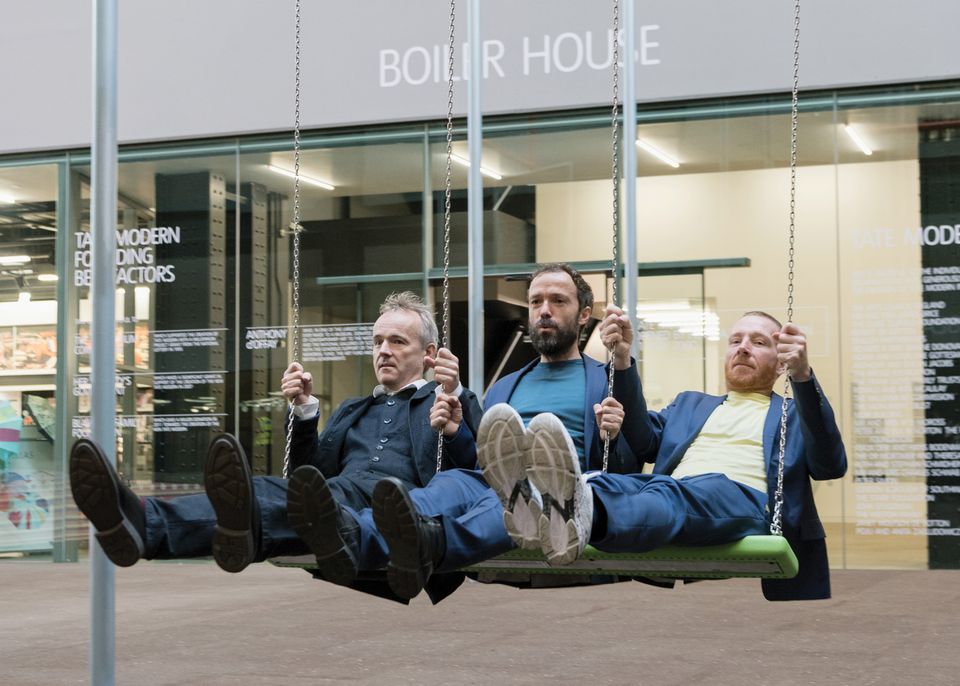 Superflex first made a splash in the UK with Flooded McDonald’s. The film, screened at the South London Gallery in 2009, showed a slowly rising tide engulf a replica of a McDonald’s restaurant, with floating French fries and short-circuiting electric menus. Described by one reviewer at the time as a “chilling comment on our times”, the film is emblematic of the Danish collective’s work: simple and sleek on the surface, but delve deeper and our most pressing issues are being tackled.

The collective, which comprises Bjørnstjerne Christiansen, Jakob Fenger and Rasmus Nielsen, is back in the UK capital this week with its biggest work to date, the Hyundai Commission for Tate Modern’s Turbine Hall. One Two Three Swing! is made up of three sections: “apathy”, “production” and “movement”.

For “apathy”, a giant swinging pendulum hangs above the Turbine Hall’s west entrance ramp, which is covered with a giant carpet that mimics the colour scheme used for British currency. “Movement” consists of three-person swings connected by a line of orange-coloured beams that snake around the space before reappearing outside—it is the first time a Turbine Hall commission has gone beyond the museum’s walls. Meanwhile, “production” is where all the swings have been constructed and where more will be made during the exhibition. The work will also extend further afield, with swings installed in locations throughout London. 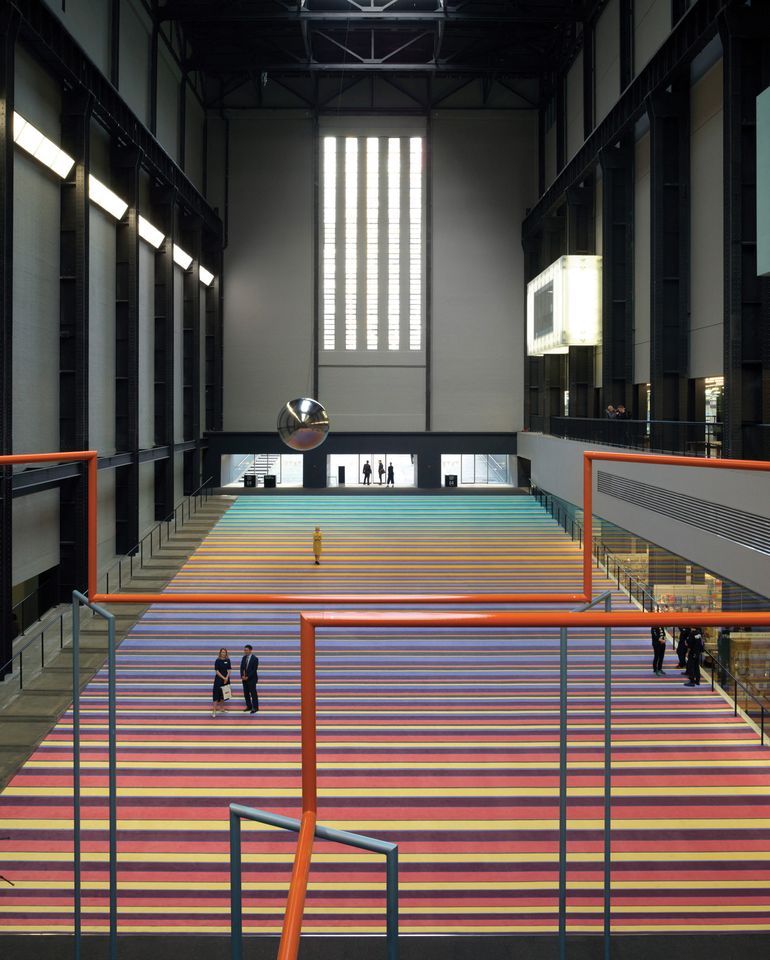 The Art Newspaper: What were your first thoughts when you got the Turbine Hall commission?

Bjørnstjerne Christiansen: We thought, “Wow, this is going to be quite a challenge.” It’s the most interesting challenge for the Superflex practice, where you have the chance of dealing with a really interesting public space. We immediately started looking at the space, and at what people have done there before. The most important thing we discovered was that the Turbine Hall is designated as a street. So, it means it is literally part of urban space and not a confined room or institutional space. It informed our thinking early on.

Where did the initial idea of One Two Three Swing! come from?

There is quite an extensive study process—in this case, engaging with the history of the Turbine Hall and the people who work there. It also became interesting to think about what kind of space it was before. The Turbine Hall used to be an engine that produced energy that was then distributed to the City of London [and parts of Southwark]. And these are topics that we have worked with for a long time: production, distribution and energy. It was a natural starting point to ask, “What is this machine?” and “Is it possible to restart this machine?” You have three million to six million people visiting the Turbine Hall each year. So, what is interesting and important to discuss today? One Two Three Swing! really looks at collective energy. It is the opposite of the focus on individualism and the selfie culture. The work is about how together we can set things in motion and generate energy, linking back to what the Turbine Hall used to do.

What are the three sections of the installation—apathy, production, movement—about?

We’re looking at the current state of mind, globally. You can think about climate change. We’ve had big financial crises. And at the same time as we all feel extremely connected, we are maybe even more isolated because we don’t understand all of this information that comes in.

So, the apathy section is a moment for contemplation, for thinking, for processing what is going on. Then the next step is movement. And movement, in our understanding, really depends on what happens when you start collaborating with others. What happens when you are two or three people and set things into motion? Production is an important part and a starting point. I know I started talking about apathy but the actual start is at the other end. Although you don’t have to read it literally.

I think it’s important to understand that our way of trying to deal with the Turbine Hall—and the institution itself—is really to move through the walls and integrate the space with the urban landscape. We can have an ambition to set it into motion, but really it will depend on how people then take it on, how people continue this line.

How will the swings reappear elsewhere in London?

The orange line [of swings] will emerge from the ground. We are looking for a tool, a way of actively connecting people around the world. We believe that you need to see, you need to experience, you need to encounter other ways of living and other ways of thinking to develop as an individual. The work will evolve during the exhibition period and then be implemented in other sites around the world. The Turbine Hall is just the beginning of the process.

This idea of collective energy must be very close to how you work as an artist collective?

There was a difference between being an individual artist compared with three individual artists at the beginning. We created Superflex in 1993, when we were still students at the art academy. Working as a three means we are challenged at the very early stage of our concept development. I may have an idea and the two other guys challenge it. We may end up with my idea, but I don’t have ownership any more. It is shared through the process of development.

We do not want to have a gigantic studio with a lot of people who work just for us. We work in a more, let’s say, spider-web organisation, where we have a lot of people we have worked with for many years who are specialists in their field. They continue developing their own knowledge through other projects. So, all of the knowledge they accumulate is also our knowledge, and vice versa. That, for us, is the most dynamic organisational model.