From concert designer to sell-out artist, we talk to Mike Winkelmann about making millions and selling with Christie's 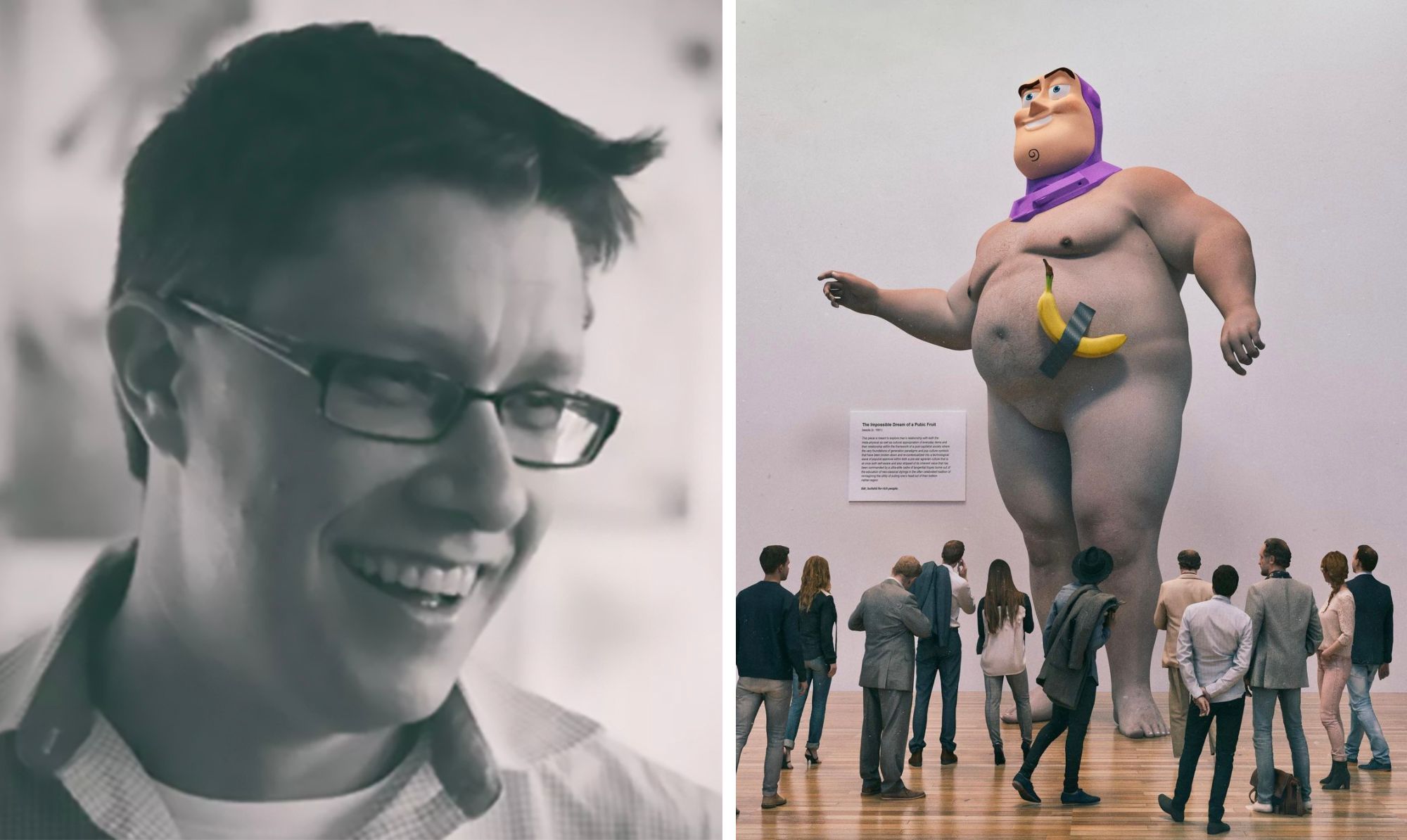 Less than six months ago, Beeple, whose real name is Mike Winkelmann, was unknown to the art world.

But then, something unprecedented happened. Christie’s announced it was selling a digital work by Winkelmann, and in doing so would become the first major auction house to offer a standalone NFT work of art. Within the first hour of the work going live on 25 February, bids had rocketed from $100 to $1m, thrusting Winkelmann into the upper echelons (price-wise at least) of the art market. At the time of writing, 125 bidders had racked up $3.5m with seven days still to go.

“The past couple of months have been very, very crazy,” Winkelmann says from his South Carolina home over Zoom, a 65-inch flatscreen television tuned in to CNN, but muted, behind him. Wearing a zipped up navy cardigan, rectangular glasses and slicked down hair, 39-year-old Winkelmann looks more Mister Rogers than multi-million-dollar artist, but his nerdy attire is countered by bursts of raucous laughter and plenty of expletives.

“It’s been such a crazy trip to have this whole new world of NFTs open up that I never even thought was possible. And now it’s like, ‘oh, wow, okay, I could sell my work like this’.”

Outside of the art world, Winkelmann, who named himself Beeple after a 1980s furry toy, already has a huge following—1.8 million of them on Instagram alone. Before the pandemic hit, he made a career as a graphic designer and animator, creating concert visuals for performing artists such as Ariana Grande, Justin Bieber, Childish Gambino and Nicki Minaj. When Shakira walked through a wall of fire at the Super Bowl, that was Winkelmann’s work. Other clients have included Elon Musk’s SpaceX and Apple.

Winkelmann’s first big success at auction came in December when he “dropped” 21 pieces on Nifty Gateway. (For the uninitiated, NFTs are usually released in time-limited “drops”, much like skate brands sell hoodies or trainers.) Over one weekend the sale netted $3.5m, plus $500,000 on the secondary market. According to Esquire magazine, a mystery buyer known only as MetaKovan, thought to be based in Singapore, scooped 20 of the 21 works.

From the comfort of his brother’s backyard, Winkelmann spent the sale Tweeting and responding to DMs from would-be buyers including Sean Lennon, the son of musician John Lennon. “Yeah, we’re best friends now. You can put that in the article,” Winkelmann smiles.

It is a remarkable rise, given that Winkelmann’s first foray into NFTs only came last October. He says: “People kept hitting me up, saying, ‘Oh, you should check out this NFT thing.’ And so finally, when I looked at it, in about mid-October, I was like, ‘What the hell, this is just crazy.’ From there, I just went apeshit trying to understand everything. I talked to collectors, I talked to the CEOs of these platforms, I talked to artists in the space—anybody that could help me wrap my head around what was going on.”

The pandemic has brought much of the doggedly analogue art world kicking and screaming into the 21st century, and NFTs are benefitting from that seismic shift. “Covid is a definitely a big piece of this frenzy, people are sitting at their computers all day—they’re locked inside and have fewer options. If there was no Covid-19, I honestly don’t think the space would have accelerated this fast,” Winkelmann says.

For many artists struggling to make a living without physical shows, the NFT space offers a tangible income. Smart contracts automatically provide artists with a cut, usually around 10%, of all future sales—in the US, artists currently do not benefit from resale rights as they do in Europe. As Winkelmann says: “A bunch of people like me have seen their work go completely. I’ve gone from doing big shows, with Justin Bieber filling 70,000 people in a stadium, to nothing for the second year running. So NFTs have been a godsend for us in terms of being able to make money again.”

One of the most potentially disruptive aspects of the NFT market is that artists do not need the middlemen of galleries and auction houses to sell their works, though fees are payable to the websites that mint NFTs. Hierarchies are also emerging among NFT marketplaces. As Winkelmann points out: “Anybody can sell things on Rarible and OpenSea, you can just go on there and start creating accounts. But the thing with Nifty is, it’s a gatekeeper. They are only doing six or seven artists per week and the waiting list is long.”

So does an artist like Winkelmann need Christie’s validation or is the 250-year-old auction house just using NFTs for clickbait, as the British street artist Banksy’s publicist Jo Brooks suggested on the social media app Clubhouse a few weeks ago?

“I would say, yes, I do I need the validation to an extent,” Winkelmann says. “I don’t know very much about the traditional art world, but I find it fascinating the way it works. There’s a lot I didn’t know, but one of the most interesting things is that most of the time people are anonymous when they buy stuff. To me that is very weird, because I thought this whole thing was a bit of a dick measuring contest.”

He adds: “I’m excited to dive more into that world and maybe shake things up a tiny bit.”

The quality of art on offer has been a sticking point for many of the more traditional art world players, with some bemoaning most NFTs as “barely more compelling than empty space”, in the vein of Yves Klein’s void, but without the artistry.

Winkelmann’s drawings certainly set him apart—inspired by the British illustrator Tom Judd, he has been creating one sketch a day since 1 May 2007. The work being sold by Christie’s, Everydays: The First 5000 Days, is comprised of 5,000 of these images.

Part political cartoon, part homage to poplar culture, certain characters and figures crop up time and time again—Buzz Lightyear, Kim Jong Un and Donald Trump are among the most prevalent. In one loaded image wryly commenting on the absurdity of the art world, Buzz Lightyear appears with Maurizio Cattelan’s now ubiquitous banana taped to his belly.

“The rules for my Everydays are that they are something done start to finish that day, posted somewhere on the internet before midnight,” Winkelmann says. “In the beginning, they were much more abstract, more about colour and composition, repetition and stuff like that. Now they’re much more literal and a lot of the time they’re about current events. I recently did a picture about Daft Punk, because Daft Punk just broke up. So things like that are very timely.”

Many of those investing in NFTs made their millions from Bitcoin and Ethereum—and the art market is taking notice. After being quizzed on Clubhouse, Christie’s agreed to accept Ethereum for the Winkelmann sale, though premium must still be paid in dollars. Since then, the ever publicity-conscious Damien Hirst announced he would accept crypto for a new series of prints published by Heni.

It must surely only be a matter of time before others follow, particularly now luxury brands are eyeing up crypto after Musk’s electric car maker Tesla acquired $1.5bn of Bitcoin in January. Musk has made no secret of his NFT art collection, while his girlfriend Grimes sold around $6m-worth of digital works earlier this week. According to Nonfungible.com, which monitors the crypto collectable market, in July 2020, total NFT sales surpassed $100m. And they currently stand at almost $375m.

In terms of collectors, the Christie’s sale could provide some cross-pollination from the fine art world. According to one art advisor, even clients in their 60s and 70s are making enquiries about NFTs.

So, will Winkelmann be going back to creating concert visuals or is he now firmly ensconced in the art world? “I’m an art world son of a bitch!” he exclaims. “Beeple, that fucker is here to stay.”

• To find out more about NFT art listen to our podcast episode WTF are NFTS? Or watch our short explainer video on YouTube