A match made in heaven: Bill Viola to be shown alongside Michelangelo at the Royal Academy 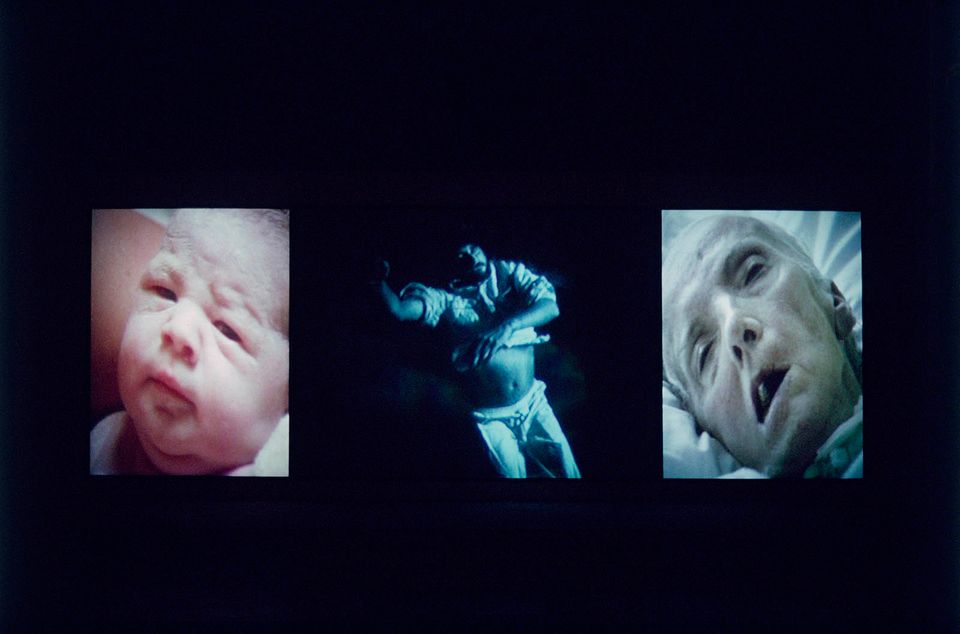 Bill Viola's Nantes Triptych (1992) includes images of a woman giving birth and the artist's mother on her deathbed. “It is the awareness of our own mortality that defines the nature of human beings,” Viola has said Courtesy Bill Viola Studio Photo: Kira Perov

The Royal Academy of Arts (RA) in London will turn over its galleries next year to the US artist and honorary academician Bill Viola for its first major video art exhibition. Twelve of Viola’s metaphysical moving image pieces will be paired with 15 similarly spiritual works by Michelangelo, including one of the museum’s central treasures, the Taddei Tondo, as well as a set of drawings on loan from the Royal Collection.

The idea for the exhibition Bill Viola/Michelangelo (26 January-31 March 2019) came from a visit the California-based artist made to the Print Room at Windsor Castle more than a decade ago. As well as sharing the Leonardo drawings the artist came specifically to see, Martin Clayton, the head of prints and drawings at the Royal Collection, said he was keen to show Viola the holdings of work by Michelangelo—especially his “presentation drawings”, created as gifts for friends and loved ones.

“Bill was immensely enthused by the Michelangelo drawings, which he had not before seen in any number—unlike the paintings and sculpture—and he instantly perceived the innate spirituality that informed them,” Clayton says. “We discussed the striking echoes between Michelangelo’s drawings and Viola’s own works—which were not conscious or deliberate on Bill’s part, but in a long tradition of art that attempts to render visible or perceptible the spiritual aspects of our existence.” The forthcoming show, the result of sporadic conversations over the years, draws on “the two artists’ abiding concerns with the body as a transient vessel for the immortal soul; with the moments of transition at birth and death, and of transcendence through ecstasy or abasement; and with the fragility of life, the presence of death in life, and our struggle to transcend the limits of the material world,” Clayton says. 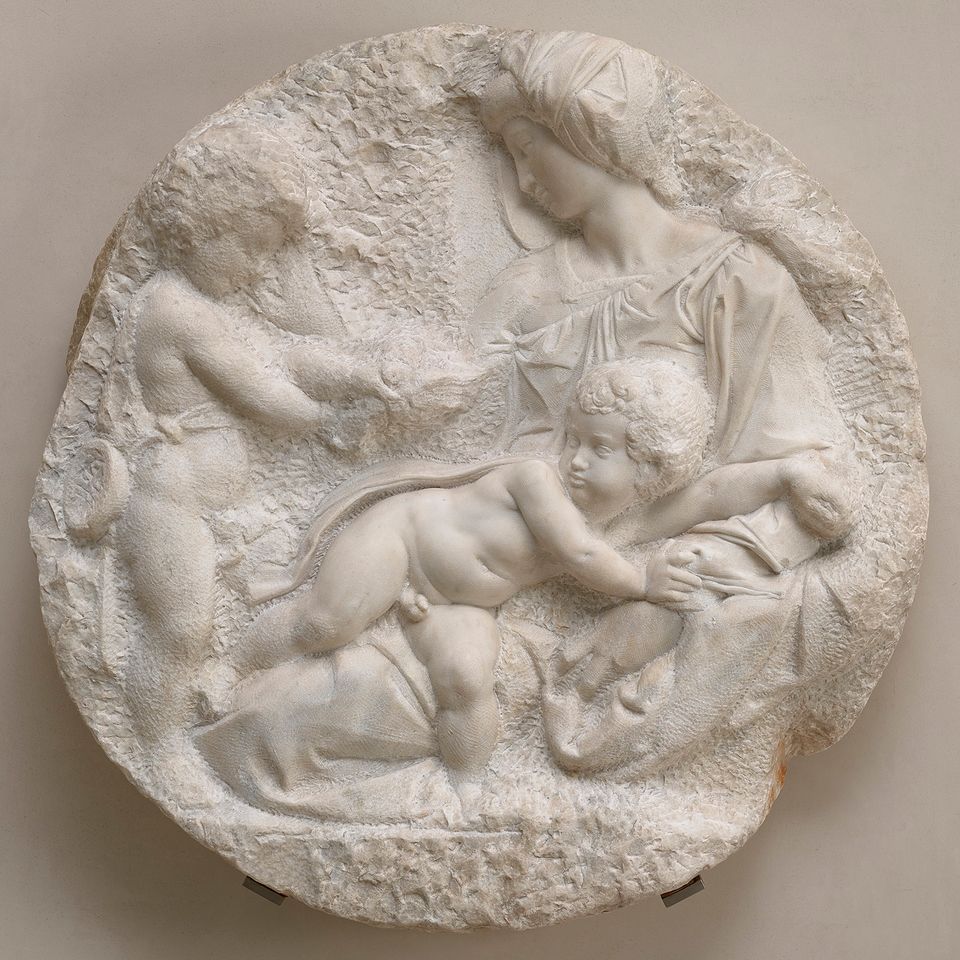 The comparisons are made clear in the striking pairing that opens and closes the show, which is organised to take visitors through a looping journey “of life, death and rebirth”, says the RA’s curator Andrea Tarsia. Viola’s The Messenger (1996), in which a man slowly floats and sinks in water in a cycle signifying life and death, will be shown on one end of the Royal Academy’s Central Hall, opposite the Taddei Tondo, an unfinished marble relief sculpture in which the Madonna holds the child Christ, who shies away in fear from a bird held in the hand the infant John the Baptist, a symbol of his future sacrifice. “These works that so eloquently consider mortality as a condition of life,” Tarsia says, “take you to core of the artists’ practice, in representing how they shape medium and subject matter to an expression of their enquiry, but also in the emotive charge with which they connect the viewer to it.” 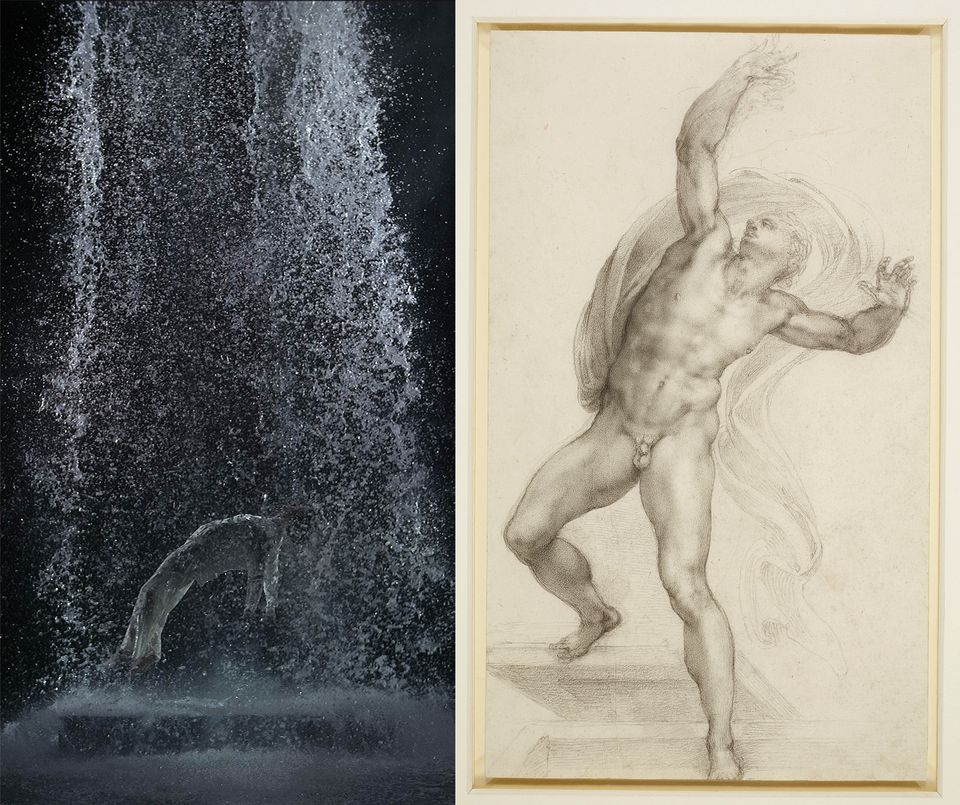 The bulk of the show will display intimate sketches by Michelangelo with Viola’s large-scale sometimes immersive videos, however, so the question of how to present such disparate media together. The plans was never to show them “in direct juxtaposition, because the scale, colour and sound of most of the video pieces would overwhelm any drawing”, Clayton says. Tarsia adds that “the relationships are set up differently in different galleries, but in the end we felt it important that the works weren’t presented separately, as though in parallel exhibitions, but that the dialogue the exhibition sets out to establish was reflected in the conversation between works.” This will be done through a layout of galleries and passageways “that will be in turns more open or more contained”, Tarsia says, which should create a new experience for visitors.