'A perfectly engineered catastrophe': artists speak out after Theresa May’s Brexit deal is crushed by parliament

Some, like Mark Wallinger, hold out vain hope for a second referendum, others, like Anish Kapoor, say we must come together to beat mounting xenophobia and intolerance 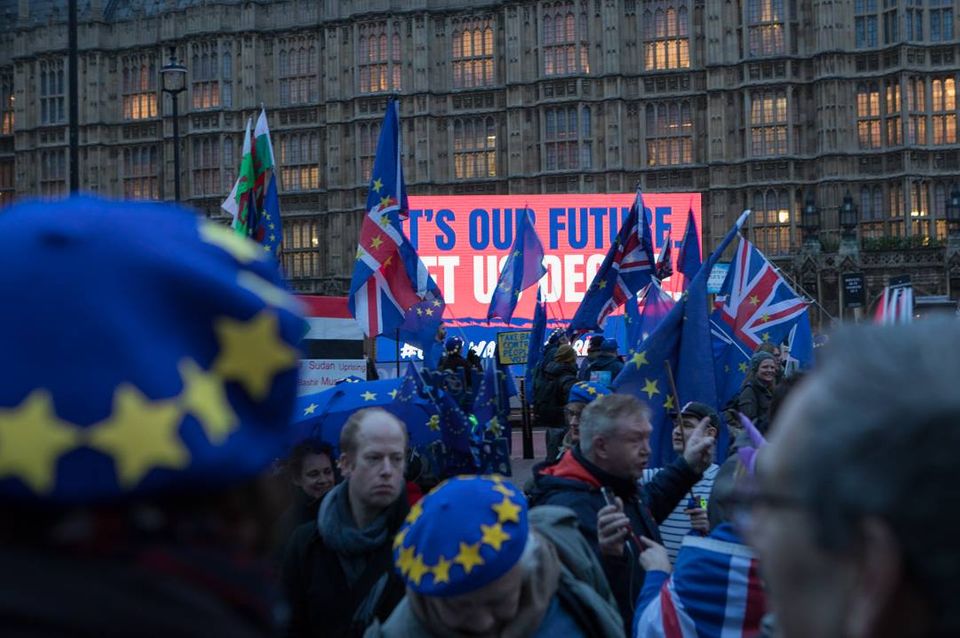 Protestors gathered both in support and against Brexit outside the House of Parliament in London last night (15 January) Photo: © www.david-owens.co.uk

Following the resounding rejection of the British Prime Minister Theresa May’s Brexit deal last night, and the vote of no confidence today (16 January), leading artists have expressed their anger and frustration over the political crisis.

Yesterday, the House of Commons, including one third of Tories, voted against May’s deal by 432 to 202, the largest ever defeat for a UK government. May, who is now facing calls to delay Brexit, has three days to deliver an alternative plan 72 days before the UK is due to leave the European Union.

The British sculptor Anish Kapoor, who was born in Mumbai, says Brexit is an attempt “to resurrect Britain’s colonial past”, and needs to be put to rest. “Brexit seems to have brought out the very worst in us—Britain is more intolerant, more xenophobic, more insular than I have known it to be since the 1970s,” he says.

If Brexit goes ahead, Kapoor believes we will spend the next decade in-fighting, deflecting from the very real and pressing issues of poverty and deprivation in the UK.

He says it it delusional to think that Brexit will give us sovereignty and, therefore, power. “Brexit is a further sign of our broken society. It is our duty as citizens to find ways to come together and overcome the deeply sad and disorienting effects of Brexit,” he says.

The Turner Prize-winning artist and “remainer” Mark Wallinger says he would like a second referendum, but points out that the negotiation process “has been entirely opaque–it was always going to be “the computer says ‘no’”.

He adds: “In retrospect, it was a perfectly engineered catastrophe! But, in fact, it’s more the idiotic consequences of the wish to cling to power, which is everything that’s wrong about the current state of the Tory party and our tribal politics.”

Great clarity in Jonathan Freedland's analysis in today's Guardian.co.uk : "So how did it come to this? What led May, parliament and the country to this moment? The answer you give will depend on how far back you want to go. (...) But Cameron also deserves blame for the manner of his departure. Had he delayed his resignation, he could have been around to frame what the referendum result meant. He could have said, for example, that Britons had voted to leave the EU but had not voted to leave either the single market or customs union, since neither were on the ballot paper. Britons clearly wanted out of the EU’s political institutions, he might have said, but they had not rejected membership of the common market. And so he could have advanced a Norway-style Brexit, one that would have minimised the harm. Instead he fled the scene of his own crime, leaving a vacuum into which rival definitions of Brexit could rush. Within weeks of his exit, Brexit was redefined in the hardest terms. All these decisions by May and Cameron laid the path to the vote tonight. But, in truth, the path is much longer and older. For at least three decades, “Europe” served as the all-purpose bogeyman of British politics. Cheered on by a Europe‑loathing press, itself fuelled by an endless flow of straight banana-type lies, many of them concocted by a Telegraph correspondent in Brussels by the name of Boris Johnson, politicians of all stripes found it convenient to blame Brussels for any and all ills. (...) Or you could go further back still. The Suez fiasco of 1956 was meant to have cured Britain of its imperial delusion, but what’s clear now is that many Britons never quite made that adjustment. Underpinning Brexit, with its belief that Britain should separate itself from its closest neighbours, is a refusal to accept that we are one part of an interdependent European economy. For the Brexiteers, Britain remains a global Gulliver tied down for too long by the Lilliputians of Little Europe. It is a fundamental misreading of our place in the world. Perhaps, though, the seeds of the vote were planted in the rubble of Britain’s wartime experience. Never occupied, many Britons never understo

The German photographer Wolfgang Tillmans, who has been an outspoken critic of Brexit since the referendum in June 2016, is also calling for a second referendum after May’s defeat.

“I hate referendums, I love parliaments. But if this parliament can’t find a solution, how can the next one?” Tillmans wrote on Twitter. “Since we got to this situation because of a trust in referendums, let’s trust in a second one. The advantage would be that the British public would know what they are actually voting on.”

The British public was misinformed about what the people’s vote actually meant, Tillmans says. “Now people know, what it means to unravel 40 years of co-operation amongst neighbours and embark on a course of nationalism with the aid of Trump and Putin. Europe can’t afford to lose the UK, the UK can’t afford to be alone in a hostile world of autocrats.”

The usually profane British artist Jeremy Deller, whose anti-Brexit t-shirts replace the endings of well-known phrases and sayings with “Fuck Brexit”, simply says: “I have no idea, like everyone else.”

Speaking to the Guardian earlier this month, Turner Prize-winning Deller pondered that he should have produced his t-shirts during the Brexit campaign. “Humour is important in these conversations. It was probably used during the campaign but I can’t remember anyone using it. [Vote] Leave at least used imagery; they were cleverer with words and images, more viral,” he says.

Other artists who took to social media after May’s crushing defeat include Franko B, an Italian performance artist based in London. He posted on Twitter: “If [May] was brave she would call a new referendum, her party can’t touch her for another year!!!”

The British photographer Rankin offered a more optimistic view, posting on Instagram one of his images of a woman’s face painted a shimmering blue to look like the EU flag. The caption reads: “I still love EU”.