A three-way collaboration delves into the paradox of ‘commonwealth’

“There's nothing common in our wealth”: ICA in Virginia teams up with Philadelphia Contemporary and Beta-Local in San Juan to interrogate a concept 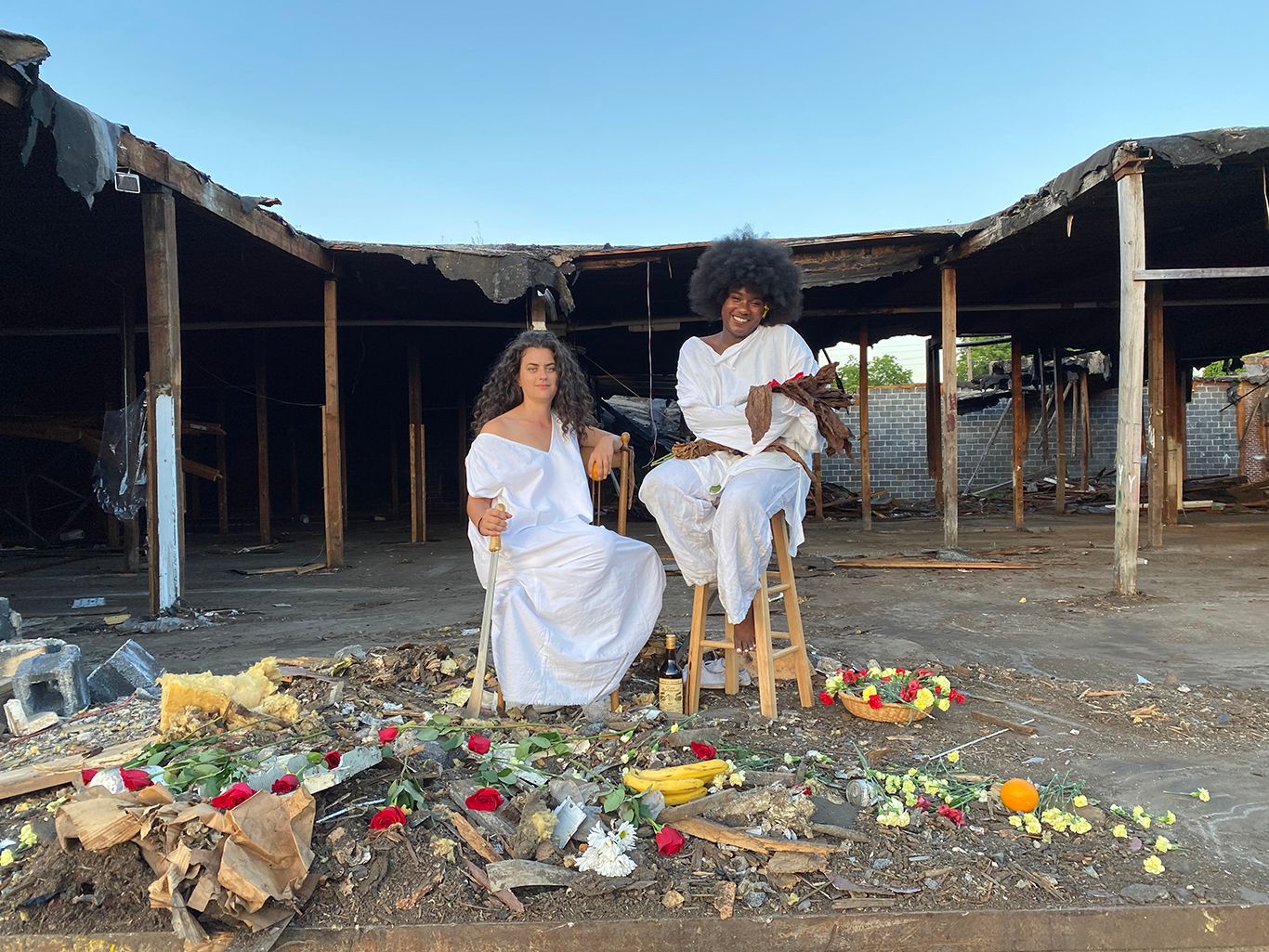 Christine Wyatt and Christina Leoni-Osion in a still from Alicia Díaz's video Entre Puerto Rico and Richmond: Women in Resistance Shall Not Be Moved (2020), co-created with Patricia Herrera, Wyatt, Leoni-Osion, Luis Vasquez La Roche, Héctor "Coco" Barez, Yaraní del Valle and David Riley, and to be released digitally Courtesy of the artist and collaborators

An unusual two-year partnership culminating this fall among the Institute for Contemporary Art (ICA) at Virginia Commonwealth University (VCU) in Richmond, Beta-Local in San Juan and Philadelphia Contemporary—each based in a US political territory designated a “commonwealth”—interrogates the meaning and paradox built into that term. Initially planned as a physical exhibition unfolding in chapters across the three cities, Commonwealth has morphed in response to the Covid-19 pandemic and Black Lives Matter protests, pushing each of the three very different contemporary arts organisations into new territory.

“The collaboration actually produced a new way of thinking institutionally about who we are as we had to negotiate our different needs,” says Noah Simblist, associate professor of art at VCU, who was approached by the ICA's chief curator, Stephanie Smith, who was interested in exploring the idea of commonwealth embedded in the university's name. Conversations then ensued between Smith and Nato Thompson at Philadelphia Contemporary, which had not previously worked with an organisation so far afield but quickly signed on as a partner. Together they reached out to Beta-Local, which was not immediately inclined to accept the invitation.

“For Puerto Rico, the reality of a commonwealth is quite different than the one in the States,” says Pablo Guardiola, one of three co-directors at Beta-Local, which typically collaborates with artists but not organisations in the continental US. “There's nothing in common in our wealth.” But they reconsidered after more conversations, viewing the project as a platform for lamenting Puerto Rico's political situation. A team of almost a dozen curators from the three organisations has co-commissioned nine artists’ projects engaging with the historical and conceptual meanings of commonwealth and how the lived reality has fallen short.

These go on view at the ICA on 12 September in the institute's first indoor/outdoor exhibition, including monumental murals by Monica Rodriguez and Firelei Baez blanketing three exterior walls of the building. In a score created by Nelson Rivera, a performer will come to the ICA's garden once a day with a bullhorn and read a series of political speeches in Spanish dating from Puerto Rico's struggle for independence. Carolina Caycedo's Distressed Debt, dealing with government-issued water bonds, will be installed inside, positioned near a large window and visible from outdoors. Duron Chavis's “resiliency garden”, an example of urban farming in a parking lot adjacent to the ICA, will now spell out “Black Space Matters” in large block letters, echoing the Black Lives Matter street murals that began in Washington, DC. The anti-racist group The Conciliation Project will perform in the ICA auditorium, although it remains to be determined whether it will broadcast live with a socially distanced audience or prerecord. 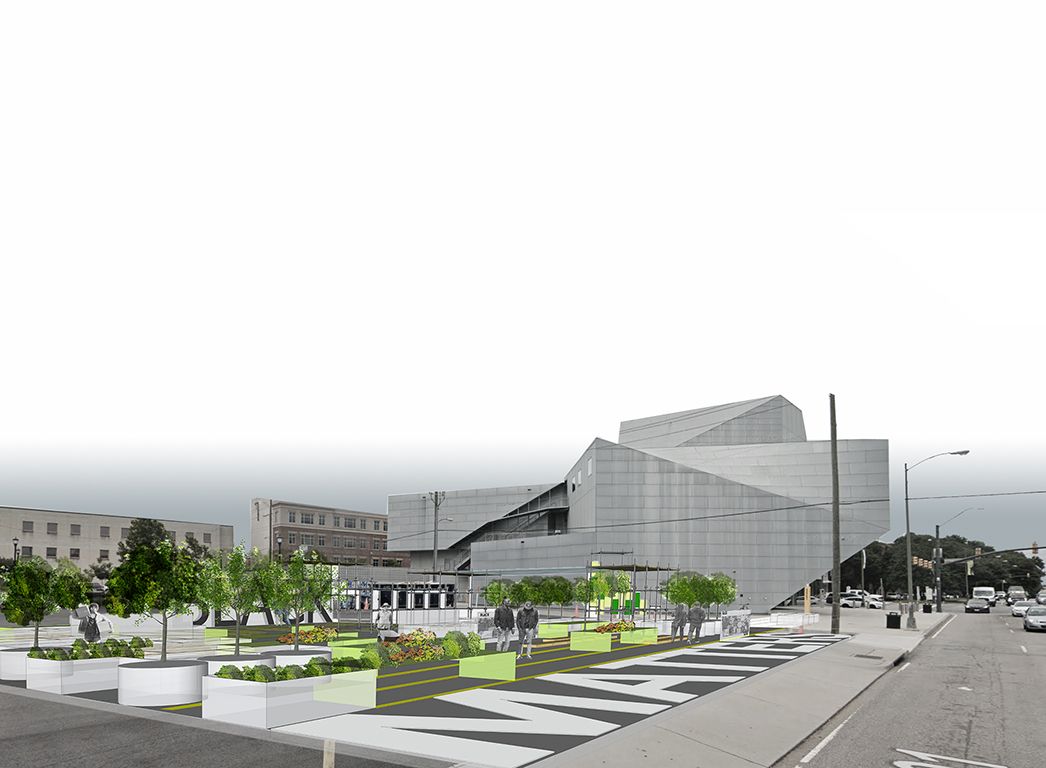 Concept drawing for Duron Chavis's Resiliency Garden (2020), with design by Quilian Riano of DSGN AGNC, planned for a parking lot next to the Institute for Contemporary Art at Virginia Commonwealth University in Richmond Courtesy of the artist and designer

Beta-Local and Philadelphia Contemporary, neither of which has its own exhibition galleries, initially planned to work with local spaces on hosting some of these projects but changed course with the onset of the pandemic. Now Beta-Local has taken the lead on a digital publication to be released serially in three issues beginning in October, with writings on the histories of self-determinacy in each of the three cities available in English and Spanish (as is every element of the exhibition and online programming). The publication will include video content, disseminating projects by Sharon Hayes, Alicia Díaz and Tanya Lukin Linklater.

Philadelphia Contemporary had planned to give some of its grant money from the William Penn Foundation for Commonwealth to six cultural nonprofits to commission art installations. But as Covid hit and the protests brought community needs into sharper focus, they expanded the initiative, making outright financial gifts to the nonprofits and to six more organisations dealing with issues like hunger and mental health.

“If you want to talk about the more utopian possibilities of commonwealth, pretty quickly it becomes about wealth-sharing,” says Kerry Bickford, director of programs at Philadelphia Contemporary. “When you've been handed foundation grants, you want to be doing that work yourself in a way that's equitable and helpful for the community.”