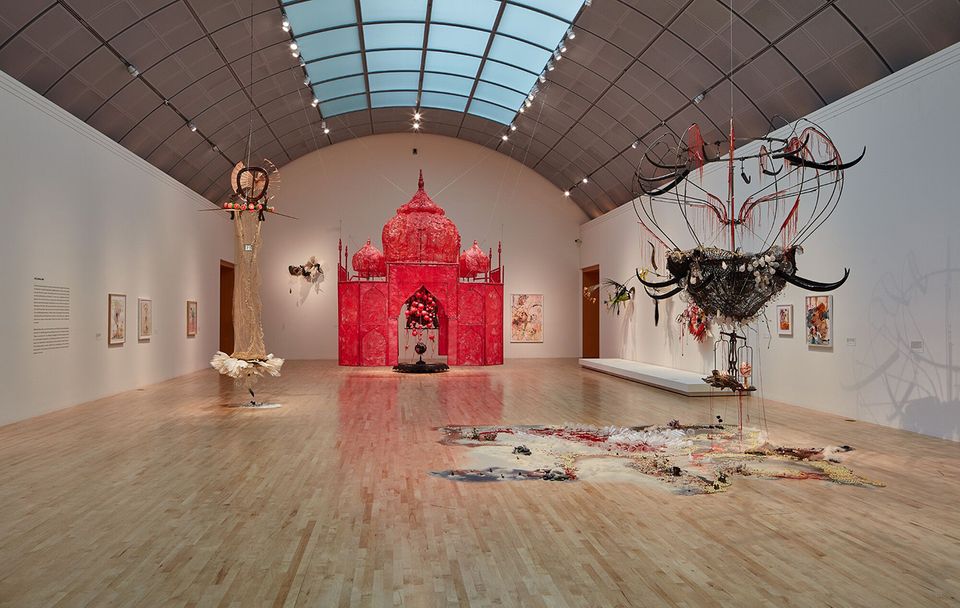 An installation view of Rina Banerjee: Make Me a Summary of the World at the San Jose Museum of Art JKA Photography

Women gained the right to vote through the 19th Amendment to the US Constitution in August 1920, and various cultural groups are getting ready to celebrate that centennial with themed events and exhibitions. But the San Jose Museum of Art got an early start, framing 2019 as the “year of visionary women artists.”

The institution kicked off the program in the spring with a pair of shows, one focusing on Jay DeFeo’s use of photography and another on the contemporary artist Catherine Wagner’s science-inspired imaging (think prints made from MRI machines). Currently on view at the museum, which marks its 50th anniversary this fall, is the first mid-career retrospective of the Calcutta-born, New York-based artist Rina Banerjee and new work by the Los Angeles artist Pae White.

“When you’re getting ready for an anniversary, you start mining your history to see what you want to celebrate, and for us it’s our visionary women founders and these women artists we wanted to show,” says the museum’s executive director, Susan Sayre Batton. She said the other impetus was the centennial of the votes in the US House and Senate for women’s suffrage in May and June of 1919.

The 19th Amendment was actually ratified on 18 August 1920, so most museums are planning related programs for next year. The Baltimore Museum of Art, for one, announced plans to reinstall some permanent collection galleries and organize women-focused exhibitions in 2020, including a Joan Mitchell retrospective, a survey of beaded works by 19th-century Lakota women and shows on Ana Mendieta, Lisa Yuskavage and Grace Hartigan.

As for next steps in San Jose, Batton says the museum will start mixing male artists back into the program this fall but she expects the enthusiasm for women artists among staff members and the public to continue. “One of the jokes people make about our museum is that the Guerrilla Girls are never going to protest here,” she says. “What we’re doing this year relates to a strong history of supporting, acquiring and exhibiting women artists.”