Defending problematic monuments as educational opportunities, the US president misidentifies a famous bronze as a presidential portrait in a Fox News interview 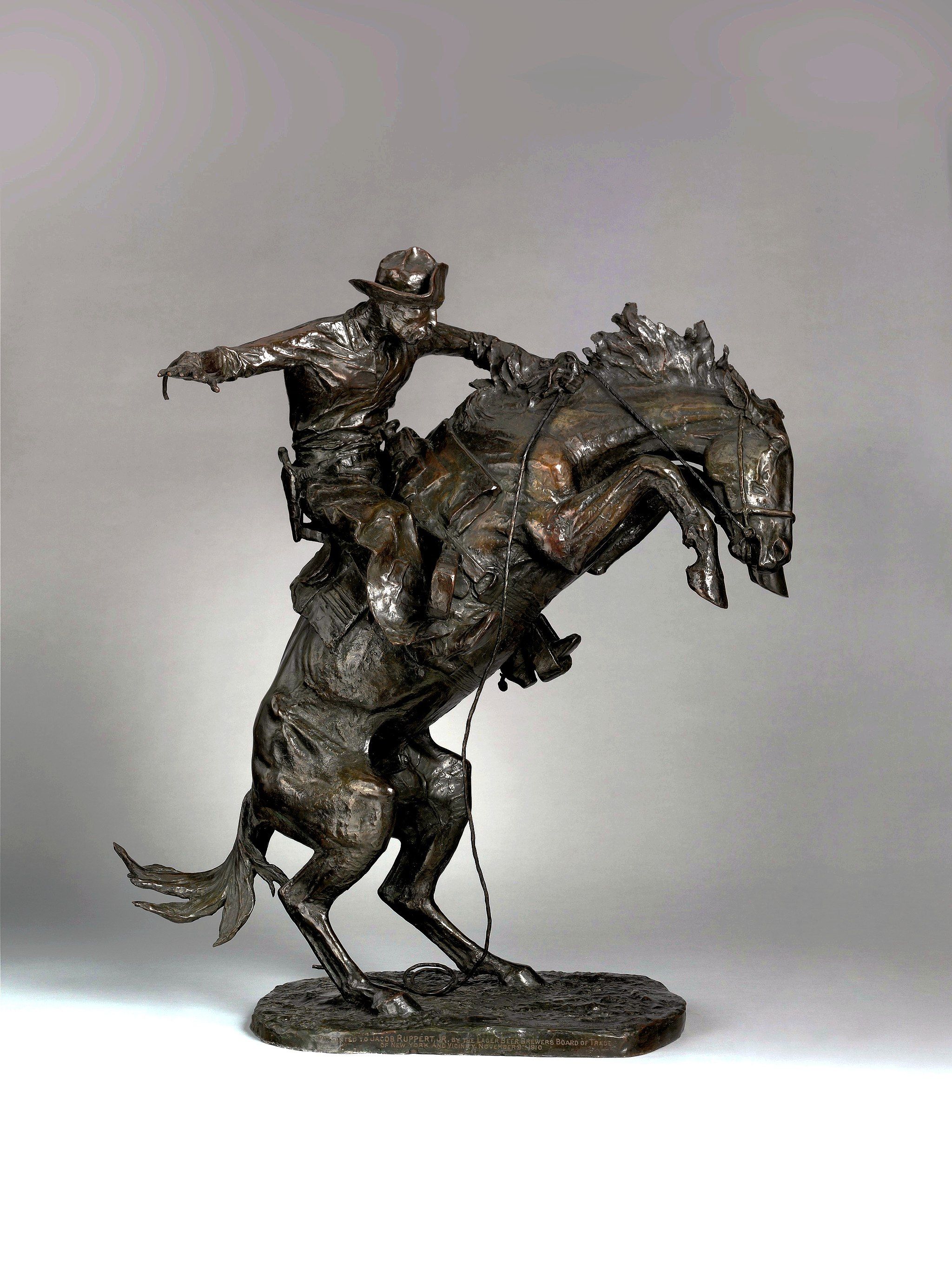 Frederic Remington's The Broncho Buster is not Teddy Roosevelt. Wikimedia

As statues glorifying white supremacy and colonialist figures find themselves under increased social scrutiny and attacks amid anti-racism protests, many conservatives in the US have claimed these monuments are essential for teaching American history to the public. That was the point President Trump was trying to make in a Fox News interview on Sunday as he gestured to a bronze horse-and-rider work on display in the Oval Office that he suggested was the likeness of former president Theodore Roosevelt, a controversial statue of whom is due to be removed from outside of the American Museum of Natural History in New York.

The only problem? It is not Roosevelt.

Instead, it is an unnamed fictional cowboy known as The Broncho Buster, made by the late 19th-century painter and illustrator Frederic Remington, who is best remembered for his idealised depictions of the American West.

In the interview, Fox News personality Brian Kilmeade explains that every president chooses what art goes in the Oval Office during his or her tenure and identifies some of the famous men around the room: “You chose Lincoln as a bust and Lincoln as a picture. You chose Andrew Jackson, and is that Teddy Roosevelt?”

“Yes,” Trump says about the bronze work that is not Roosevelt. “And by the way, they’re taking down the statue of...”

“Teddy Roosevelt,” Trump finally says after a pause. “So, explain that one.”

In an effort to clear up Trump’s confusion, here is the work's actual art historical background: Made in 1895, The Broncho Buster was one of Remington's first sculptures. It shows an unnamed cowboy breaking a wild horse, a symbol of “taming” the American West— something that is closely linked with Roosevelt’s long campaign to take over Indigenous land and an extension of the settler-colonial Manifest Destiny ethos that gripped the American imagination from the mid 1800s until now.

Remington was a commercial success in his lifetime and The Broncho Buster ultimately became the most popular small American bronze sculpture of the 19th century. Indeed, a later cast of it is in the collection of the Metropolitan Museum of Art in New York. It is not certain who the model for the figure is, but it is definitely not Roosevelt.

Laura Foster, the director of the Frederic Remington Museum in Ogdensburg, New York, says that the cowboy cast in the Oval Office has often been misconstrued as a gift from Remington to Roosevelt. 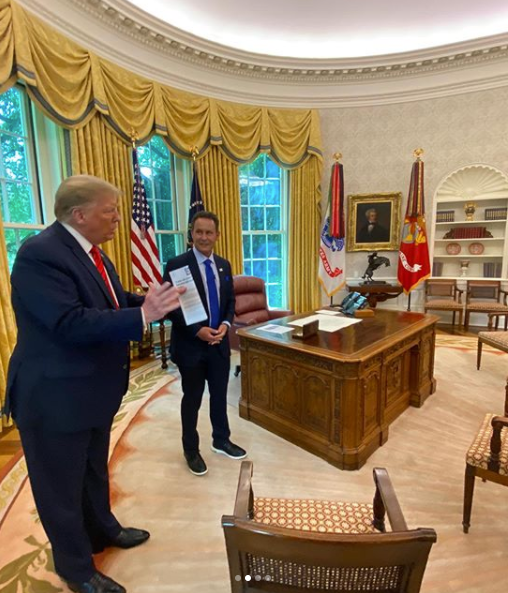 Fox News host Brian Kilmeade stands in the Oval Office with Trump, where Remington's sculpture can be seen in the background. Brian Kilmeade/Instagram

“In fact, another cast of the same sculpture was given to Roosevelt by the Rough Riders when they disbanded in 1899,” she explains. The short-lived Rough Riders were the first voluntary cavalry, raised by Roosevelt while he was still vice president under William McKinley to fight in the Spanish-American War. The largely one-sided struggle (since Spain had little military presence left in North America by 1898) ended Spanish colonial rule in the Americas and resulted in the liberation of Cuba and the US seizure of the Philippines, as well as Guam and Puerto Rico, both of which remain US territories today.

Roosevelt loved the sculpture, according to Foster, and an image of the bronze graced the cover of Pearson's magazine in the 1907 story the president wrote praising Remington's art. Indeed, the bronco bronze gifted to Roosevelt remains at his home, Sagamore Hill Historic Site in Cove Neck, New York, Foster explains, adding that the bronze Trump was referring to did not arrive to the White House until the mid-20th century.

“This is the first time we have heard of its being suggested as a Teddy Roosevelt portrait, which is certainly not the case,” Foster adds.

According to the White House Historical Association, the bronze in the Oval Office was partially inspired by the artist’s own illustrations made for a 1888 article in Century Magazine by Roosevelt about his life as a cattle rancher living on Dakota land. The Met, however, says that the Broncho Buster iconography was adapted from a slightly later drawing, Pitching Broncho, published in Harper's Weekly on 30 April 1892.

Where the artist derived the idea is secondary to the fact that it is, all told, just an idea. Remington pieces “seem to be everywhere”, writes the Akwesasne Mohawk artist Margaret Jacobs in a response to The Broncho Buster on the Met’s website. “I am now quick to spot them in museums, flea markets, movies and magazines.” She adds that the bronze represents the epitome of what many believed a cowboy to be and what Remington hoped he would embody, “the master of a nation born out of wilderness, subsisting on an unsettled, magical land”—an idea that does not take into account the fact that Native Americans already lived and thrived on that land.