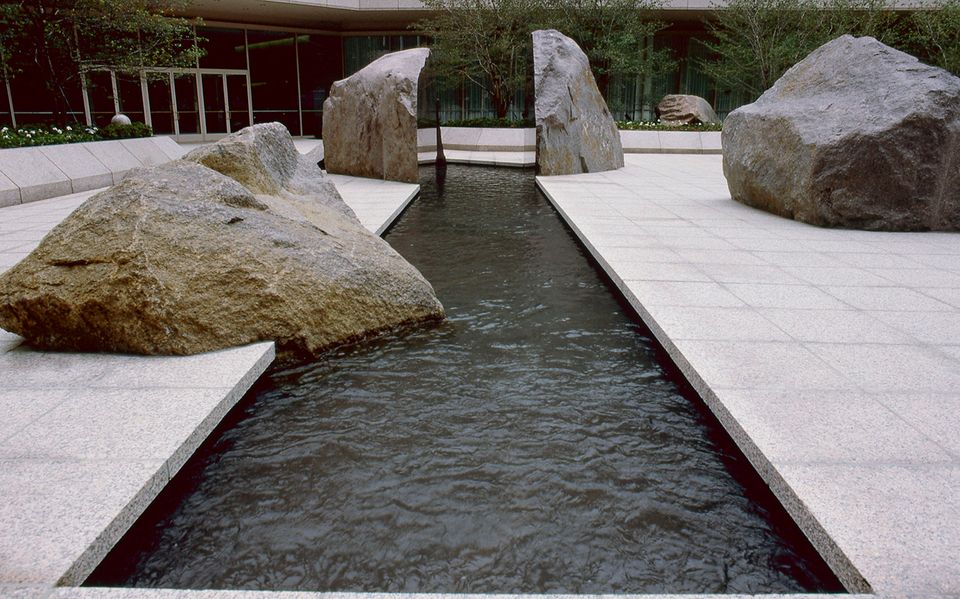 Marabar, a 1984 installation by Elyn Zimmerman on the National Geographic Society campus in Washington © Elyn Zimmerman, courtesy of the Cultural Landscape Foundation

With support from some prominent art-world figures, the non-profit Cultural Landscape Foundation is appealing to the National Geographic Society to forgo a plan to remove a widely admired site-specific sculptural installation from its Washington, DC campus as part of a renovation.

The installation, Marabar, completed in 1984 by the New York-based artist Elyn Zimmerman, is described by Adam Weinberg, the director of the Whitney Museum of American Art in New York, as a “masterpiece” whose “preservation is important—for the public as well as art history”. It is the artist’s first public sculpture and a “premier example” of her monolithic forms, Weinberg wrote in a letter last week to the Historic Preservation Review Board of the District of Columbia, which oversees approvals of the National Geographic Society’s proposed renovation because it lies in a historic district.

The project calls for eliminating the sculptural installation, set on a plaza, to make way for a new entrance pavilion and events space for the National Geographic headquarters between 16th and 17th Streets along M Street in Washington.

The central feature of the Zimmerman work is a 6ft-by-60ft reflecting pool set amid five granite boulders, three of which have highly polished surfaces that reflect one another across the pool. Seven other boulders are positioned throughout nearby gardens. Arguing that the work is of extraordinary significance and should be preserved, the Cultural Landscape Foundation sent a letter to the Historic Preservation Review Board on 1 April asking it to reconsider its earlier approval of the project.

Calls and emails to the National Geographic Society on Tuesday and today were not immediately returned. But in an 8 April letter to the foundation, the society said it had offered to relocate the boulders to a site of the artist’s choosing and hence the work was not being destroyed. “We offered to facilitate relocation of the sculpture’s granite stones, some of which are quite massive,” wrote Angelo M. Grima, executive vice president and general counsel for the society, in the letter, shared by the foundation.

The foundation counters that dismembering a site-specific installation amounts to demolishing it.

In addition to her drawings and photography, Zimmerman, 74, is known for sculptural projects including public commissions for the Institute for Advanced Studies in Princeton, New Jersey; the 1980 Winter Olympics in Lake Placid, New York; a plaza at Market Street in San Francisco; the Sydney and Walda Besthoff Sculpture Garden at the New Orleans Museum of Art in Louisiana; the US embassy in Dar es Salaam, Tanzania; and a prominent project in the city center of Vancouver, among others. Memorably, she created a granite fountain commemorating the 1993 parking-garage bombing at the World Trade Center that was later destroyed in the 9/11 terrorist attacks of 2001. Weinberg notes that she is one of the few female artists of her generation to produce monumental stone sculpture and Land Art.

The architect David Childs recruited Zimmerman to create the National Geographic Society’s installation in the early 1980s when he and his firm, Skidmore, Owings and Merrill, were designing a building for the society’s complex, which has seen several additions over the years. He has also submitted a plea to the Historical Preservation Review Board, recalling that when Zimmerman first presented her sculptural proposal, “the chairman of the Geographic’s Board led a standing ovation for Elyn’s design.”

The foundation says it is unclear, based on project renderings, whether the review board was even aware of the sculptural installation or its significance.

“Elyn’s work is actually the jewel in the setting” of the campus, Charles A. Birnbaum, president, chief executive and founder of the foundation, said in an interview. His organisation was created in 1998 to document cultural landscapes and to advocate for continued stewardship of such sites.

He said he saw a paradox in the National Geographic Society’s move to dispense with Zimmerman’s installation, given the quality of care it had given it over the decades. “What we see is that very often landscape [art] falls into disrepair,” Birnbaum said. “There’s often pressure to tear it out and redesign it. In this case we don’t have to squint to see what the artist intended. We can still see the power of the piece because the society has been such a good steward.”

Among the art world figures who have written to the review board in defense of Zimmerman’s work is Penny Balkin Bach, the executive director and chief curator of the Association for Public Art.

“We were shocked to learn that Marabar in its setting might be destroyed, given the importance of the artwork, duration of its placement, stature of the artist and the role that the National Geographic Society plays ‘to protect the wonder of the world’,” Bach wrote. “We feel confident that the District of Columbia’s Historic Preservation Review Board—with greater understanding of the significance of Marabar—will revisit and reconsider approval of the plans for the newly designed plaza.”

In another letter to the review board, the critic Marc Treib, professor of architecture emeritus at the University of California at Berkeley, wrote that Marabar “is a key representative of American site-specific art, elegant in its form, impressive in its use of stone, and engaging in its effects”.

And unlike many works of environmental art, he pointed out, it is accessible: “It is certainly one of the great works of the later 20th century, and one of the few located in a city.”

Reached by phone, Zimmerman said she was appreciative of the foundation’s efforts to preserve her work. “This is a well-liked project—I never read any bad press about it—and I think it would be a shame if it were to go away,” she said. She called the plan to remake the plaza “unsophisticated—it’s very, I would even say, banal.”

“It was very popular and everyone seemed to be happy with how it came out and I never thought it would be going anywhere,” she said of her installation.

This article has been updated to report the submission of a letter to the District of Columbia's Historic Preservation Review Board by the architect David Childs.