Art world faces up to the reality of climate crisis 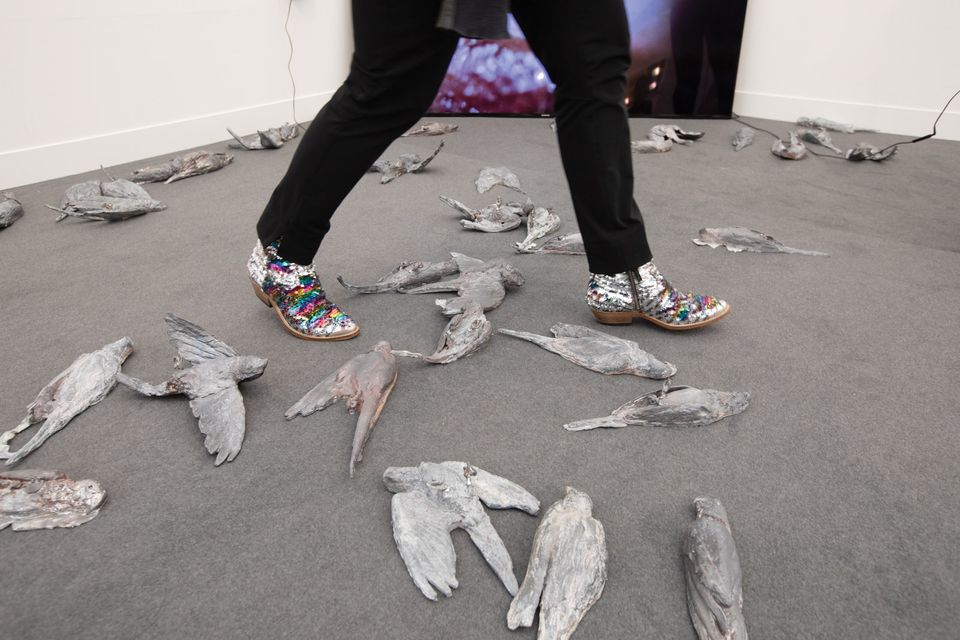 For the past two decades, the art world has fully embraced globalisation. But now, in light of the climate crisis, many in the trade are looking closer to home when it comes to where and how they do business. In the case of mammoth pop-up events such as Frieze, one’s carbon footprint has become the biggest issue.

Members of the climate change group Extinction Rebellion gathered at the entrance to Frieze London yesterday in a bid to engage the VIPs pouring into the fair. The aim, says activist Will Skeaping, is to get those in a position of power to recognise their part in the climate emergency. “The amount of money spent on art is outrageous compared to what is spent on fighting the climate crisis,” he says. “No one will care about art when the food runs out.” The activist group is urging collectors to swap their Manolo Blahniks for trainers and walk between Frieze London and Frieze Masters instead of taking a shuttle. Extinction Rebellion is also hosting a talk at the fair on Sunday, with its London-wide protests due to begin the following day.

Other interventions staged at Frieze London yesterday included a protest by the artist and academic Kate McMillan, and a piece by Massimo Agostinelli, which consisted of a block of ice left to melt outside the fair’s entrance. The less compelling version of Olafur Eliasson’s Ice Watch was swiftly removed by security. Agostinelli says the work “is a visual reminder of the fragility and temporality of our environment”.

Although there are no immediate plans for Frieze to sign the Culture Declares Emergency pledge, the fair has made efforts to reduce its carbon footprint by switching to a more effective renewable biofuel this year. In an email sent to dealers last week, Frieze’s director Victoria Siddall called on galleries to work with the fair to ship art by land and sea. “There is still plenty of work to be done and we are reliant on your support and advice to achieve this,” she says.

As Siddall notes, dealers are already taking steps to become more eco-friendly. Sree Goswami, the founder of Mumbai’s Project 88, has shipped works by sea for the past three years. She now chooses to do three art fairs annually: in Asia, the US and Europe. “It’s about achieving a balance; we have to maintain our international business,” she says. Many of her artists address climate change in their work, including Bangladeshi Munem Wasif, who is showing cyanotype prints of grains of rice, priced at £15,000.

London’s Kate MacGarry is among a growing group of dealers who are embracing a more local approach, choosing to participate in fairs closer to home. “In the art world, the word ‘local’ has a stigma attached to it; it’s always been about the international,” she says. “But now we need to look more locally in terms of food, travel—and art.” This year, MacGarry is doing Fiac in Paris for the first time: “It’s on our doorstep and we can get there in two hours by train.”

She is also exploring the use of biodegradable materials such as packaging made from mycelium, a fungus-based product. However, she stresses that such moves are a drop in the ocean, and government intervention is crucial to bring about any real change.

This year’s Frieze Artist Award winner is Himali Singh Soin, whose film We Are Opposite Like That II (2019) explores today’s climate emergency. Meanwhile, packing a punch on Seventeen’s stand is Patrick Goddard’s Blue Sky Thinking (2019), priced at £18,000 and featuring 180 dead ring-necked parakeets made from salvaged lead. The gallery’s director Dave Hoyland says: “It’s going to take a disaster like all the birds dying for people to take notice of the climate crisis.”

Kate McMillan suggests that the art fair model needs to be radically overhauled. “Frieze Art Fair, and the art market more broadly, is like capitalism on speed. We are not the liberal, progressive sector we like to think we are—quite the opposite,” she says. “How many flights we take and the journey of the art we buy is just the beginning of these questions. We need to come up with new, sustainable models that walk more lightly in this world, and questioning the art fair must happen straight away.”