The artists at the forefront of Russia's democracy protests

Street art and digital art used as tools of subversion, as artists themselves bear the brunt of a brutal government crackdown 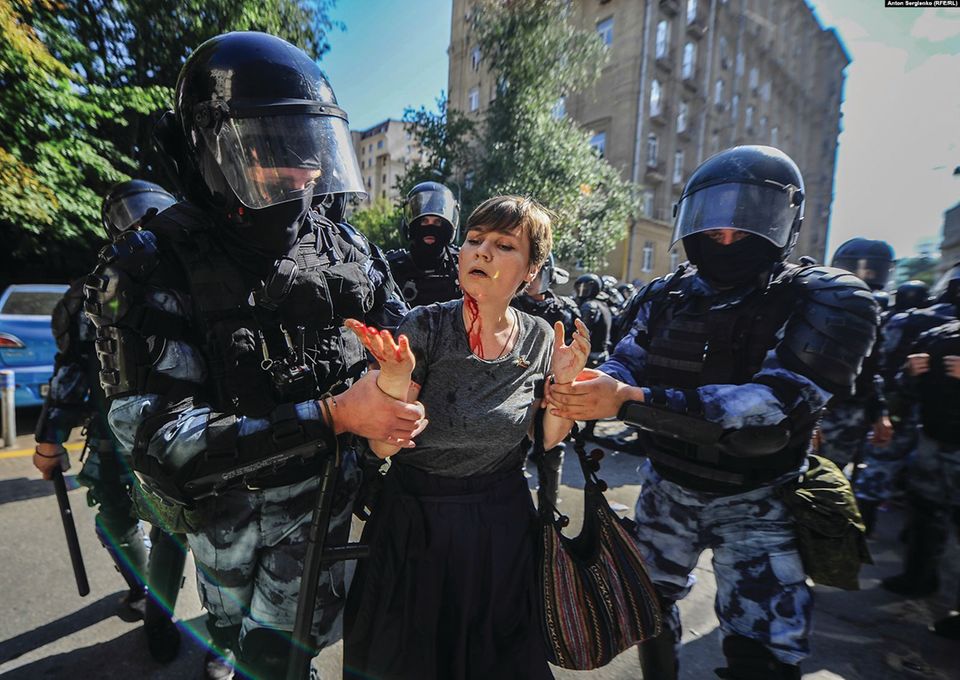 Alexsandra Parushina, an artist and district legislator, is led away from a protest after being beaten by riot police © Anton Sergienko

Waves of pro-democracy protests have been sweeping across Moscow this summer—and artists have been front and centre of them. The demonstrations were triggered by the disqualification of independent candidates from Moscow city elections and have been met with a violent police crackdown. The standoff has revealed cracks in the city’s sophisticated youth-oriented veneer and its lack of democratic freedoms.

One of the leaders of the protests has been Aleksandra Parushina, an artist and anti-government district legislator known for her battles to save architectural heritage from destruction by property developers tied to corrupt officials.

She suffered a concussion after being beaten by riot police on 27 July; the image of her being led away by them, blood pouring down her face, has become a symbol of the protests.

One the same day, police tackled a young jogger, Constantin Konovalov, running past the Moscow mayor’s office, where protesters were scheduled to convene. Police broke his leg while pressing him to the ground. Konovalov, who is a designer, worked with the Art.Lebedev Studio to create the logo for the Moscow metro.

The protests have also inspired street art, although local authorities are trying to both harness its power by sponsoring festivals while at the same time fighting politically unacceptable content.

In the city of Yekaterinburg in July, officials came to the defence of the artist Pokras Lampas after workers began paving over his huge cross-shaped Malevich-inspired work created as part of an officially sanctioned festival. But city officials in Moscow, meanwhile, were quick to paint over the work of a street artist called Zoom that riffed on an I ♥ Moscow logo by replacing the heart with handcuffs.

Online, artists are taking to Twitter and other social media platforms to express their frustration through memes. The anonymous Twitter artist @Zimorodok_mult went viral in August over works he posted that inserted Russian riot police into famous images, ranging from the Apollo moon landing and Picasso’s Young Acrobat on a Ball (1905) to classic Russian paintings such as Ilya Repin’s Ivan the Terrible and His Son Ivan (1885) and Valentin Serov’s Girl with Peaches (1887). In the case of the Picasso work, masked riot police in camouflage and bulletproof vests are shown hauling away the painting’s acrobat while its strongman films the scene on a smartphone.

Some have compared the posts to Sots Art, or Soviet Pop Art, of the 1970s, which subverted Soviet Realism through Pop Art. An August editorial in the lifestyle magazine Moskvich Mag said: “It’s funny how political caricature is becoming greater than its parts—Zimorodok’s inspiration was clearly a meme-generating programme that adds troops in helmets to any photo. But in fact, the artist ended up with a kind of replica of the Sots Art of the pre-Perestroika years, a style for all practical purposes founded by Russian artists Vitaly Komar and Alexander Melamid. True, they were engaged in ironic post-Modernist play with Soviet symbols, while Zimorodok is playing with contemporary post-Soviet ones.”

Political analysts have described artists as a new political force. Aleksandr Morozov, a political commentator, wrote on his Facebook profile in August about the emergence of “guerrilla activities by art groups—the appearance of graffiti, posters, banners, and art objects united by a common theme.”

Works addressing the catastrophic forest fires that raged across Siberia in July also continue to appear. An artist named Loketski created an installation in St Petersburg’s Shuvalovsky Park out of a charred tree stump referencing a famous Second World War poster image called The Motherland is Calling Us. He renamed the poster Economically Unviable Mother, accompanying it by an Instagram manifesto bitterly mocking the Russian government for offering to help put out fires in the US, Israel and Greece, while downplaying fires at home.