Put your art where your mouth is: leading British artists design masks for charity

UPDATE 5 June: The CAS Rapid Response Fund has raised more than £100,000 from the limited-edition facemasks campaign, far surpassing its initial £20,000 target with just under a week to go. The fund now totals more than £200,000 and this week the first three recipients were announced, with more to be rolled out each month. The artist Eleanor Lakelin has been commissioned to create a work commemorating Oscar Wilde for Reading Museum, using timber from trees recently felled near the prison where the writer was once incarcerated. Glasgow’s Gallery of Modern Art will receive three works by Rabiya Choudhry, celebrating the city’s Asian shop owners, essential workers during the Covid-19 crisis and addressing mental health. Liverpool’s Victoria Gallery & Museum will receive a room-sized body of work by the Granby Workshop, which was founded by the Assemble collective, winners of the 2015 Turner Prize. UPDATE (8 July): CAS has spent more than £90,000 (out of a total of £234,000) helping support six artists and six museums. This includes a room-scale installation for MIMA Middlesbrough by Sonia Boyce called Devotional Wallpaper and Placards, 2008-2020. Elinor Morgan, head of programme at MIMA, part of Teesside University, says: “The work will be shown as part of a large-scale exhibition by Boyce, titled In The Castle of My Skin, at MIMA in 2021." CAS has also bought two works by African American artist Shawanda Corbett for the Harris Museum in Preston as part of the Rapid Response Fund: a ceramic pairing called Graveyard Shift (2020) and a work on paper, Let’s play hide-n-seek (2020). 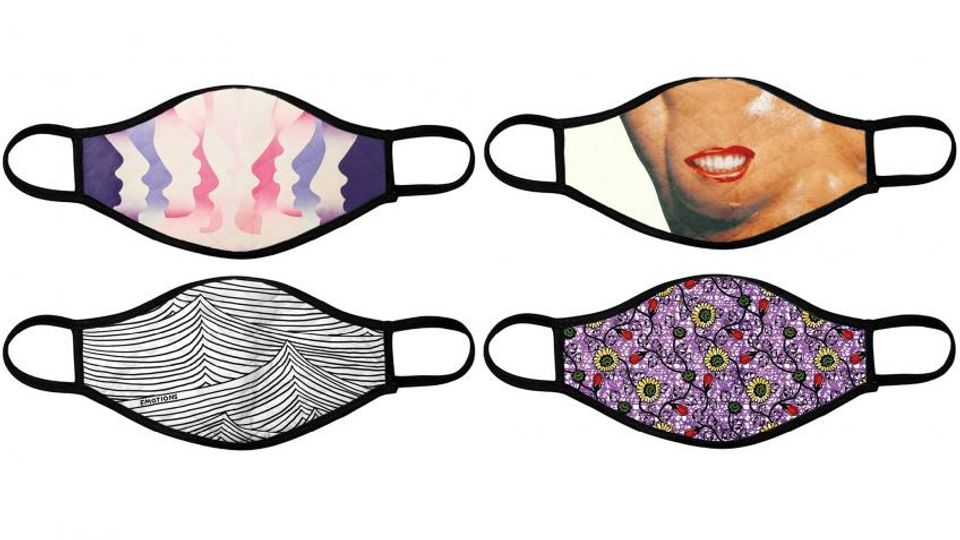 The four masks are available for £120, or £35 each, as part of a crowdfunding initiative launched by the Contemporary Art Society charity Courtesy of CAS

Artists David Shrigley, Eddie Peake, Linder and Yinka Shonibare have designed a set of limited-edition facemasks for a fundraising campaign supporting UK museums and artists in the wake of the coronavirus outbreak. The four masks are available for £120, or £35 each, as part of a crowdfunding initiative launched by the charity Contemporary Art Society (CAS).

The campaign, organised in partnership with Frieze London, is called the CAS Rapid Response Fund; museums that subscribe to the Contemporary Art Society as members (71 in total) can apply to the fund to buy works, supporting artists.

“Money raised will be spent purchasing works by British-based artists, providing financial support to artists, [and an ecosystem of] technicians and art handlers, many of whom work on a freelance basis and have seen their income streams decimated over recent weeks, due to the Covid-19 pandemic,” says a CAS statement.

Shrigley’s design shows a series of peaks along with the word “emotions”. He says in a statement: “My design perhaps acknowledges that our emotions are more difficult to see when we wear a mask.” Shonibare’s mask is emblazoned with the artist’s vivid Dutch wax-printed fabrics while Linder’s piece shows a mouth grafted on to a body part (detail from the 1977 record cover for Orgasm Addict by the Buzzcocks). Caroline Douglas, the director of CAS, tells The Art Newspaper: “We had instantaneous reactions from all four artists who were happy to help.”

The fund has already raised £100,000 through CAS patrons, which will support around ten acquisitions; the crowdfunding campaign hopes to hit a target of £20,000 by 10 June.

The first round of purchasing will be announced next month; museums must make a case for how a specific “work will support their engagement with local communities when they reopen”, says the CAS.

Douglas adds: “Crucially, we understand how hard artists have been hit by the pandemic; some of them lost their income overnight and don’t qualify for government support. Meanwhile, the museum sector was already in a weakened state after ten years of austerity. We’ve designed this fund to help the museums make the case for their importance; museums can provide a place of solace for people and the histories they hold help give us a sense of self. Museums will also be leaning much more heavily on their collections; we want to help them keep those collections dynamic and relevant.”