At Art Basel, dealers are looking to reap the rewards of the Venice Biennale

It is an open secret that sales are made in Venice, but dealers at the Swiss art fair are looking to capitalise on the buzz the Biennale creates 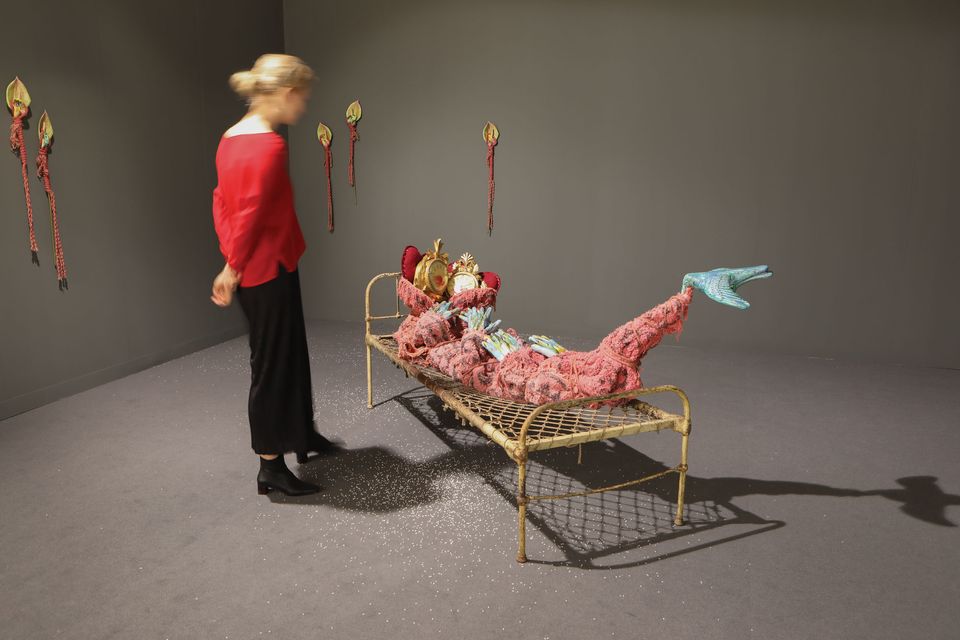 Time after Time is Our Time (2019), at Temnikova & Kasela Gallery’s stand at Art Basel, is by Kris Lemsalu, who is representing Estonia at the Venice Biennale © David Owens

“See in Venice, buy in Basel” goes the adage in the art world.

The thundering herd of the art world – collectors, curators, dealers, advisors – is now surging into Basel after an overpowering week in La Serenissima.

Held barely a month apart, the Venice Biennale and Art Basel might seem like different beasts: one a non-commercial celebration of contemporary art; the other the foremost commercial art fair. But it is more complicated than that. The two events are interdependent in many ways: an exhibition in Venice provides a powerful endorsement of an artist’s work, which in turn has an impact on prices and reputation. Venice offers collectors first dibs on new and ambitious work, and for dealers the chance to gauge interest in sometimes hitherto unknown names. And there is no doubt that sales were made there, borne out by the 100-plus shows held in addition to the official programme of 90 national pavilions and 21 collateral events.

Many of these other shows were at least partially paid for by dealers, who often also contributed to their artists’ participation in the Giardini or in the main, most-watched exhibition, Ralph Rugoff’s May You Live in Interesting Times. Indeed, everyone in the art world would have been bombarded in the weeks leading up to the Venetian extravaganza, with information about the shows and invitations to the multiple celebratory parties.

Among the glut of dealer-supported shows in Venice are: Adrian Ghenie at the Palazzo Cini with help from Galerie Thaddaeus Ropac; Georg Baselitz at the Accademia, thanks to Gagosian (the first time a living artist has shown in the venerable institution); Emilio Vedova, curated by Baselitz at the eponymous foundation; a group of 17 designers in Dysfunctional at the Ca’ d’Oro; Helen Frankenthaler at the Palazzo Grimani – the list goes on and on.

It is an open secret that deals are negotiated in Venice. “Of course, I am always offered works at biennials—and not just here,” a Brazilian collector tells The Art Newspaper. But some galleries say works are not actually for sale during Venice. “In order to respect the integrity of the Biennale and institutions, for any exhibition that’s part of the Biennale, or an institutional show that includes loans by us, the works are either sold before they get to Venice, or after, when the works have returned from Venice,” the gallerist Thaddaeus Ropac says.

His gallery is supporting Lee Bul, Baselitz, Vedova and Ghenie in Venice, and is showing works by the first three artists in Basel.

Carpenters Workshop Gallery, which organised the design show at Ca’ d’Oro, says that works exhibited in Venice would only be available after the show ended on 24 November. However, at Design Miami/Basel this week, the gallery is displaying a new clock by Maarten Baas, one of the 17 designers featured at Ca’ d’Oro.

White Cube, whose artist Ibrahim Mahama is among those in the first, and much admired, Ghanaian pavilion, is offering his work at Art Basel. Also at the fair, South Africa’s Stevenson gallery is featuring Zanele Muholi, Kemang Wa Lehulere and Mawande Ka Zenzile—all of whom have works in Venice. Galerie Nordenhake has brought collages by Frida Orupabo—one of the artists selected for Rugoff’s exhibition. And Temnikova & Kasela Gallery is showing Kris Lemsalu, who is representing Estonia at the Biennale.

For dealers, while such selections are the ultimate crowning of their efforts to support and promote artists, they come at a cost. Gallerist Annamária Molnár, whose artist Tamás Waliczky is representing Hungary, explains: “I contributed to the [Venice] project in many ways: organised a solo show for the artist in my gallery right before the Biennale application process, and suggested the curator to the artist. I do the lion’s share of the international communication, including preparation and on-the-spot activities at my own cost.”

It is an open secret that deals are negotiated in Venice

The Modern Institute of Glasgow is showing work at Art Basel by Cathy Wilkes, the British selection for Venice, and according to a spokeswoman for the British Council, the gallery supported her pavilion exhibition in “multiple ways, including financially”. That support helped towards the cost of the commission, which was around £600,000.

But maybe the most expensive backing in Venice came from mega-player Hauser & Wirth. The gallery is a supporter of the Venetian exhibitions by Arshile Gorky and Günther Förg, and is offering other works by these artists in Basel, as well as pieces by Martin Puryear, who is representing the US. Hauser also partially funded the controversial Christoph Büchel installation, Barca Nostra, a fishing vessel that sank in 2015 with up to 1,100 migrants on board, displayed as part of the main Biennale exhibition, without a label or explanation during the vernissage. A spokeswoman for Hauser tells The Art Newspaper: “The Büchel project is entirely non-commercial. He has requested that the only information given is the [press] release, and we have to respect his wishes.”