The boat, which has rescued 89 people so far, boasts work by the British street artist on its side 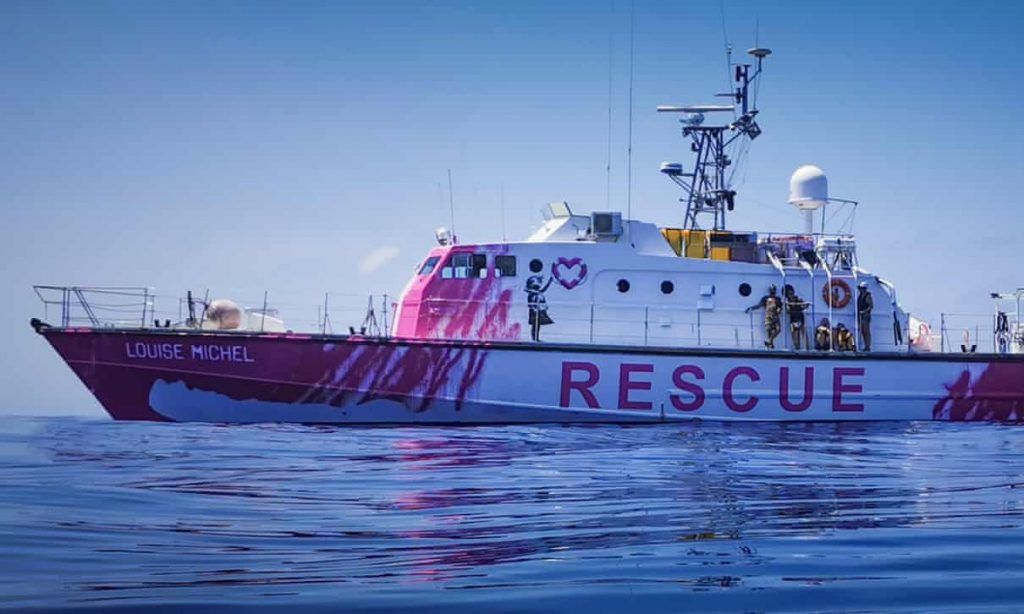 The vessel, which set sail in secret to avoid the attention of authorities from the Spanish port of Burriana on 18 August, rescued 89 people in distress in the Mediterranean Sea on Wednesday, according to the Guardian, which first reported the news.

It is named Louise Michel, after the 19th century French feminist and anarchist who played a major role in the Paris Commune. Featured on the boat's side is a Banksy artwork depicting a girl in a life vest, riffing on his iconic Balloon Girl work. Sailing under a German flag, the Louise Michel is crewed by activists who have worked in search-and-rescue missions with Sea-Watch, an NGO that patrols the Mediterranean to rescue migrants.

The artist reportedly reached out to Pia Klemp, the former captain of several other rescue boats, last September to ask how he might be able to help her cause.

“Hello Pia, I’ve read about your story in the papers. You sound like a badass,” he wrote. “I am an artist from the UK and I’ve made some work about the migrant crisis, obviously I can’t keep the money. Could you use it to buy a new boat or something? Please let me know. Well done. Banksy.”

According to the Guardian, Kemp said that she initially thought the message was a joke but later accepted the artist's offer of help, with the understanding that his involvement would be limited to financial support.

The Louise Michel is smaller but faster than most NGO ships used for the same purpose. The ship is reportedly currently in search for a safe seaport to either allow the passengers to disembark or transfer them to a European coastguard ship.

In June, three Banksy oil paintings which reference Europe's migrant crisis sold for £2.2m in a Sotheby's charity auction raising money for a hospital in Bethlehem.

The anonymous Bristol-born artist has long made works referencing the ongoing issue. Last year, he left his mark on the Venice Biennale with a stencil of a migrant child wearing a lifejacket holding aloft a neon pink flare. Other similar works include a 2105 image of Steve Jobs, the founder of Apple, with a black trash bag thrown over his shoulder and a computer in his hand spray painted on a wall in the Calais refugee camp called “the Jungle”. Around the same time, the artist also painted across several walls at the French port, including a riff on Theodore Gericault’s Raft of the Medusa, which featured drowning migrants trying to wave down a passing luxury yacht.

about 13 hours ago
Missing for decades, a Jacob Lawrence painting surfaces in response to a Met exhibition