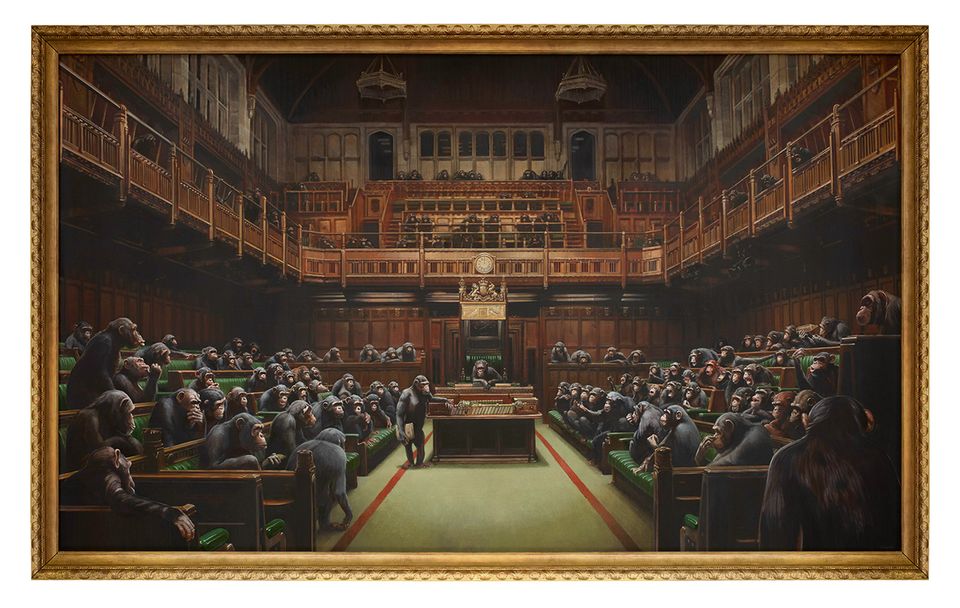 Sotheby’s was on high alert on 3 October when Banksy’s Devolved Parliament, a four-metre-wide Victorian-style oil painting depicting a House of Commons chamber packed with chimpanzees, came to auction.

At the entrance to the auction house, visitors had to pass through a metal detector, and the canvas was removed from the saleroom an hour before the auction began. “After last year, can you blame us?” said the company’s head of security, who kept a firm eye on members of Banksy’s authenticating service Pest Control throughout the sale.

He was referring to what is arguably the most famous stunt in recent art history, when Banksy’s Girl With Balloon painting mechanically shredded itself live at its 2018 auction.

This time round it was less prank, more pantomime. For 13 minutes, more than ten bidders vied for Devolved Parliament, including the Czech data analyst and collector Matyas Kodl. The painting eventually went to an unnamed collector bidding on the phone via Emma Baker, Sotheby’s head of evening sales, for an astonishing £8.5m (£9.9m with fees), trouncing Banksy’s previous record of £1.5m for Keep It Spotless.

Rumours swirled around the identity of the Devolved Parliament consignor, a British man said to have hung the work in his office. According to the Sotheby’s catalogue, he had bought the canvas from the artist in 2011. Reworkings to the painting since it was exhibited—including the snuffing out of two chandeliers and the turning upside down of a banana—fuelled speculation that Banksy or his associates was the seller.

The artist Mike Snelle, one half of the Connor Brothers duo, thinks not. “My understanding of the situation is that when the painting was sold Banksy wasn’t entirely happy with it, so he took it back to the studio to rework it before it was delivered to the buyer. People speculate about the changes, but the explanation is pretty straightforward.”

The timing of the Sotheby’s auction created the perfect market storm, coming as it did exactly four weeks before the revised Brexit deadline and a year after the Girl With Balloon stunt. “There are always conspiracy theories where Banksy is involved, but this painting has been in a private collection since 2011,” Snelle says. “The owner was smart and knew the timing was perfect. There’s nothing more to it than that.”

Straight after the sale, Banksy took to Instagram to air his views on the record price, quoting the art critic Robert Hughes: “The price of a work of art is now part of its function, its new job is to sit on the wall and get more expensive.” Of his painting, Banksy lamented: “Shame I didn’t still own it.”

Banksy has a long history of poking fun at the market, but there are signs that he is attempting to wrest back some control. With no gallery representing him, his Pest Control authenticating service is “the sole point of sale for new work”, while his latest venture, an online merchandise store called Gross Domestic Product, promises to shake up the market yet again. There are also plans for an “approved used Banksy dealership” called Bbay—a sign he may be moving into secondary market territory?

We can’t ever weed out all the people who just want to flip for profit, but we can weed out the unfunny one

Perhaps not, but vetting buyers in a bid to prevent his works being flipped appears to be the artist’s priority. With prices in the online store ranging from £10 for a branded mug to £850 for a Stormzy stab vest, Banksy has asked “wealthy collectors” to refrain from registering as the first consignment has been priced “far below market value”. Speculators have also been warned off. According to the terms and conditions, GDP can refuse an order “if an item is offered for sale on the secondary market before receipt, or if GDP reasonably believes that it might be offered for sale before or after receipt”. Meanwhile, Pest Control has placed a two-year restriction on the issue of certificates of authenticity, effectively stopping people from reselling in that time. Separate sales agreements may even be applied.

It is all dressed up as humorous. Potential buyers must answer the question “does art matter?” Responses will be judged by the comedian Adam Bloom.

“We can’t ever weed out all the people who just want to flip for profit, but we can weed out the unfunny ones,” Banksy says. In an art market that is so often far removed from reality, laughter probably is the best recourse.