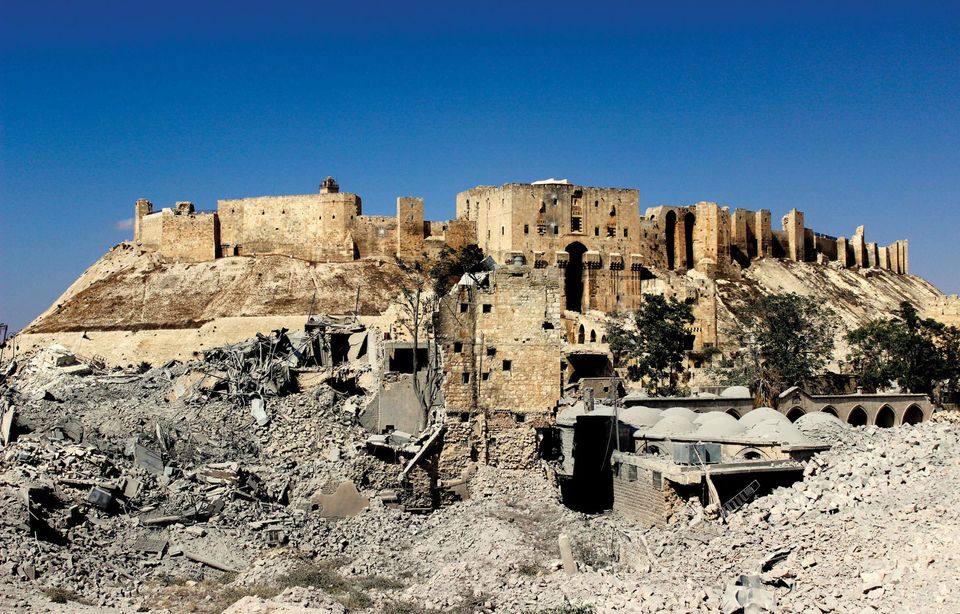 The entrace to the Citadel of Aleppo, with the ruins of the Khusruwiyah Mosque and the Carlton Hotel © Sultan Kitaz, 2014

Rami Alafandi, a Syrian archaeologist, left Aleppo in September 2012, weeks before all flights from the airport were suspended. He spent the next five years in Malaysia working on a doctorate focused on the ornately decorated Ottoman-era wood panelling in 12 stately Aleppo houses. From there he came to Berlin, where his research could support preparations for the reconstruction of his homeland’s tattered heritage.

Between 2006 and 2010, Alafandi had shot hundreds of photographs and video footage of the Aleppine houses. His pre-war photographs of buildings such as Beit Ghazaleh, a 17th-century house that was restored in 2009-10 to serve as the Memory Museum of the City of Aleppo, have taken on new significance in light of the severe war damage they have suffered since. “Almost all the panels in Beit Ghazaleh were removed,” he says. “We are not sure if they were destroyed—we think they were taken to be sold. None of them has surfaced so far.”

Alafandi is now part of a three-person team working on an initiative called Aleppo Built Heritage Documentation, a sub-division of the Syrian Heritage Archive Project, led by Berlin’s Museum of Islamic Art and the German Archaeological Institute. An exhibition opening on 28 February at Berlin’s Pergamonmuseum will be a major showcase for the Syrian Heritage Archive Project’s work.

Stefan Weber, the director of the Museum of Islamic Art and a former resident of Damascus, says the project, which began in 2013, was among the first of its kind. Funded by the German foreign office, the Gerda Henkel Foundation and the Andrew W. Mellon Foundation, it has, he says, assembled the largest repository of information on Syrian heritage outside the country—more than 200,000 photographs, as well as archaeological reports, maps, plans, drawings and oral testimonies. The crowdsourced material comes from researchers such as Alafandi and private and public historic archives, as well as Syrian residents and refugees.

Presenting some of these documents, along with films and interactive screens, the exhibition will be “a virtual voyage of discovery” through Syrian heritage, concentrating on the cities of Damascus and Aleppo, Palmyra, Raqqa and the so-called “dead cities”, a group of around 700 abandoned settlements in the north west.

Ultimately, the Syrian Heritage Archive Project seeks to “provide a foundation for rebuilding in the future”, Weber says. “We are not a reconstruction team. We can only provide the documentation. We were lucky that lots of Syrians came to Germany and worked with us.” 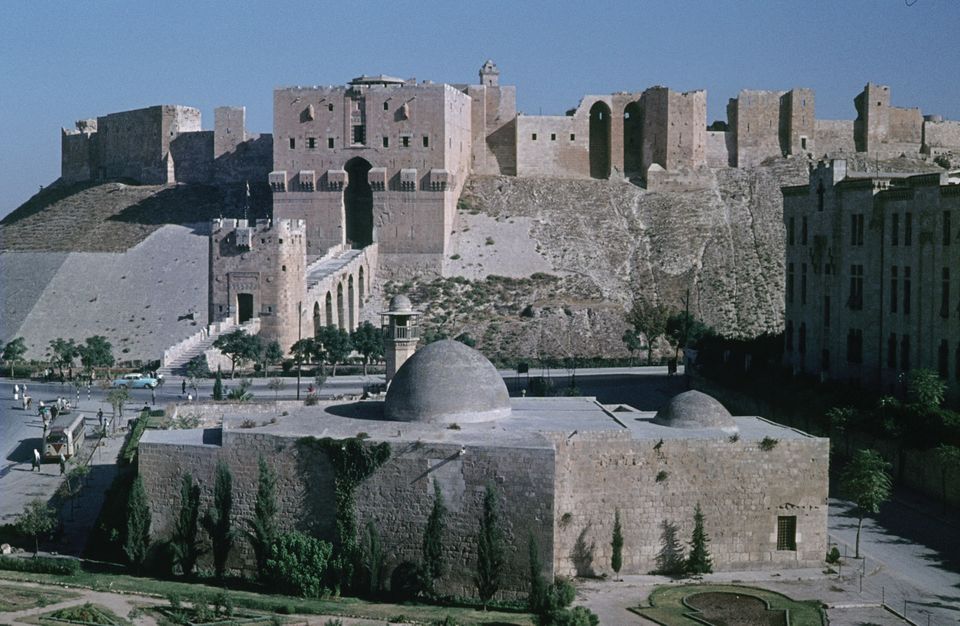 The project has 15 full-time employees, nine of whom are Syrian and two half-Syrian, Weber says. His team has sent data packages on heritage sites to Unesco, including a report on the missing wooden panels at Beit Ghazaleh. This has been passed on to Interpol and the International Council of Museums in the hope that the panels resurface on the art market and can be returned.

Whereas uninhabited ancient sites such as Palmyra can be rebuilt at a later stage with the help of 3D models, Aleppo is a far more urgent reconstruction priority as the population and economic life return, Weber says. A Unesco World Heritage site since 1986, the city has been inhabited continually for more than 5,000 years, and was a hub on many key trade routes from the second millennium BC. In the 16th century, it was the same size as London. Weber views the ancient city as one of the most important sites in the Mediterranean, with its citadel, mosques, madrasas, churches, palaces and souks.

But Aleppo also became the theatre for a four-year battle between the regime of Bashar al-Assad, supported by Russia, and an eclectic array of opponents. Of 170 buildings surveyed by the Syrian Directorate General of Antiquities and Museums in a January 2018 report for Unesco, 9% were completely destroyed and a further 24% were mainly destroyed. “It is not as bad as Berlin was in 1945, but there have been heavy losses,” Weber says. “Neither side showed any regard for heritage. The Russians and Syrians bombed from the air and the rebels attacked from below with tunnel bombs.”

So far, European Union funding for, and involvement in, reconstructing Syrian heritage has been limited to private initiatives because of sanctions against Assad’s regime. But some projects financed by other sources are under way: the Chechen government is funding the rebuilding of the partially damaged Umayyad Mosque, one of Aleppo’s oldest and largest mosques. The Aga Khan Trust for Culture (AKTC), which maintained a limited presence in the city during the war, is helping to restore the Al-Saqatiyya souk.

“The souk is an important part of the infrastructure for economic life as well as part of Aleppo’s heritage,” says Luis Monreal, the general manager of AKTC. “We are working with shop-owners who are committing their own resources to rebuild.”

As a city with hundreds of souks, however, Aleppo will present a reconstruction challenge for decades to come. Weber says that even sorting the thousands of souk photographs the project has received is a laborious process. Not all of them specify the location and most were taken when the shops were open, so “you need to know the place well to identify them”.

With several members of the wider team working on documenting the city in addition to the Aleppo Built Heritage Documentation division, Weber stresses that the project is “not collecting randomly, but choosing material that will be useful as a basis for those involved in reconstruction when the day comes”. While the work is slow, he believes that “we will have come a long way with this three years from now”.

• The Cultural Landscape of Syria: Preservation and Archiving in Times of War, Pergamonmuseum, Berlin, 28 February-26 May