She introduced the artist to the subject of his most famous painting, Christina’s World—and gave it that title 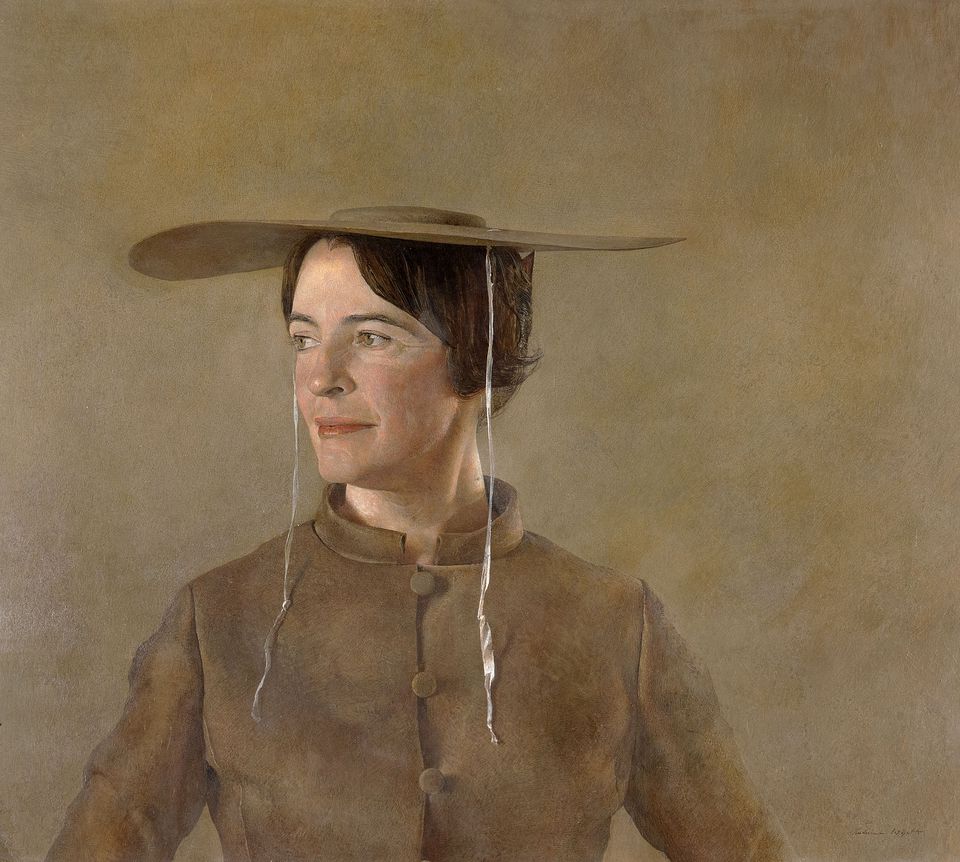 Betsy Wyeth, the fierce guide, collaborator and muse to her husband Andrew Wyeth, has died, aged 98. According to their granddaughter Victoria Wyeth, Betsy died peacefully at her home in Chadds Ford, Pennsylvania. The pair met in 1939 on Andrew’s 22nd birthday, and on their first outing together, the 17-year-old Betsy introduced the artist to a neighbour, Christina Olson and her brother Alvaro Olson. Christina would later be immortalised as the subject of Andrew’s most famous work, the 1948 painting Christina’s World, a portrait which shows her crawling through the field towards her home. It was Betsy who titled the painting—and modelled for the figure’s torso and head.

“She really provided this wonderful nurturing aspect to his work, not just through her titling his paintings and helping to frame them and curating his shows, but she gave him the emotional support that he needed,” Victoria Wyeth says. “She believed in him when no one else did. It's very easy for us to see him as Andrew Wyeth, but when she met him he was just this 22-year-old blond-haired blue-eyed kid named Andy who was doing all these crazy watercolours.”

“Their first date, she took him to where he would eventually paint Christina's World—you don't have to be an Andrew Wyeth fan just to take a step back and see how incredible that is,” Victoria adds. “Of all the places she could have taken him, she decided to introduce him to these people. My grandmother knew Christina and her brother very well. Christina was disabled, so my grandma would go over and comb her hair, and because of this incredible relationship she had with the Olsons, they welcomed Andrew in with open arms.” Andrew proposed within a week of meeting Betsy and the two were married the following year; they remained together until Andrew’s death in 2009. For more than 30 years he would continue to paint the Olson family, their home, and countless objects associated with them. The artist was buried on the Olson property, and Betsy will be buried there beside him.

On another early date, Andrew took Betsy to his studio in Port Clyde, Maine, and proceeded to show off his watercolours. Betsey pointed to a 1936 tempera on the floor, later titled Young Swede, and said that she wanted to see more paintings like that. Wyeth went on to become a master of the medium. “If she hadn't pushed him to do all those temperas,” Victoria says, “he never would have become the artist that he was.”

Betsy was also Andrew’s most dedicated curator, organising his exhibitions and spending countless days compiling his catalogue and interviewing him about his processes. Of their collaborative process, Betsy once told Andrew’s biographer Richard Merryman: “It’s like I’m a director and I had the greatest actor in the world.” All the while, Betsy cared for their sons Nicholas and Jamie Wyeth—Nicholas has gone on to become an art dealer and Jamie an artist. The Wyeth artistic dynasty also includes Andrew’s father, the painter and illustrator N.C. Wyeth, and aunts Carolyn Wyeth and Henriette Wyeth Hurd.

And although the other members of the family might be more recognised in art history books, Betsy remained a force of her own who helped shape the family’s legacy. “She was always smoking—I don't know how she lived till 98. After she died, I put her in a nice outfit and I put a pack of smokes in her pocket. I think the guys in the funeral home thought I was a little screwy,” Victoria says. “She died very peacefully and I was holding her hand—it brings me great comfort to know that she left this world with me squeezing on to her.”