Artist reveled in the corrosion and patination of her towering creations 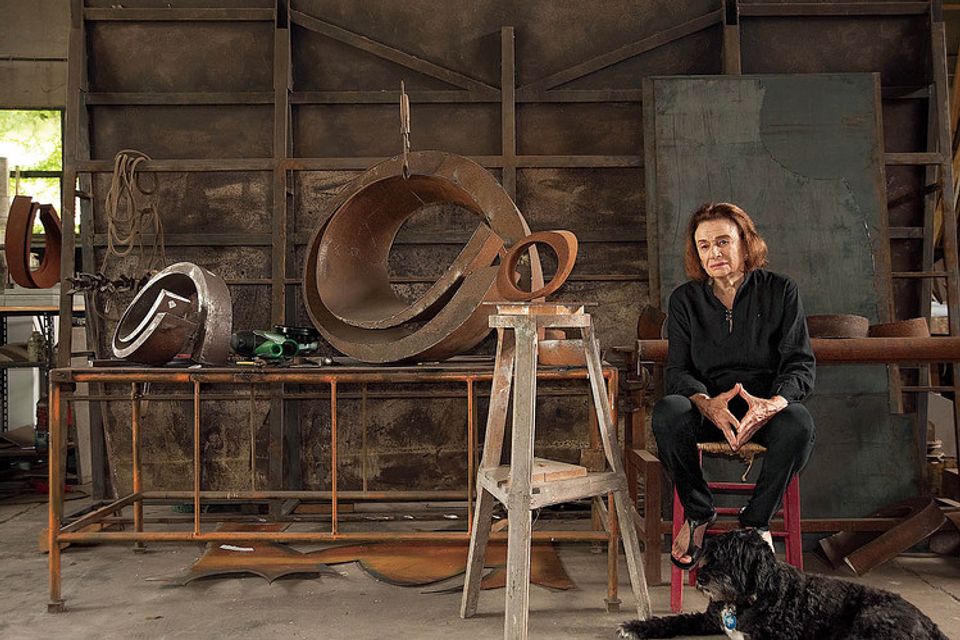 The artist Beverly Pepper has died at her home in Todi, Italy, at 97. Her death was confirmed by her daughter, the Pulitzer Prize-winning poet Jorie Graham.

Pepper, born Beverly Stoll in Brooklyn in 1922, attended New York’s Pratt Institute before moving to Rome in the early 1950s with her husband, the writer Curtis Bill Pepper, and their three-month-old daughter, Jorie. There, they lived in an apartment in the Trastevere neighbourhood before moving north to Monte Mario. “In our first apartment, my mother painted in a space between the kitchen and the living room,” Graham wrote in The Wall Street Journal in 2015. “The rooms smelled of pasta, olive oil, garlic, oranges and oil paint.”

Though she began as a painter, Pepper is best known for large sculptures fashioned from Cor-Ten steel—a metal which acquires a painterly sepia patina over time. While this type of steel is perhaps more commonly associated with Richard Serra, Pepper began using it in 1964, when Serra was still a young video artist. “Everything in the world slowly converts into iron,” she said in an interview with Sculpture while discussing her attraction to the medium. “It is everywhere, even in a teardrop.

“Perhaps an awareness of this final, imperishable destiny plays a role in my feeling for its power and potential,” she continued. “I admire the sheer resistance within iron, its stubbornness, even as it participates in slow processes of corrosion or patination. And it’s always gripping to work in a material that has been such a crucial part of human culture from the literal Iron Age to the great periods of industrial construction and beyond.”

As she moved away from painting and toward sculpture, Pepper began by carving trees that had fallen in her garden in Rome. In 1962 she learned how to weld in an Italian steel plant so that she could assist other artists taking part in a festival that was to be held in Spoleto in which she would also participate. Pepper showed her first steel sculpture at that event, and it remains in Spoleto to this day.

In the 1970s Pepper and her husband moved to Todi, a medieval town in Umbria, where they bought and restored a broken-down 14th-century castle. There she worked in a massive studio that afforded her the space she needed to make her sculptures. Though she eventually began splitting her time between Todi and New York, the Italian town would remain Pepper’s primary home.

The Cor-Ten steel sculptures that she made over the years vary widely. Many curve wildly, looping as if composing cursive, while others stand monolithically, conjuring the work of Brancusi or Pepper’s close friend David Smith; still others relate to their surroundings with an intention that evokes Earthworks by Michael Heizer or Robert Smithson. Due in part to the durability of her material choices, Pepper’s sculptures are on public view throughout the world.

Last year there was a resurgence of interest in Pepper’s work, and at 96 the artist had bi-coastal solo exhibitions at Marlborough Gallery in New York and Kayne Griffin Corcoran in Los Angeles. “My sculptural language has developed and grown for 60 years,” Pepper told artnet News on the occasion of the exhibitions. “Seeing, touching, and the physical sensory engagement is the way into my sculpture; my intention is that the meaning of my work rests in experiencing it.”

Her daughter, referring to her childhood in Italy with her mother, wrote in The Wall Street Journal: “Nothing for me was as important as watching my mother’s hands move as she worked. In those gestures, I was first introduced to the imagination, the realm in which you can make mistakes and discoveries, and be in the service of something else.” In their own ways, mother and daughter would go on, through sculpting and poetry, to push forms in ways that taught others what was possible.

Today, Pepper’s work is in the collections of Metropolitan Museum of Art in New York, the Brooklyn Museum, the Museum of Fine Arts in Boston, the Hirshhorn Museum in Washington, the San Francisco Museum of Modern Art, the Whitney Museum of American Art and many other institutions.