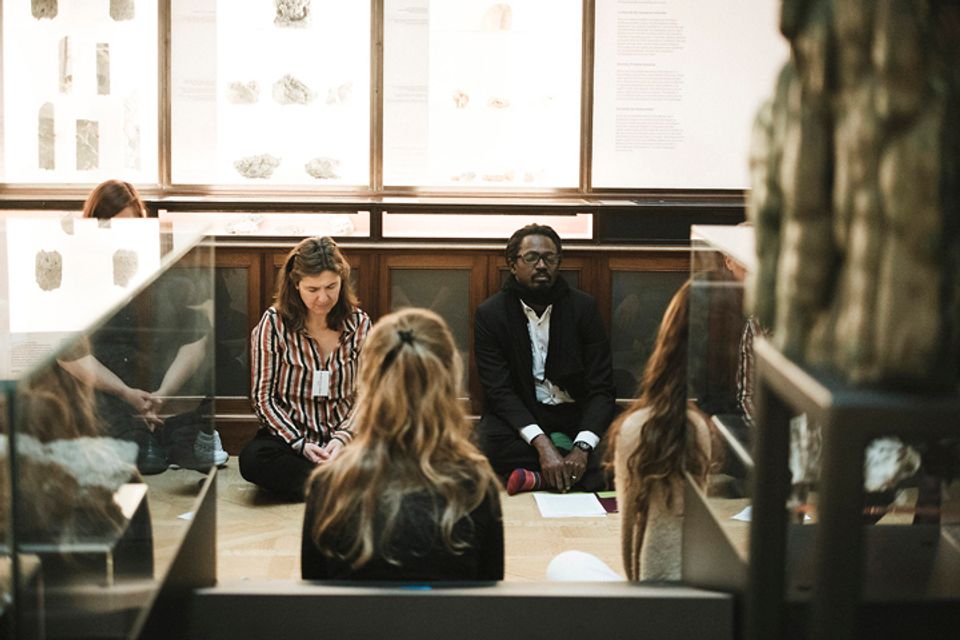 "People are calling for a post-racist society and they are calling for restitution as part of this picture," says Bénédicte Savoy Photo: Grace Ndiritu's Healing the Museum (2019) at the Africa Museum in Brussels. © Caroline Lessire

Bénédicte Savoy, the French art historian who co-authored the Sarr-Savoy report in 2017, which proposed repatriating artefacts plundered from Africa, says the Black Lives Matter movement has sped up restitution efforts in France.

Speaking to The Art Newspaper ahead of an online festival on colonialism in museums on 17 October, Savoy says she has observed a “psychological change in the public” over the past few weeks and months. “Particularly after the racist, violent events we have seen in the US and elsewhere, people are calling for a post-racist society and they are calling for restitution as part of this picture,” she says.

Earlier this month, after years of dragging their heels, the National Assembly of France unanimously voted to return 27 colonial-era artefacts from French museums to Benin and Senegal. It was a strong sign, Savoy believes, of “deep and rapid change in terms of the paradigm shift” in France, where public debates around restitution have lagged behind those in Germany and the Netherlands.

In another “symbol of how things are changing”, just last week, the Congolese activist Emery Mwazulu Diyabanza was fined €1,000 for attempting to seize a funeral pole from the Musée du Quai Branly in Paris—prosecutors had initially sought a €150,000 fine and a ten-year prison sentence. Savoy says: “Diyabanza’s was a provocative gesture, of the kind which already exists in cinema and literature.” However, such calls for repatriation have been uttered—and ignored—before. Speaking during the online festival, organised by the Goethe Institut in collaboration with Turin’s Fondazione Sandretto Re Rebaudengo, Savoy says there is a “collective oblivion” surrounding restitution debates that happened at the end of the 1970s. “Very important political steps were undertaken” to return Africa objects 40 years ago, Savoy says, “yet the initiative failed”.

Comparing such amnesia to today’s debate on climate change, which also existed at the end of the 1970s, Savoy says museums across Europe were the “major force” in opposing restitution 40 years ago.

In Germany, “museum opposition was swift and effective to organise”, Savoy says. An internal paper circulated at the time stated the term “restitution” should be rejected in favour of “transfer”, while it was recommended museums keep “pointing out the legal situation” to combat “moral pressure”. Crucially, inventories were actively discouraged: “Both our ethnological museums and cultural administrations warn against the compilation of such lists. These would only cause all the more covetousness.”

As Savoy points out, such resistance came after huge strides were made by Ekpo Okpo Eyo, a leading archaeologist from Nigeria who was the director of the Federal Nigerian Department of Antiquities, and Senegal-born Amadou Mahtar M’Bow, the former director general of Unesco—the first black African to hold this position. Savoy credits them with turning the restitution debate into “a great worldwide political project”.

Among other things, their efforts led to the publication of a Restitution Form in three languages in 1981. As Savoy says: “This document shows how far this period went, and how close and how simple restitutions of cultural assets to the so-called Third World seemed to be.”

In France, an advisory commission was formed, led by the former Louvre director, Pierre Quoniam. His team’s recommendations included “advancing a return of cultural assets” and viewing such a return as “an act of solidarity as well as fairness”.

Meanwhile, in Germany, the liberal politician Hildegard Hamm-Brücher, gave a public statement in 1982 advising the government to “be generous with restitutions of cultural assets”. The following year, a loan exhibition from Nigeria curated by Eyo, including around 100 objects dating from 500 BC to the 19th century worth nearly $30m, took place on the Museum Island, then in East Berlin.

Savoy paints a different picture with the opening in December of the Humboldt Forum, a vast museum housing ethnographic collections in a reconstructed royal palace in the heart of Berlin. Savoy resigned from the Humboldt Forum’s advisory board in July 2017, over a lack of attention to provenance research, among other complaints. “Personally speaking, I don’t think it’s a good idea, good timing, or the right way to proceed. It is a symbol of German oppression, hegemony and colonialism,” she tells The Art Newspaper.

With the Humboldt opening in phases, the ethnographic collections will not be installed until 2022 at the earliest. Savoy says the question of the building not being ready has given way to “a deeper and broader debate, which keeps it from happening”. She adds: “Locating ethnographic collections in a Prussian castle is a complete mismatch. I am very much opposed to this idea.”

As for the UK, Savoy says Brexit has stymied restitution efforts. There has been more talk, but little action, on the Victoria & Albert (V&A) Museum returning the Maqdala treasures to Ethiopia. The museum’s deputy director Tim Reeve told the Cheltenham Literature Festival earlier this month the V&A was in “animated” talks with the Ethiopian government. A gold crown and a royal wedding dress were among the objects plundered by the British at the end of their expedition to the country—then Abyssinia—in 1868.

Rather than strides being made by the V&A or the British Museum, Savoy thinks movement will come first from smaller regional museums such as the Museum of Archaeology and Anthropology in Cambridge, which has agreed to work towards the display of Benin artefacts in Nigeria. “As happened in the 1970s, civil society is ready to mobilise, but Brexit currently prevails over the whole public debate. Something might happen with Cambridge being a pioneer,” she says.

Crucially, Savoy says the debate must not be consigned to history once more. “I think people cannot ignore it for the second time—its effect will be strong and effective this time,” she says.