Marathon online hi-tech auction was the first of its kind attempted by Sotheby's and totalled $363.2m, boosting confidence that a top-end market still exists A lot was riding on Sotheby’s marquee evening auctions, held entirely online and live-streamed from Hong Kong, London and New York for a gruelling four-and-a-half hours last night. This was the first major public test of the high-end international art market since the Covid-19 pandemic struck.

As fatigued staff finally tallied up the totals, the firm was right to talk about success: overall, the sales racked up an impressive $363.2m (with fees), nudging the upper end of the presale target range of $262.1m to $368.4m (calculated without fees). Lot after lot scored well, including Royal Fireworks, a blazing orange-hued canvas from 1975 by Helen Frankenthaler from the 18-lot Ginny Williams collection, which opened the evening. It rocketed over expectations of $2m-$3m to make $7.9m (with fees), more than doubling the previous high for the artist.

Everything about the sale was innovative. The first major evening sale to be held entirely online, it featured auctioneer Oliver Barker alone in a curved booth, filmed in London, fielding bids from banks of screens in front of him. Those screens showed the specialists in the three cities, spaced out in tiered stands and signalling their bids to Barker; online bidders were also active. 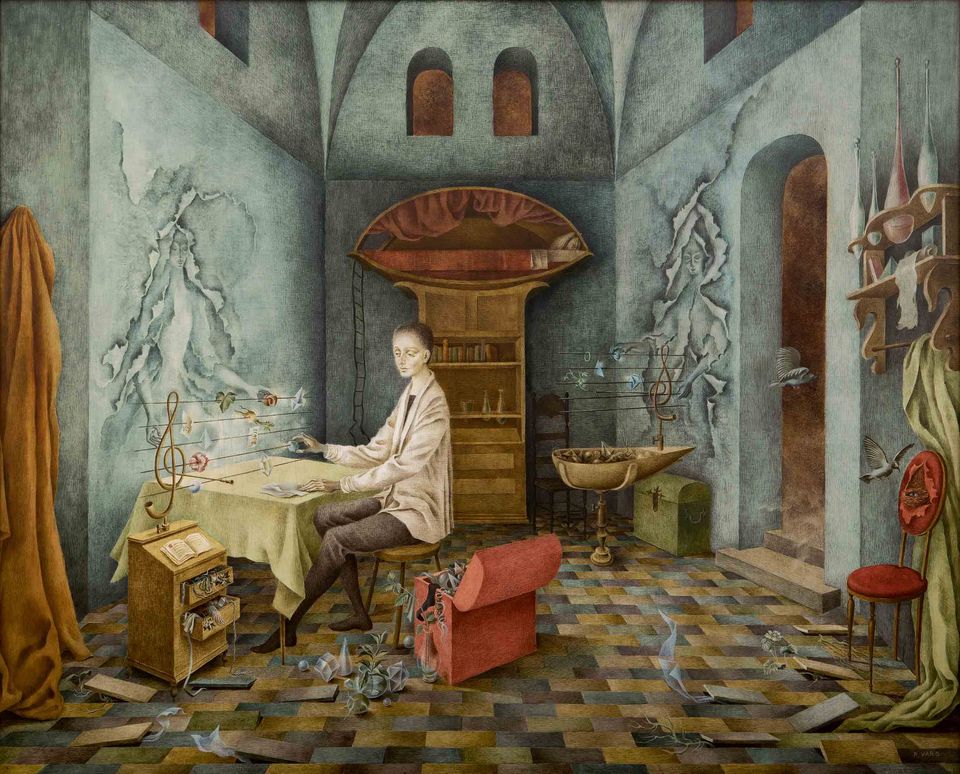 The three sales, held consecutively, comprised the 100%-guaranteed Ginny Williams material (nine lots were also given last-minute irrevocable bids), followed by 30 lots of contemporary art and ending with 28 Impressionist and Modern works of art. Overall 93.2% by lot was sold, and the sale twice broke the record for a work of art offered online: Joan Mitchell’s Garden Party (1961-62) made $7.9m and Jean-Michel Basquiat’s Untitled (1982), racked up $15.2m. (Pre-sale estimates do not include fees; totals do.)

In the contemporary art section, the strangest moment was the battle for the evening’s headline lot, Francis Bacon’s Triptych Inspired by the Oresteia of Aeschylus (1981), a major work being sold by the Norwegian Hans Rasmus Astrup. After $60m, an online bidder from China appeared, adding increments of just $100,000 and slowing the auction to an agonising snail’s pace in the process. It took 10 minutes for the work to be hammered down for $74m ($84.55m with fees, within the pre-sale estimate of $60m-$80m), with Sotheby’s Grégoire Billault finally prevailing. According to the industry newsletter Baer Faxt, the work was not fresh to the market, having been offered around for several years, initially at $120m.

It was a good evening for women artists, with new price highs set for Vija Celmins, Leonor Fini, Helen Frankenthaler and Alice Rahon, and for works from the Hunk and Mary Anderson collection. Ten abstracts accumulated by the businessman made $66.3m including a rare Clyfford Still, PH-144 (1947-Y-No.1) (1947), which made $28.7m.

Jean-Michel Basquiat’s vibrant blue Untitled (Head) portrait on paper scored an over-estimate $15.2m with fees, while Roy Lichtenstein’s White Brushstroke 1 (1965) made $25.4m, towards the low end of expectations of $20m-$30m. And one of the evening’s surprises was the strong result for Matthew Wong, the Canadian self-taught painter whose Realm of Appearances (2018) opened the contemporary segment. It sailed past its estimate of $60,000-$80,000 to make $1.82m. Wong died by suicide last year and his work is highly sought after.

The final section of Impressionist and Modern works was weaker, but made a within-target $62.8m and saw Picasso’s Tête de femme endormie (Head of a Sleeping Woman, 1934) make $11.2m (est. $9m-$12m). Fortunately, 10 of the 11 works of Surrealist and Modern art from Latin America, dubbed The Vanguard Spirit, boosted the total, making $26.6m and setting five new auction records in the category.

The sale was closely watched and sent an encouraging signal on several levels. Firstly, it showed that online-only sales can do well, and Barker must be commended for bringing energy and vigour to what could have been a long, dreary evening. It proved that the Covid-19 pandemic has not killed the demand for art and that there are still determined bidders out there. And the level of guarantees was confidence-boosting, even if some had been agreed before the crisis.

Nevertheless, the total of $363.2m is a far cry from the sales just a year ago, when a single sale, Sotheby’s contemporary art evening session on 16 May in New York, made almost the same amount, $341.8m. So fireworks, yes, but within the “new normal” of a pandemic-hit art market.