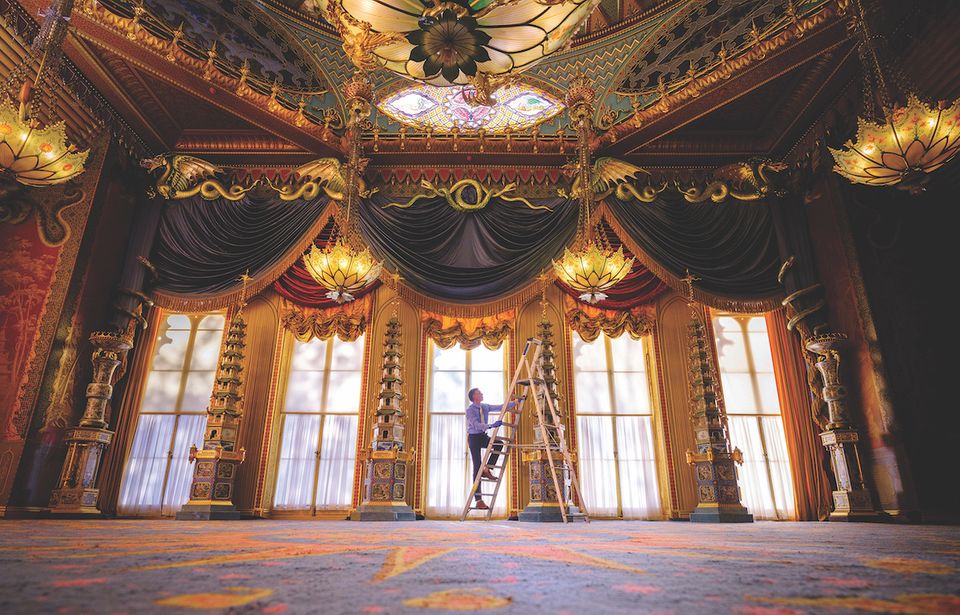 In the winter of 1847-48, night prowlers in Brighton could have witnessed a series of curious processions lumbering away from the onion domes and spires of the town’s extraordinary fantasy palace, the Brighton Pavilion. On the orders of Queen Victoria, her uncle’s furniture, chandeliers, paintings, fireplaces, door surrounds and even the kitchen tiles were stripped room by room and sent on 145 carriers’ carts to London.

In the autumn of 2019, descendants of those prowlers could have witnessed an equally curious procession in reverse: this time under heavy security, with photography banned and the pavilion closed for a week—at a loss of £70,000 in admission revenue—glittering treasures amassed by George IV returned on long-term loan from Buckingham Palace.

More was definitely more for this most spectacular royal collector, celebrated this winter in exhibitions at the Queen’s Gallery in London and the National Horseracing Museum in Newmarket. Yet most dramatic is the return of extraordinary objects to the Brighton rooms for which George bought or created them: since most of them disappeared into private apartments in Buckingham Palace and Windsor Castle, they had never been seen in public. More will return in early 2020 after conservation work undertaken by Buckingham Palace specially for the loans, and others will follow after the London exhibition closes in May.

Many were already startling objects before George decided they needed a little something extra. The Kylin clock was confected in France from a 17th-century Chinese bowl whose bottom was chopped off to incorporate the clock face, flanked by a pair of blue 18th-century lions topped by a Japanese Buddha, all mounted in a flurry of gilt bronze on a base inlaid with porcelain panels cut from an antique box. The king felt this was still a bit on the plain side, so he added a second marble and bronze plinth and a cockade of swirling branches and sunflowers. The effect, as with many of his commissions, is somewhere on the narrow border between stunning and hilarious. David Beevers, keeper of the Royal Pavilion for the past 40 years, calls it “an opium dream on the south coast”.

The loans will last for at least two years, while the Queen has the builders in for urgently needed work on the East Wing of Buckingham Palace.

Beevers is surprisingly charitable towards Queen Victoria, although in 1850 the New Monthly Magazine commented that the destruction could not have been worse “if a host of Californian gold-seekers had been turned loose into the pavilion”. She did save the contents, he points out, when the expectation was demolition, with the land sold off for a new building project until Brighton council took the brave decision to buy it for £53,000.

Victoria herself returned some pieces, including stupendous chandeliers that she simply could not find space for, and a trickle of further objects came back from George V, Queen Mary and in the 1950s from the present Queen. However the new loans, encompassing more than 120 objects, dwarf the scale and importance of previous returns.

The town commissioners realised they had acquired only the shell of the magnificent but ramshackle building, and its upkeep has been a nightmare for generations of Beevers’s predecessors. Funding is always a problem, and when several members of his outstanding conservation team retired, including a full-time gilder, they were not replaced. A trust structure for all of Brighton’s museums is now proposed, though some have suggested that the pavilion could fit well into the expanding portfolio of Historic Royal Palaces.

The wilder George’s treasures, the more Beevers loves them, like the towering porcelain pagodas back in the Music Room, made even taller with Spode bases, and sprinkled with hundreds of gilt bells, dolphins, dogs and dragon finials. The pagodas originally cost around £100 each and George’s embellishments added more than £2,000.

“This is probably the largest and best set of Chinese porcelain pagodas in the world,” Beevers says. “Their return to the room for which they were created makes this one of the greatest rooms in all of Europe.”