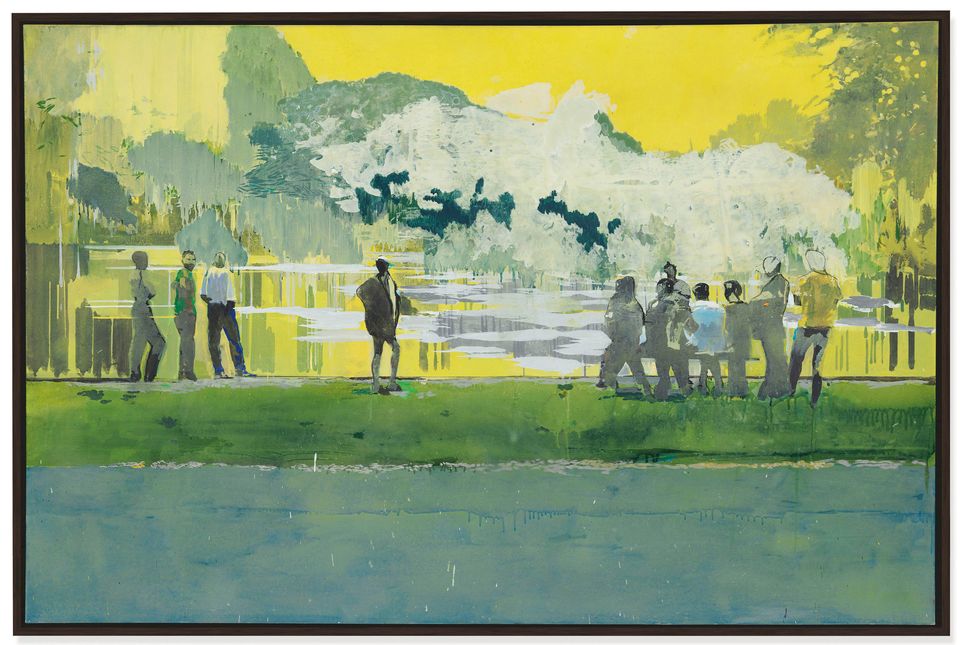 Ball Watching IV by Hurvin Anderson, sold for £1.6m (£1.9m with fees) © Christie's and courtesy of the artist

The air felt thin at the top at last night’s Christie’s evening sale of post-war and contemporary art (4 October).

With two lots withdrawn (including George Baselitz’s series of eleven feet paintings which had been estimated at £6m-£10m) the estimate was revised to £87.8m to £126.7 but, at £71.1m (£84.6m with fees), the sale failed to reach this largely because two high profile lots—both without guarantees—went unsold.

Gerhard Richter’s skull painting fell flat, a lone bidder failing to bring it up to its £12m to £18m estimate, and Jeff Koons’s Cracked Egg (Blue), a characteristically shiny eyeful, also went unsold with a £10m to £15m estimate. Interestingly, Koons’s dealer Larry Gagosian was bidding in the room, but seemingly did not think it worth going over £8.5m.

Both works felt overpriced and the US-based art advisor Lisa Schiff says: “I find the whole Koons market down right now, so I don’t know why a collector would consign a work which such a high estimate right now.” A Christie’s spokeswoman said after the sale: “The results were not what we were hoping for but we stand by the works—the quality of which is unquestionable but we may review estimates based on demand for certain works next season.”

A painting by the American painter Mark Grotjahn, Untitled (Yellow and Green Low Fall Face 41.80) estimated at £6m to £8m, also went unsold. “Grotjahn’s is a complicated market, and it’s interesting to see it playing out at auction—his work has been at an inaccessible price point on the primary market for a while and it’s hard to find these works,” Schiff says. “Mark was a victim of mass speculation from very early on, in 2006-08, so he took control of his own market to stop that happening—he really controls who is able to buy his work and his prices.” Schiff says she has already contacted Christie’s “to see if there is a good post-sale opportunity” but it seems not. 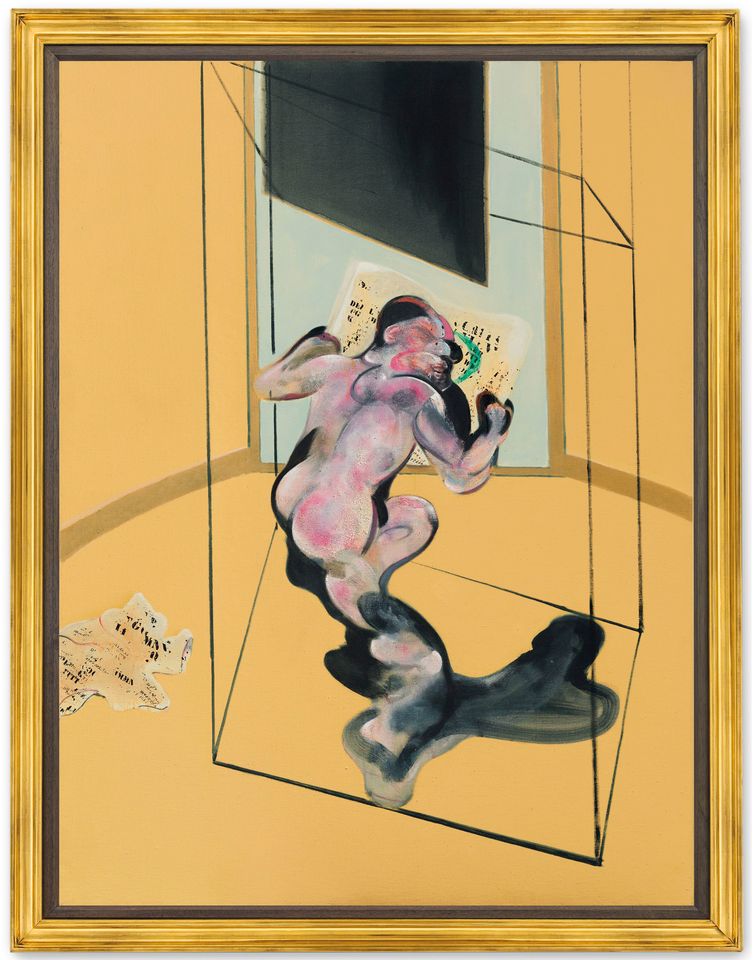 Despite these, the total was still the second highest total for a Frieze week evening sale in London, just behind Christie’s October 2017 auction which made £99.5m (with fees).

Bidding cannot gain momentum on works that are already priced to the hilt and, if energy felt flat at first, the room came alive where estimates left room to run. Take two lovely paintings by the 2017 Turner prize nominee Hurvin Anderson, a UK artist of Jamaican heritage. Country Club (guaranteed by a third party) sold on the phone to a US buyer for £1.7m (£2m with fees) above a £1m to £1.5m estimate. Then, priced at a mere £350,000 to £550,000, the smaller, sunny Ball Watching IV nearly matched this—it sold to a woman bidding in the room for £1.6m (£1.9m with fees). These are the second and third highest prices for Anderson’s work at auction.

Overall it was a good night for British artists, who prompted some enthusiastic bidding from a big Frieze week crowd, and afterwards Katharine Arnold, the head of sale, declared that: “British art reigned supreme this evening.”

The contingent was led by 12 works by Francis Bacon and Lucian Freud, two of them from the collection of the Monaco-based collector, Magnus Konow. Chief among these was Bacon’s Figure in Movement (1972, est £15m-£20m), in which Bacon’s grief at the death of his lover George Dyer, who died in 1971, manifests itself in a lighter palette. Konow, a friend of Bacon’s, had owned the painting since he bought it from Marlborough Gallery in the 1970s and that freshness proved attractive. Guaranteed by a third party, it was the top lot of the sale and, underbid by the dealer Per Skarstedt, it sold for £17.5m (£19.9m with fees) to Christie’s Francis Outred’s phone bidder.

The rest of the Bacon and Freud selection was more arcane. The Bacons were very early pieces, from when he dabbled as an interior designer, and alongside the paintings were rugs and, most desirable, his earliest surviving work—a painted screen made around 1930, its trifold form a precursor to the triptychs that Bacon became so fond of. Against competitive bidding, it was bought by a man in the room for £2m (£2.4m), double the estimate.

The London-based dealer Nick Maclean, of Ekyn Maclean, bought an early Lucian Freud painting, Man in a Striped Shirt (1942) which was bought by Konow from from Marlborough Gallery in 1978, on its low estimate of £1m (£1.2m). Maclean underbid another early Freud, Still Life with Zimmerlinde, which sold above estimate to Arnold’s phone bidder at £750,000 (£908,750) 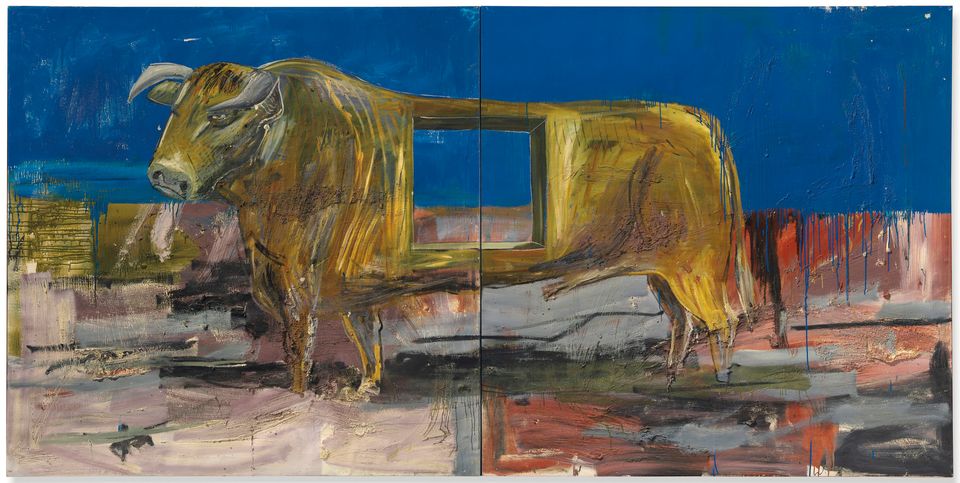 A new chapter for Oehlen?

The German artist Albert Oehlen was also in demand. Lot two was Oehlen’s huge Stier mit loch (Bull with hole), which had been on long term loan to the Neues Museum Weimar from 1993 to 2005. Carrying a third party guarantee, it sold to Oehlen’s European dealer Max Hetzler for a record £3m (£3.6m with fees), more than double the high estimate. Later, Oehlen’s abstract Untitled (1989), went for £2.6m (£3.1m with fees), underbid by Andrew Fabricant, Gagosian’s new power hire. After the sale, Arnold proclaimed this “a new chapter for the artist: not only did have the world record, but we also saw a world record for an abstract painting from the late 1980s.” Schiff observes that “For so long the auction houses have not understood Oehlen’s market and would have put abstracts like this in the day sale. But this time they got it right.” 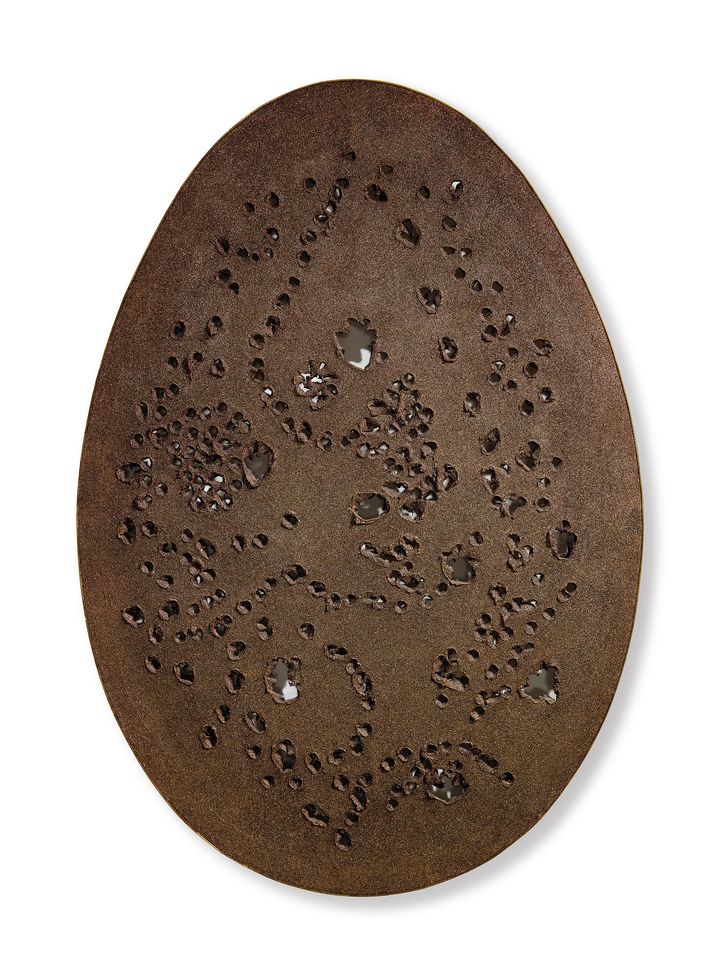 Immediately following the main sale was Thinking Italian, which Christie's has stuck by this year while Sotheby’s has ditched its stand-alone Italian auction in favour of rolling all the Burris, Fontanas and Manzonis into its main evening sale. The divide at Christie’s seemed nominal—while one Concetto spaziale by Lucio Fontana was offered in the main post-war and contemporary art sale (but went unsold with a £1.2m-£1.8m estimate), the following lot, Piero Manzoni’s was moved at the last minute into the Italian sale where it sold on its low estimate at £3m (£3.6m with fees).

Overall the Italian sale made £34.2m (£39.5m with fees) from 37 lots (82% sold by lot), with a new record for Maria Lai, a rare female artist in the male-dominated realm of Italian post-war art, at £120,000 (£150,000 with fees). But top of the sale (and second highest price of the evening) was Lucio Fontana’s imposing yet fragile Concetto Spaziale, La Fine di Dio, which sold on its £15m (£16.2m with fees) low estimate to just one bidder on the phone—likely the last minute third party guarantor, announced just before the sale.