Echoing a conflict in the US, the nation contends with calls to remove controversial memorials 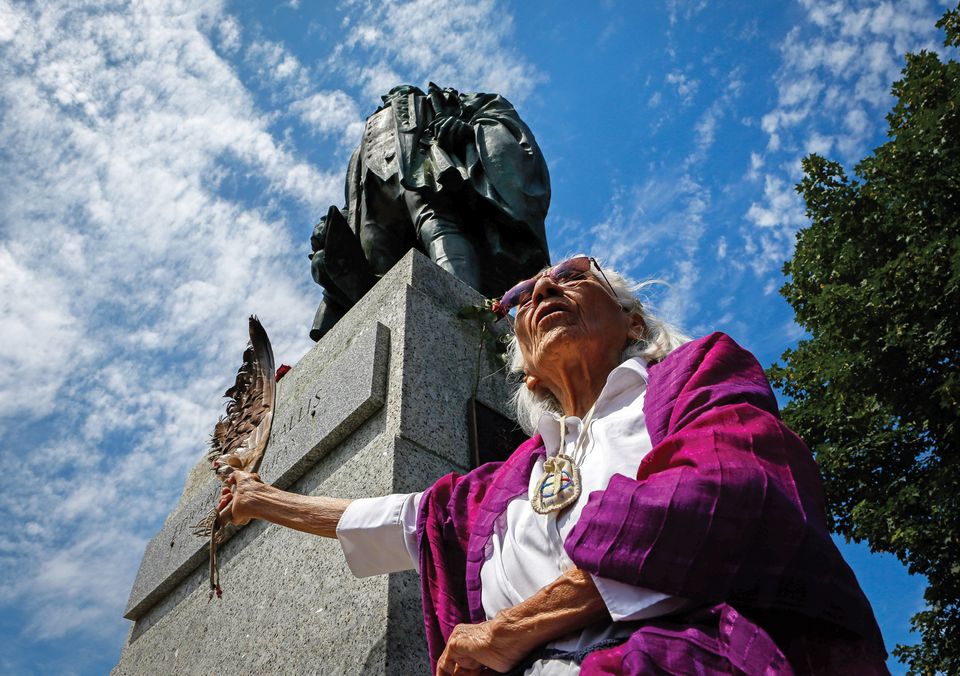 Isabelle Knockwood, an elder of the Mi’kmaq Nation, at the statue of Edward Cornwallis, who put a bounty on the heads of members of the indigenous group REUTERS/Chris Donovan

What should be done with monuments to figures historically tied to racism? The question persists not just in the US, where a year has passed since the violent rally in Charlottesville, Virginia, in which white supremacists sought to prevent the planned removal of a statue of the Confederate general Robert E. Lee. In Canada, a similar battle has broken out over the removal of memorials that protesters argue glorify colonialism and the erasure of the nation’s indigenous heritage.

One of Canada’s most controversial figures is also the country’s most historically celebrated: John A. Macdonald (1815-91), who was central in uniting the northern colonies as one nation and became its first prime minister. But Macdonald was also responsible for a series of laws aimed at forcing First Nations groups to assimilate into white society, regularly referring to them as “savages”. In Montreal, a statue of Macdonald was vandalised with red paint on 17 August, shortly after another was removed in Victoria.

The anonymous activists who took responsibility for defacing the statue left behind pamphlets that said Macdonald “directly contributed to the genocide of indigenous peoples with the creation of the brutal residential schools system”, in which children were forcibly sent to boarding schools where they faced poor living conditions and physical abuse. “Macdonald statues should be removed from public spaces and instead placed in archives or museums, where they belong as historical artefacts,” the vandals wrote. “Public space should celebrate collective struggles for justice and liberation, not white supremacy and genocide.”

Meanwhile, in Halifax, a special advisory committee was formed in July to address how Edward Cornwallis, the British general who established a settlement there, is commemorated. In 1749, as the colonial governor of Nova Scotia, Cornwallis issued a bounty of ten guineas for every prisoner or scalp taken from the Mi’kmaq people. The ten-person committee, which includes five Mi’kmaw representatives, was formed months after a bronze statue of Cornwallis, which stood in the port city for 85 years and had become a flashpoint for protesters, was temporarily placed in storage. The committee is due to hold meetings this autumn, when it will determine what should be done with the statue and consider how the city can honour First Nations people.

A similar working group is being established in Orillia, Ontario, where the reinstallation of a memorial to the early 17th-century explorer Samuel de Champlain has been put on hold after complaints about its representation of indigenous people. The monument, which has stood in Couchiching Beach Park since 1925 and was taken down last year for restoration, shows Champlain “flanked on each side by loincloth-garbed First Nations men, sitting at his feet and bowing in subservient positions to these European newcomers”, says the Anishinaabe artist Aylan Couchie. It also included a plaque stating that the statue was “erected to commemorate the advent in Ontario of the white race”. Couchie says she fears that the statue will eventually be returned to public view, and the city’s mayor has suggested creating new interpretative elements or art installations as part of the renovation.

“A monument, even a problematic one, is telling us something about the past, however unpleasant,” says the heritage consultant Robert Bevan, who has written a report on the politics of monuments that is due to be presented at a conference in London in October.

Bevan says he supports the idea of erecting counter-monuments to “challenge the original’s meaning and power”. Counter-monuments can “reframe or readjust the existing monument and turn sites of honour into sites of shame if done on an adequate scale”, he says. “Simply changing the wording on a plaque attached to a massive equestrian rider isn’t going to undermine its power sufficiently and justify its continued presence if that monument’s intention was to be oppressive.”

Recontextualising problematic monuments in situ fosters some “useful debates around whether there are more complex, subtle, artistic and powerful means of comment and subversion of honour than simply adding these monuments to a museum collection”, Bevan says. “Someone suggested surrounding one of the Charlottesville statues with a giant hedge, which is a great idea.” However, Bevan poses that some monuments “are simply too egregious to be allowed to stay in situ, at least in an unaltered state; I would place statues of those who led intentional genocides in this category”.

Couchie says that although many museums and institutions in Canada “are moving in a direction where indigenous art, culture and people are appropriately and respectfully represented, we still have a long way to go, and moving an object to a museum doesn’t guarantee that its context will be adequately represented”. She adds that counter-monuments, even in the form of performance, “can provide unique opportunities to engage with history through a contemporary lens”.

To unpack objectively what makes a monument problematic, Bevan says that it is important to understand the intent behind its construction and the social climate of the era. Pointing to Confederate monuments in the US, he notes that “these statues were not erected in the years immediately after the war, but in the early 20th century, to serve as markers of power and discrimination in the face of growing demands for equality from black Americans”.

“The fact that statues of John Macdonald were still being raised in the 1960s is a disgrace,” Bevan says. Since the statue of Cornwallis in Halifax dates from 1931, it can be seen as another example of a monument raised after the event “to control and repress”, he adds. “No statue is neutral but some are deliberate liars.”