Historic object or contemporary carving? Canadian artist claims a totem that washed up on a Victoria beach is actually his work 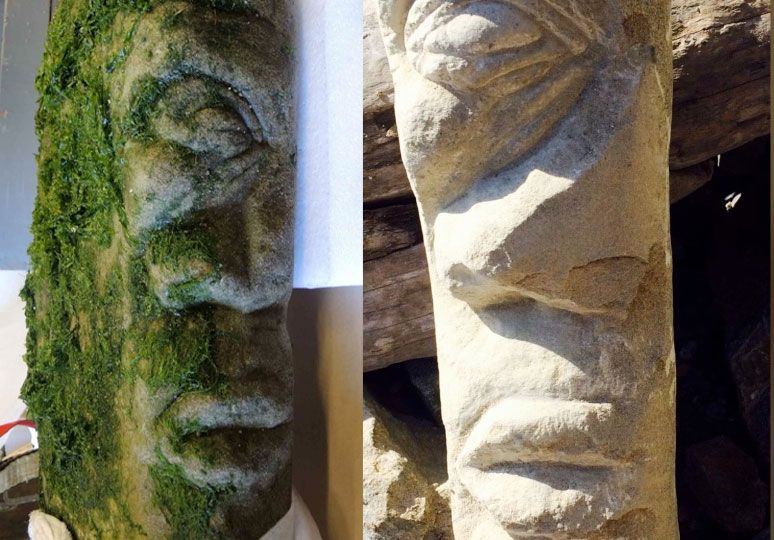 Artist Ray Boudreau says he is "100% positive" that an object, left, which recently washed up on a Canadian beach, is a sandstone carving he was working on in 2017 that disappeared overnight Photos: Royal BC Museum, Grant Keddie and Ray Boudreau

A Canadian artist says that a totemic stone pillar discovered on the beach in Victoria, British Columbia, which archaeologists of the Royal British Columbia Museum thought was a ritual Lekwungen object, is actually a work-in-progress of his made just a few years ago, which went missing and might have been swept into the ocean.

Last week, the museum announced that research based on consultations with Indigenous leaders and writings by the anthropologist Franz Boas confirmed their hunch that the 100kg sandstone pillar was a significant artefact of the Lekwungen culture. The object was discovered last summer by a local resident at Beacon Hill Park, who tipped off Grant Keddie, the museum’s curator of archeology.

Keddie speculated that the stone was once installed on the edge of a cliff before it was toppled by a landslide, and added that the object did not appear to have been carved with steel tools. In a since-deleted article on the museum’s website, Keddie also backed the thesis by noting a passage in fieldwork Boas wrote in 1886, in which he refers to a ceremonial stone pillar in Finlayson Point, an area of the park where the object was discovered.

“Radio-carbon dating can only be done on organic artifacts, making it difficult to date carved stones like this one,” the curator wrote in a blog post about its recovery and conservation. “We can, at least, suggest that this was a very special ritual stone pillar. It was likely one of those related to ceremonies such as the first salmon ceremony, used in puberty rites or related to ceremonies involving the feeding of the dead.”

However, in an interview with CTV News, an artist from Victoria named Ray Boudreau says he is “100% positive” that the object is not an Lekwungen artefact but rather a carving he made in 2017 from a sandstone slab using a hammer and chisel. Boudreau shared photographs of his process with the news channel, time-stamped to 23 January 2017, which show a sculpture that is virtually identical to the object recently found—if its features were softened by wear and the thick layers of algae covering it were removed. Boudreau's work disappeared overnight, leading him to originally think it had been stolen. Instead it might have just been washed out with the tide.

When he saw the work has resurfaced and was identified as an Indigenous object, he at first was unsure whether he should come forward, because of the interest it had raised in cultural preservation, according to the local news station. “Do you think I should even say anything?” he told CTV. “I only had it for three days and then it grew legs.”

When it first announced the discovery, the museum stated that it would collaborate with tribal leaders of the Songhee and Esquimalt nations to determine where the object would be displayed. In a statement to The Art Newspaper, the museum says it is now “working with the Songhees and Esquimalt Nations to set up a meeting” with Boudreau, and that once the meeting has been scheduled it will “have a better idea of how long it will take to determine the stone pillar’s origins”.