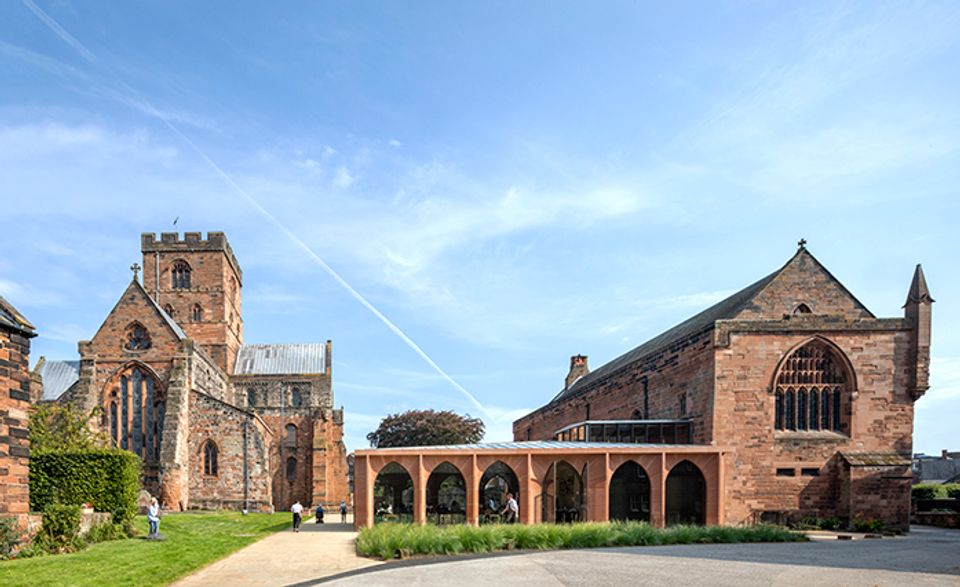 Access to a medieval building situated in the precinct of Carlisle Cathedral in the northwest of England has been restored after 15 years of arguments, complex planning permissions and perilous engineering.

The Grade I listed Fratry, built in the late 15th century and originally linked by cloisters to the 12th-century cathedral, was marooned when Henry VIII demolished a third of the cathedral itself and many precinct buildings. The stone was then carted away to reinforce nearby Carlisle castle. Since then, the building has been used as a library (it still holds a valuable collection of 17th century books), a cafe in the 20th century, a store room and mostly just empty space.

But now the Fratry is once again accessible from the main cathedral. This has been achieved through a £3.5m project by the architects Feilden Fowles—half-financed by the Lottery Heritage Fund—which has built a neighbouring sandstone cafe with a small glass and bronze link to stairs up to the Fratry hall and down to the undercroft, both also accessed by a glass lift. 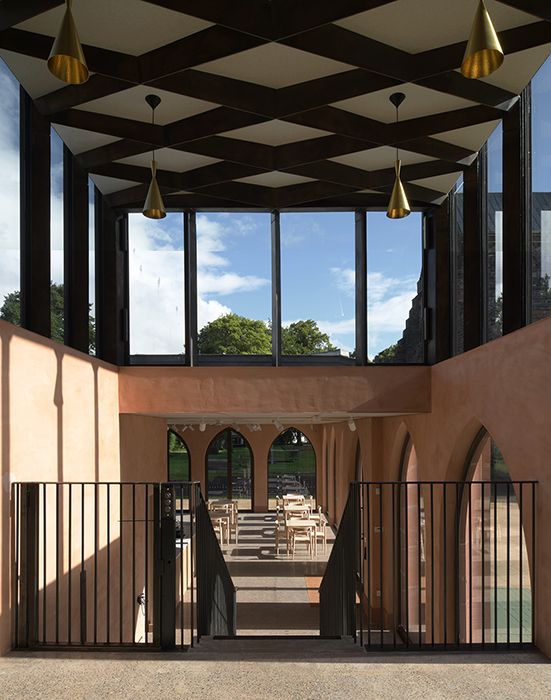 Interior view of the cafe

The cafe is flooded with light from glazed arches of solid masonry cut by a local firm. Their shape is inspired by the massive west window of the Fratry itself. The arches are self-supporting, but tied into the light steel frame of the building.

“Very few people in Carlisle have ever walked through that door into this building,” Mark Boyling, the dean of the cathedral, says. “This project sounded simple, but it was anything but. It kept going back on the 'too difficult to deal with' shelf. This is a transformative space.”

The challenges of the site included not just state-protected ancient monuments and Grade I buildings, but a water-filled Roman culvert running under the entire site, countless interventions over the centuries when windows and doors were added or blocked up and two 19th-century attempts to resolve the problem, both by renowned architects and part of the Grade I listing. Sir Robert Smirke carried out extensive work in around 1810, including a new arched doorway, which 70 years later G E Street reversed and lowered when he added an awkward new porch. Both architects left the undercroft accessed only by a narrow stair at the opposite end of the building.

Feilden Fowles originally proposed a conventional precast concrete flat roofed pavilion serving as an education centre and a revamped cafe in the undercroft. “When we really looked at the site, this suddenly seemed mad,” Fergus Feilden said, “it was obvious the cafe should have the views.” The Fratry itself will be the education and events space—whenever both can resume.

The trickiest engineering was demolishing the Street porch and dismantling the arched door, restoring its height and flipping it back to Smirke’s original orientation, and filling the gaps with new stonework – while supporting and monitoring movement in that entire side wall of the building. It was, according to Peter Laidler of the engineering partners Structure Workshop, “terrifying all the way”.

The cafe opened when the cathedral reopened in July and people poured in immediately, with the completely new view of the cathedral prompting an increase in visitor numbers.

Lay Canon Bryan Gray remembers the old undercroft cafe with no affection whatsoever: “it was a miserable space with all the charm and atmosphere of Debenhams circa 1970. "This", he adds, “is one of the most glorious spaces in Cumbria if not the entire country”.