March auction will return to the Emirate in spring 2021, but is cancelled this year due to new strategy and constrained supply of works 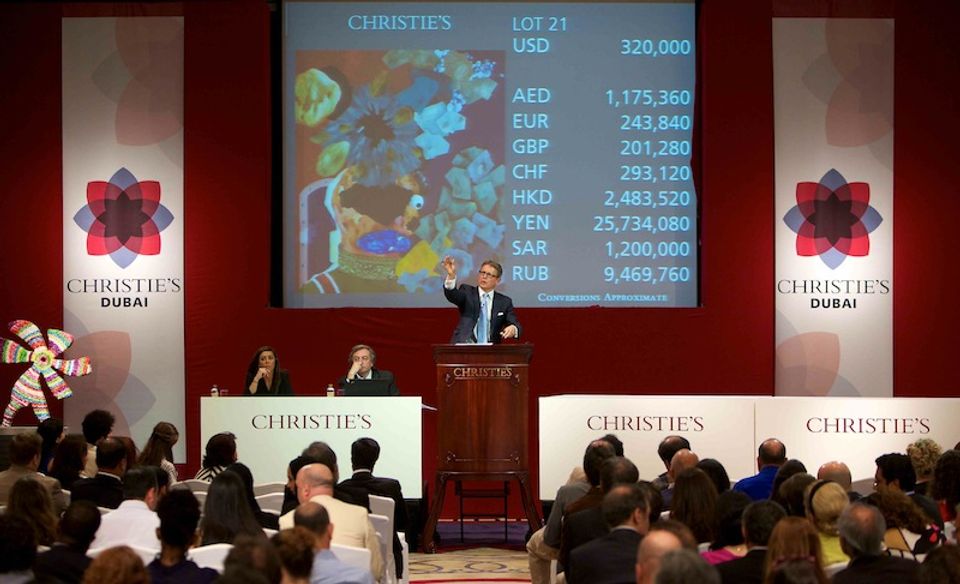 Christie’s has cancelled its annual Middle Eastern art sale in Dubai this year, citing a “new auction format” for 2021, alongside a squeezed supply of works and a "more focused" market. The sale was due to take place in March.

The firm, which has been holding auctions in the Emirate for 15 years, will now hold one Dubai sale during 2020—of watches on 11 April—with a preview of art highlights from the London sales in March to coincide with Art Dubai. It will also hold charity auctions in Abu Dhabi and in Saudi Arabia at the end of this month.

Michael Jeha, Christie’s Middle East chairman, says the company “will be focusing on one major art sale in 2020 to take place in London [in October]”.

Christie’s previously held biannual sales seasons in Dubai, but in 2017 moved the autumn edition of the Modern and Contemporary Middle Eastern art to London, in order to “internationalise” the market.

However, Christie’s plans to hold both a watches sale and an auction of Modern and contemporary Middle Eastern art in Spring 2021 (the exact date is dependent on both the international auction calendar and on when Ramadan falls, Jeha says).

“We were already having conversations about the Dubai art sales, from a curatorial and content perspective, increasing the contemporary component of the sale,” Jeha says. “By the time we agreed the strategy, it was too late to hold an April auction of Middle Eastern art in Dubai.”

On whether a lack of supply and regional instability influenced the decision, Jeha says: “I think that explains why we took the decision that holding one sale a year [of Middle Eastern Modern and contemporary art] in London was the best way forward, at the moment, to meet the needs of collectors and the wider market. But that can easily change.”

He adds “there are supply constraints for top quality works” but attributes this to the fact that many “key works” have been sold—by Christie’s and others—into museum collections. “The supply of top quality Modern Middle Eastern works is thinning and the market has matured, with demand more selective,” Jeha says. “In the early days, you had many collectors coming into the market and buying lots of different artists. Now 15 years later, they are a lot more focused on a few artists. So that also had an impact.”

The move comes against a backdrop of an economic slowdown in Dubai and a banking crisis in Lebanon—traditionally a strong buying base for Middle Eastern art and a market focus of auction houses in the past couple of years—leading to restrictions on money being taken out of the country. The UAE’s art market has also been impacted by Western tensions with—and sanctions upon—Iran, where money cannot be transferred out of the country from Iranian bank accounts; the blockade of Qatar; and regional instability.

The Dubai-based dealer Charlie Pocock of Meem Gallery thinks supply has been “dredged” by too many auctions. “I have highlighted over the past two years to the head of departments at all three auction houses (Christie’s, Sotheby’s and Bonhams) that with six sales a year [between them] of 100 lots each, there will be no work left to offer clients.”

Meanwhile, Sotheby’s (which has an office in Dubai but holds its Middle Eastern art sales in London) will move its 20th Century Art: Middle East sale—traditionally held in April with the other Middle Eastern art sales—to 24 March to coincide with its Modern & Contemporary African Art sale (25 March), both in London. The move is intended to “shake things up a bit" and "explore the synergies between the categories—both of which are young, fresh markets” a spokeswoman says. She adds: “Dubai is one of our strongest markets and we are also looking a lot to Saudi as an emerging market.”