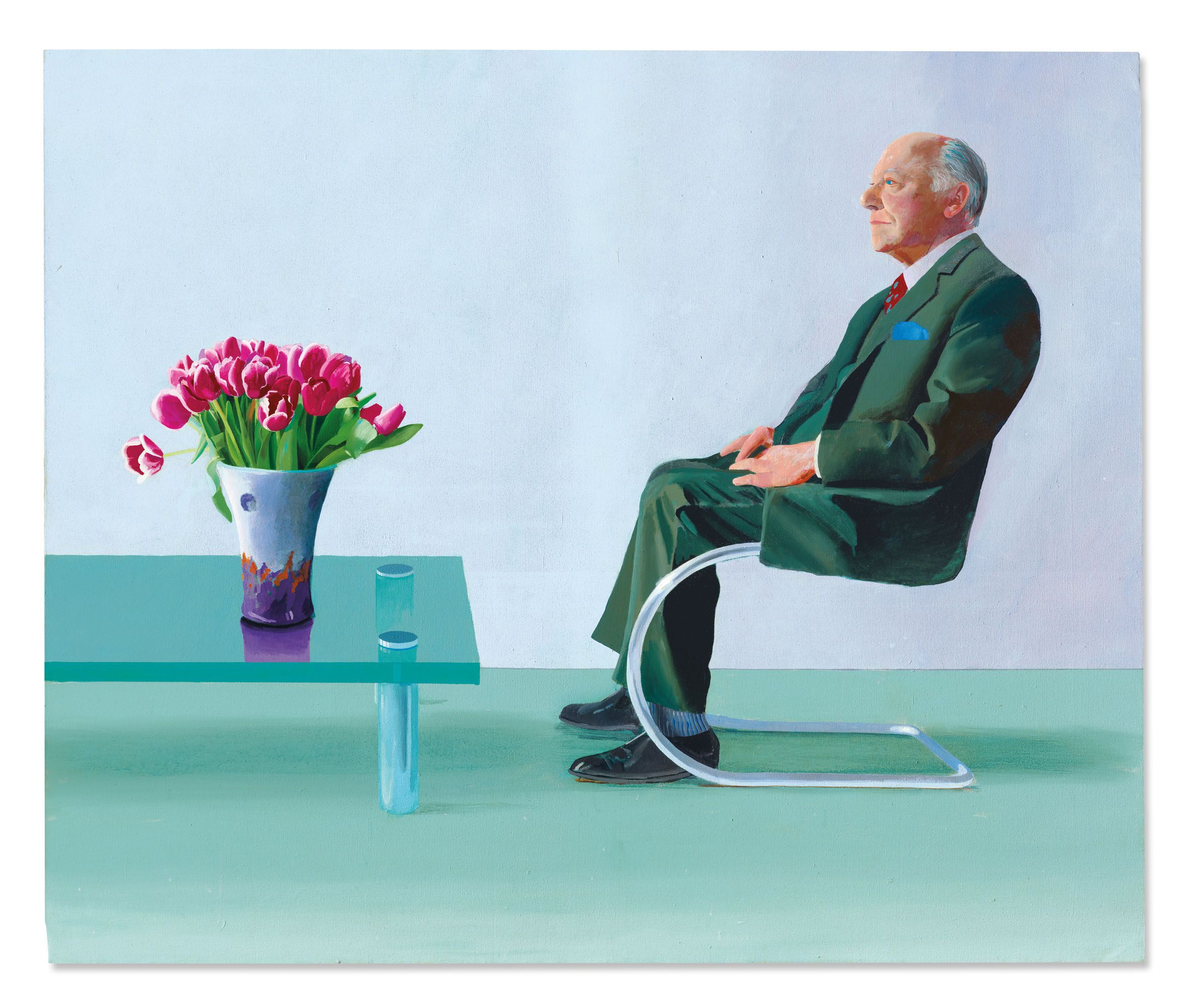 “The vocabulary of auctioneering and the art market has changed fundamentally,” said Christie’s auctioneer Jussi Pylkkänen following Christie’s “20th Century: London to Paris” sales series tonight, which achieved £90.2m (with fees) across four sales. Around 60% of the evening's bidders were European, with the rest evenly split between the US and Asia.

With the major Frieze and Fiac art fairs cancelled this month in Paris and London, tonight was, says Giovanna Bertazzoni, co-chairman of Christie’s Impressionist & Modern art department, about creating “that energy between Paris and London.”

Speaking of energy, Pylkkänen and his Paris co-auctioneer, Cécile Verdier, head of Christie’s France, had something of the somewhat forced chemistry of TV breakfast news anchors as they jointly conducted the sales. But they had their work cut out for them with the more ambitiously estimated lots. As Ben Clark, the deputy chief executive of the advisors Gurr Johns International, says: “Results are definitely showing the market is very price sensitive. Pushed estimates simply don’t work in this environment even for good works.”

The highest value portion of the evening was the London-based Post-War and Contemporary art evening auction—witnessed by eight bidders in the room—which made £41.2m (£49.2m with fees) against an estimate of £40.8m to £55.9m.

With the pandemic-induced remoteness and lack of a sense of occasion, marketing is, according to Clark, becoming all important with these increasingly sophisticated live-streamed evening sales. “Psychologically in these economic climes, why bid big unless you’re a true connoisseur with no liquidity issues," he says. "With no bidding, it’s like a silent movie.”

But marketing and the market are very different—perhaps divergent—things, with the slick smoke and mirrors of the former saying very little about the mysterious latter, which is only becoming more opaque with distance.

In the art trade, there is sometimes no better marketing than a recent exhibition. Radical Figures: Painting in the New Millennium only closed at London’s Whitechapel Gallery on 30 August. Yet a painting by the German artist Daniel Richter that was included in that show—Tarifa (2001) which was bought from Victoria Miro in the year it was painted—was stuck in at lucky lot number one at Christie’s tonight. It sold for £950,000 (£1.1m with fees), well over its £600,000 to £800,000 estimate.

"With no bidding, it’s like a silent movie.” Ben Clark, Gurr Johns International

“His works are very difficult to get hold of and very in demand—he’s hot to trot right now,” says Clark of Richter’s work. The painting was covered by a third-party guarantee.

Much of the evening moved much slower, however, with a handful of lively bursts where bidders saw some value. Such as with the Danish artist Per Kirkeby’s Die Zeit Nagt III (The Time Gnaws III), which had seven bidders and sold to a Paris buyer for £260,000—double the estimate of £100,000-£150,000.

The most high-profile lot of the night was undoubtedly David Hockney’s Portrait of Sir David Webster (1971), a painting of the former general administrator of the Royal Opera House (ROH) that was commissioned and paid for from donations from the ROH’s staff upon Webster’s retirement. The work sold on the lower end of its estimate of £11m (£12.8m with fees), presumably to its third-party guarantor.

The work has been contained within a Plexiglass box at the ROH ever since but the embattled organisation decided to sell it to raise funds at a time when the coronavirus pandemic has shut performing arts venues for months. "As we face the biggest crisis in our history, the sale of David Hockney’s wonderful portrait of Sir David Webster, is a vital part of our strategy for recovery,” says Alex Beard, the chief executive of the Royal Opera House.

Katharine Arnold, Christie’s co-head of Post-War and contemporary art Europe, says ROH’s decision to sell “had not been easy” and that “sensitive” discussions with Christie’s began in the summer. But, Arnold says, “the key mission of the Royal Opera House is to support the performing arts,” rather than being a museum for the visual arts.

With much debate around the deaccessioning of works from cash-strapped museums at the moment, Arnold says the ROH’s decision was made easier as the work is wholly owned by the institution, not by the public, and “the beauty of auction in a way is the transparency of the market and the fact it gives visibility to a beautiful painting”. The fact that the work was guaranteed by a third party from the start also lent confidence to the ROH, Arnold says.

Interestingly, David Ross, the founder of Carphone Warehouse, became the new chair of the ROH’s board of trustees in July and was reportedly involved in the decision to sell the Hockney portrait to raise funds. He is also the chair of London’s National Portrait Gallery—and a keen collector of Hockney’s work. Might he have bought it? 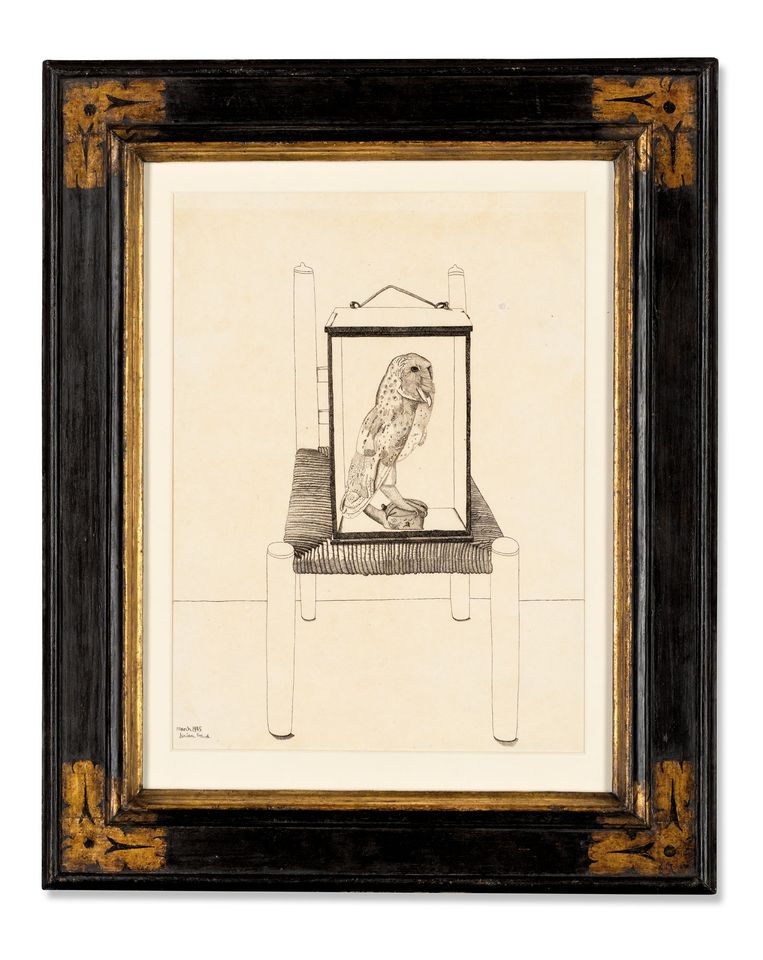 A beautiful early ink drawing of a taxidermy owl in a case by Lucian Freud, Untitled (Interior Drawing, The Owl, 1945), will be familiar to anyone who saw the now-shuttered Blain Southern show of early drawings by Freud in 2012. That show took place in what is now the art and antiques dealer Danny Katz’s gallery on Hill Street in Mayfair and it was Katz who was selling the work at Christie’s tonight—he had bought it in 2011 at Sothebys for £517,250 (with fees). It sold on the lower end of a £800,000 to £1.2m estimate (or £982,500 with fees), thanks to entirely London-based phone bidding.

Elsewhere, the much-touted mixed reality work by Marina Abramovic, titled The Life (2018-2019), fell a little flat. This was the first mixed reality work ever to be offered for sale by Christie’s and the buyer will get two headsets, a certificate of authenticity and instructions for how to use it. Put on a headset and Abramovic appears as a hologram in your living room (or wherever you happen to be in), and performs a 19-minute performance piece in front of you—a meditation on mortality.

“People are starting to understand what virtual reality and mixed reality actually are and how they differ—we’ve had a lot of interest from the public,” says Katharine Arnold before the sale. “We first started talks about including the work about a year and a half ago, but now with the pandemic and social distancing, it seems more relevant.” Buyers for such works, however, generally remain "people who have more of an institutional set-up or inclination—who know how to display such a work".

Perhaps this still-limited buyer-base showed in the result—confidently estimated at £400,000 to £800,000, the reserve was seemingly lowered before the sale as it sold at just £230,000 (£287,500 with fees) to Arnold’s phone bidder against little competition. 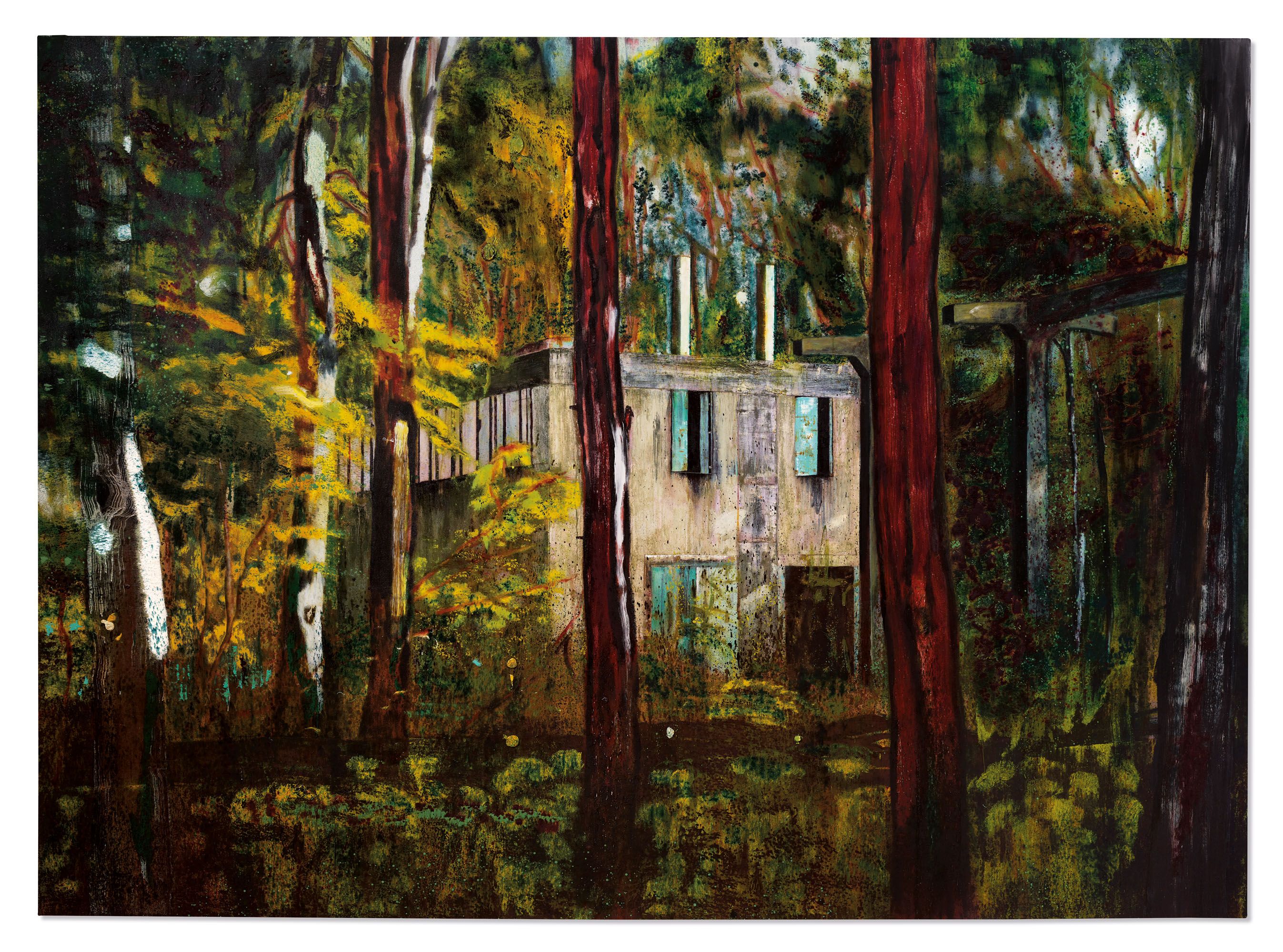 Overall, the top lot of the sale was Peter Doig’s Boiler House, a rather chilling scene of an abandoned building in the woods from 1993, which sold for £11.9m (£13.8m with fees, est. £12m-£18m) again to Arnold’s phone. The market for Doig’s 1990s work, before his stylistic shift around 2002 when he and his family moved to Trinidad, is strong, Arnold says: “He’s really understanding how to make paint malleable. Although this work belongs to Doig’s Le Corbusier-inspired Concrete Cabin series, it’s closer to Swamped [the 1990 painting of a canoe which sold at Christie’s for $25.9m in 2015] in technique and composition.”

The evening’s four sales only included a handful of works by female artists (Abramovic and a few in the collection of Paul Haim by Niki de Saint Phalle and Françoise Lacampagne) and in the post-sale press conference Christie’s chief executive Guillaume Cerutti said although the auction house had “made progress” in including more works by women in its evening sales, “there was still a lot to do.” He did take pains to point out the number of female Christie's staff leading the sales this evening.

When asked if that was a challenge to veteran auctioneer Pylkkänen, Cerutti said: “Jussi is not a man nor a woman, he’s an icon.” On that bombshell, until next week's sales in New York.