Expanded 20th-century art week in US will swallow up London auctions; Sotheby's has yet to make a decision about its New York spring sales 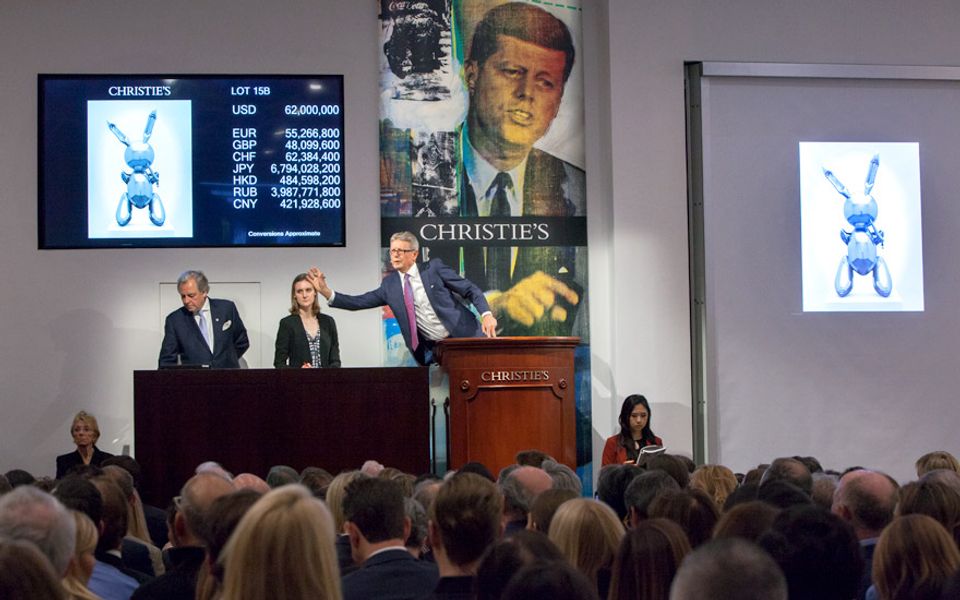 Last year during the New York “giga-week” sales, Christie's sold Jeff Koons’s Rabbit (1986) for $91m, the highest price ever paid at auction for a work by a living artist Courtesy of Christie’s

Due to coronavirus (Covid-19), Christie's and Phillips will scrap their multi-million dollar Impressionist, Modern and contemporary art sales series in New York, due to run in mid-May, in favour of a “consolidated” week of 20th-century sales at the end of June.

The new series of New York sales, during the week beginning 22 June, will absorb the 20th-century and contemporary London auctions normally held at the end of June. However, London's usual Classic week—including Old Master paintings and the Exceptional Sale—is expected to run as usual from 6 to 10 July, with New York's equivalent Classic Week (usually held in early May) postponed to 3 to 10 June.

Meanwhile, Sotheby's is yet to make a decisions about whether to run with its New York May sales. “As previously announced, we plan to make final decisions about each auction event at least 30 days prior to the existing sale date, and will alert all relevant parties at that time,” a spokeswoman says.

“Clients are more cautious about consigning,” says Christie’s chief executive Guillaume Cerutti, though he stresses that “[buyer] demand is still strong”, citing a rise in private sale enquiries from buyers in the past two weeks. Jussi Pylkkänen, Christie’s global president, says its European consignors “like the idea of selling in New York in June” adding that the company has received “no push-back” from clients. “So far we've had nothing but full understanding," Pylkkänen says. “The plan is to effectively have a Spring Break.”

At Christie’s Geneva, the Luxury Week (including jewellery, watches and wine) has also been postponed to 29 June to 1 July due to the virus.

Meanwhile, as Hong Kong is seemingly emerging from the other side of the outbreak, Christie’s is hopeful that its Spring Asian Art and Luxury sales will run as currently scheduled from 30 May to 3 June. Phillips also plans to hold its spring season in Hong Kong as originally planned from 31 May to 2 June. It has yet to reveal the exact dates for its early June sales in London.

Christie’s Hong Kong office has now returned to normal business hours, while its Beijing and Shanghai premises “are operating with reduced staff on-site and remote working arrangements where necessary”, the company says in a statement. Its Seoul and Tokyo offices are open with reduced hours and staff, while the Bangkok and Jakarta offices will be open to clients by appointment only.

Last week, Christie’s announced the closure of its premises across the US, Middle East and Europe, and the London King Street headquarters, which has been operating on a skeleton staff this week, will close until further notice from this evening due to the spreading virus. All London employees will be working remotely by tomorrow, although Christie’s global head of human resources Andrew McEachern says that so far the auction house is not aware of any confirmed cases of Covid-19 among its staff worldwide.