Christo, who wrapped the Reichstag and installed The Gates in Central Park, has died, aged 84

With his late wife and partner Jeanne-Claude, the artist created monumental interventions on architecture and landscape 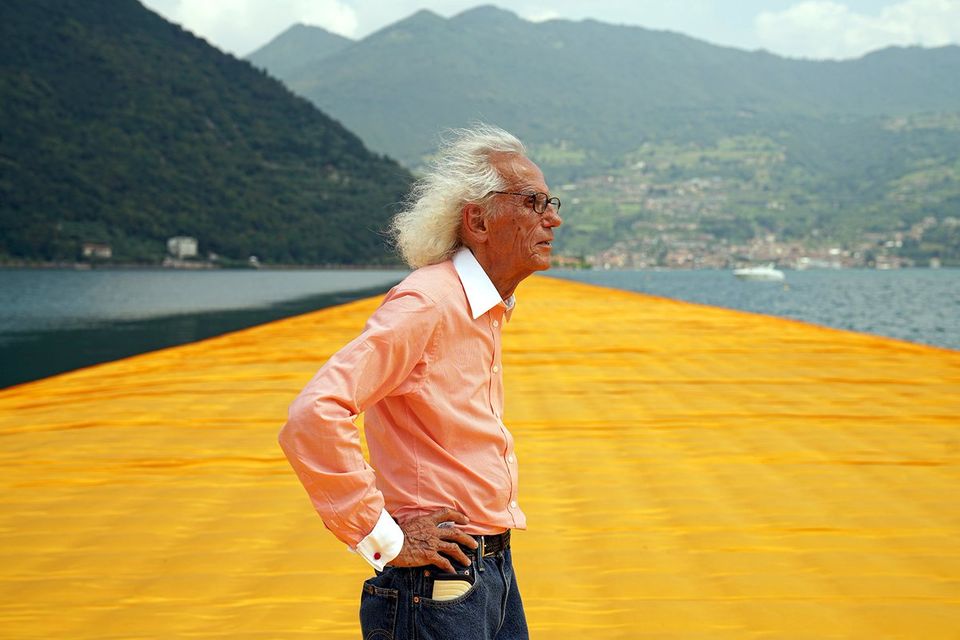 The artist Christo, who with his late wife and partner Jeanne-Claude was known for his monumental, often whimsical interventions on architecture and landscape, has died, aged 84. The artist’s studio confirmed on Twitter that he died at his home in New York today, and that his next major project to wrap L'Arc de Triomphe is Paris, which had been delayed by a year due to the coronavirus, was still on track to take place in September 2021.

Christo Vladimirov Javacheff was born in Bulgaria on 13 June 1935—the same day Jeanne-Claude Denat de Guillebon was born in Morocco. Christo studied at the Sofia Academy from 1953 to 1956 and then briefly at the Vienna Academy of Fine Arts, before moving to Paris in 1958, where he painted portraits to earn money. He met Jeanne-Claude when he was commissioned to paint her mother’s portrait. The two collaborated on their first project together, covering barrels at the port of Cologne, in 1960. Two years later, they created their first intervention in Paris, Rideau de Fer (Iron Curtain), blocking off the Rue Visconti near the River Seine with oil barrels as a statement against the Berlin Wall.

Their projects became more and more ambitious and Christo and Jeanne-Claude became known for wrapping public buildings and landmarks, such as the Pont Neuf in Paris in 1985 and the Reichstag in Berlin in 1995. “Like classical sculpture, all our wrapped projects are not solid buildings; they are moving with the wind, they are breathing,” Christo told us in an interview. “The fabric is very sensual and inviting; it’s like a skin.” The couple’s installations over the years have taken many forms, including punctuating New York’s Central Park with more than 7,500 fabric draped gates, simultaneously erecting thousands of umbrellas through two valleys in Japan and California, floating pink polypropylene around 11 islands in Florida’s Key Biscayne, and creating a buoyant yellow walkway for the public across Lake Iseo in Italy.

Jeanne-Claude died from a brain aneurysm in 2009, but even after her death the artists’ works have been attributed to both of them. The couple is survived by their son, Cyril Christo, a photographer, film-maker and animal rights activist.

More recently, Christo returned to the oil drums from earlier in his career, creating a rectangular shaped “mastaba” that drifted on the Serpentine lake in London in 2018. “I love the barrel as an object; it is something very common for transporting goods, starting from little cans to the big barrels,” Christo told us in an interview at the time. “They are industrial, they can have different colours, different varieties, and are extremely simple, very magical and very difficult to explain. It is a very extraordinary sculptural form.”

The pair was known to fund their projects entirely themselves, through the sale of preparatory drawings, plans and fundraising. “I like to be absolutely free, to be totally irrational with no justification for what I like to do,” Christo told us. “I will not give up one centimetre of my freedom for anything.” In 2017, the artist cancelled an ambitious project in the US to cover 42 miles of the Arkansas River with silver fabric—after spending 20 years planning and $15m of funding—because he had no interest in finishing the project under the Trump administration. “They own the land,” Christo told The New York Times. “I can’t do a project that benefits this landlord.”

• Listen to a 2018 interview with Christo about his grand project for the Serpentine on our podcast.