The latest virtual fair, OVR:2020, limits 100 galleries to showing six works each, all produced this year—we pick our highlights 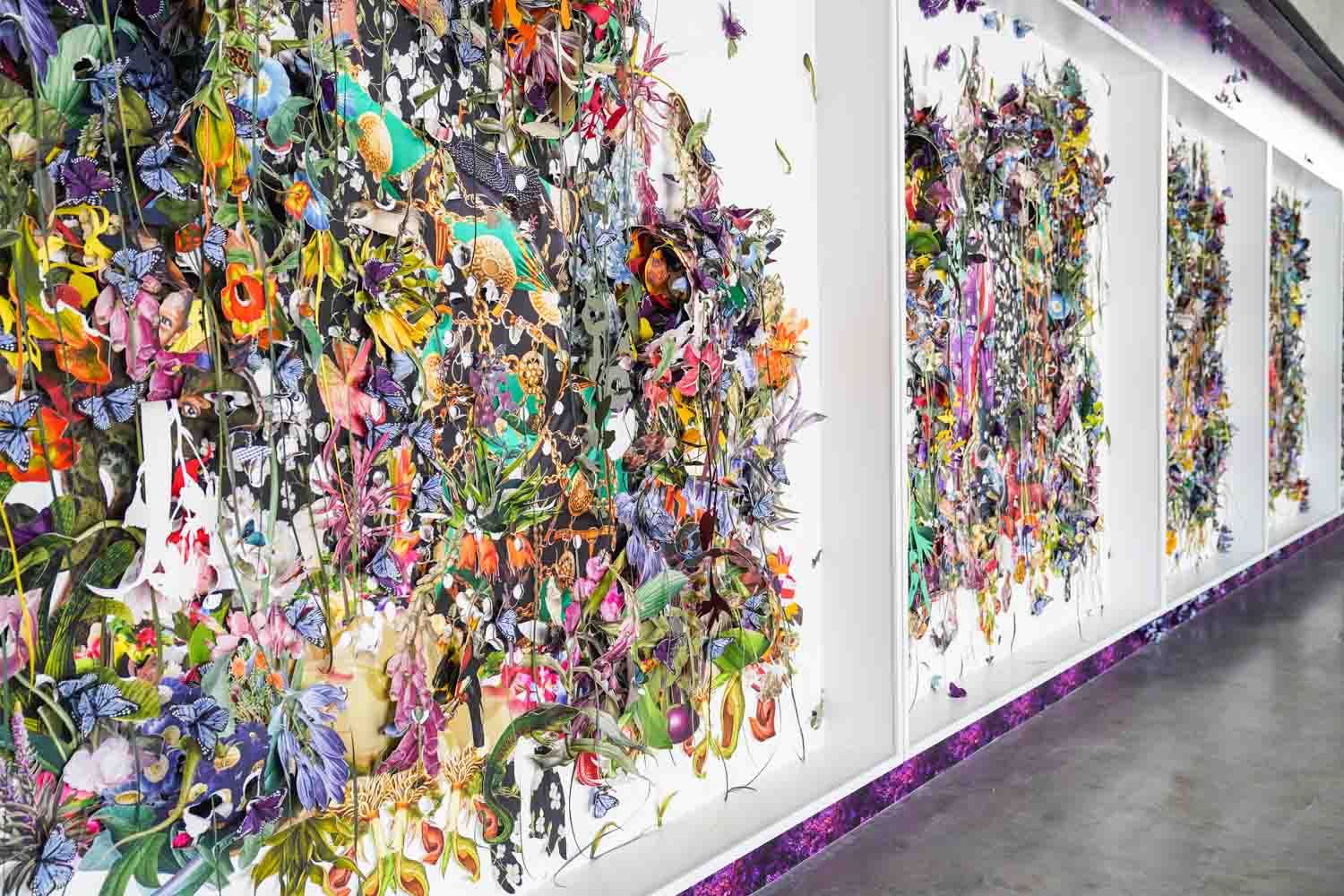 Ebony G. Patterson's ...and the dew cracks the earth, in five acts of lamentation...between the cuts...beneath the leaves...below the soil.... (2020) Courtesy of the artist and Monique Meloche Gallery

Another day, another online viewing room. This time, Art Basel’s third virtual fair of the year, OVR:2020, which opens today until 26 September as a replacement for the Swiss fair that was postponed in June and then cancelled altogether due to Covid-19.

Fair organisers have fast learnt that the art is in the edit with online viewing rooms—less is more in the era of digital bombardment. With that in mind, for this version Art Basel has restricted all of the 100 galleries to showing only six works at a time, and all must have been made in 2020.

This year has been a steep virtual learning curve for Art Basel as it seeks to replace all three of its fairs with an online iteration. “We started off trying to recreate the real life fair, with 250 to 280 odd galleries,” says Marc Spiegler, Art Basel’s global director. But that is too sprawling and, frankly, dull online.

“It's more like a cross-pollination between a pop-up store, an auction and a streetwear drop.” Marc Spiegler, Art Basel’s global director

So the idea with this version is “to check whether something that is tighter in its focus is right for the market right now,” Spiegler says, adding: “It’s also a lot shorter—three and a half days—so it’s less like an attempt to replicate the dynamics of a fair online and more like a cross-pollination between a pop-up store, an auction and a streetwear drop.”

This is the first time Art Basel has asked exhibitors to pay for doing an OVR, but there has been no resistance from galleries, Spiegler says: “No-one has said we’re not doing this because it costs $5,000. You don’t need to sell much art to justify that small an amount. If the costs were the same as the big Art Basel booths, which would be tens of thousands or even hundreds of thousands, then I think people would really question it. But we deliberately priced it in a way that we thought was fair for an initial attempt with this sort of thing.” He adds: “People are adults about this, I don’t think any galleries would expect us to perpetually do things for free and sling our entire VIP programme and marketing into action permanently for free.”

One new function to make the OVR experience more immediate is a live chat feature, so viewers can quickly inquire about a work and, Spiegler says, “as long as someone at the gallery is awake, they will respond right away.” He credits Alex Logsdail of Lisson Gallery with the line that “there needs to be more of a conversation and less of a correspondence” when it comes to virtual fairs.

Many galleries have chosen to dedicate their OVR to a single artist and The Art Newspaper team has chosen five solo "booth" highlights.

In March, the Jamaica-born artist Ebony G. Patterson's Chicago studio was shut down due to Covid-19. But that did not stop her working and when Monique Meloche visited Patterson’s ad-hoc studio in May she “was surprised by a new series of ‘smaller’ mixed-media works on paper taking over her apartment. I snapped pictures and asked how soon I could get the framer to pick them up (which had to wait since he too was shut down) and now two of these works are being included in a group show at the Museum of Contemporary Art, Chicago opening this November.” The others are being seen on OVR:2020 for the first time. Patterson’s elaborate mixed-media gardens, although at first glance things of delicate beauty, address issues such as race, class, and social and political injustice, themes that have seemed more pressing than ever in the past few months. Prices range from $25,000 to $500,000. A.B. For more than three decades, the US artist Marilyn Minter has delved into what she calls the “pathology of glamour” with her seductive, candy-coloured photographs of bits of women’s bodies that hover between objectification and agency. In her latest suite of photographs, on show at Salon 94, Minter has jacked up her colour palette to reflect “the intensity of the moment”, according to the gallery’s founder Jeanne Greenberg Rohatyn. But—as titles including Penumbra, Static and Overcast suggest—a gloominess hangs over the works, a reference perhaps to our extended state of lockdown. Prices range from $10,000 to $25,000. A.S.

If it is art world interaction you have been craving, Neugerriemschneider’s presentation of a new two-part installation by the Argentina-born Thai artist Rirkrit Tiravanija provides just that. For the first element, the artist returns to the aphorism that recurs throughout his work: “Tomorrow is the question”—a phrase that feels more relevant than ever. Live streamed to the public, the text will be printed in nine languages across t-shirts which will then be piled on top of a polished box. The second element requires viewers to respond to the question: “If tomorrow is the question, what is the question?” Answers will be handwritten on the surface of a large-scale painting created from canvas-mounted newspapers reflecting various opinions on current socio-political events. Who said print is dead? Prices range from $100,000 to $250,000. A.S. 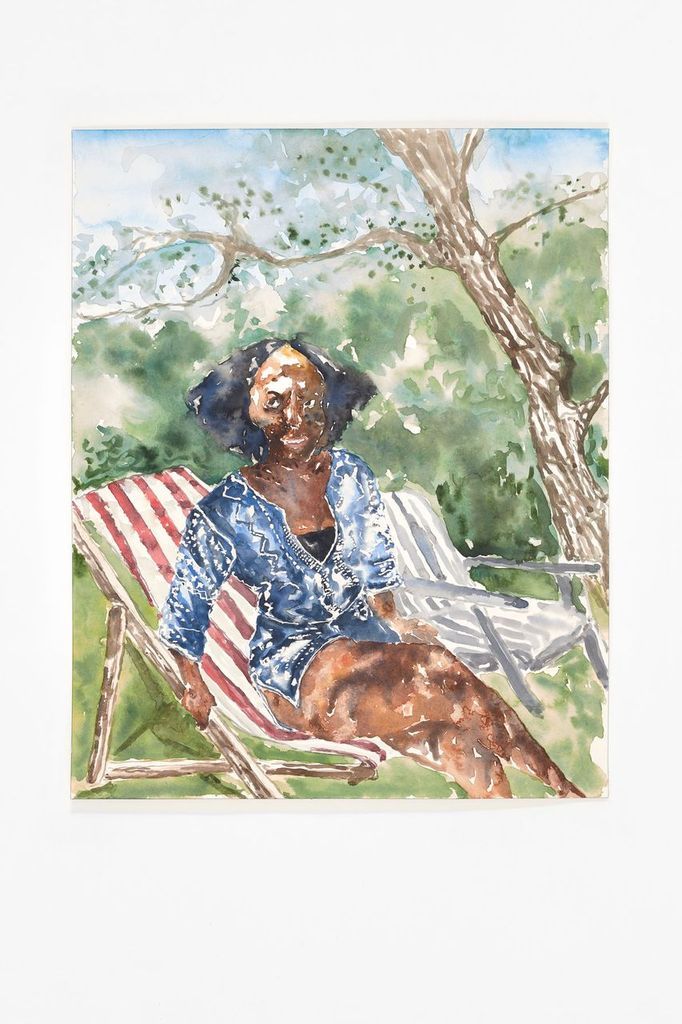 Jane (2020) by Ludovic Knoth, watercolour on paper Courtesy of the artist

Los Angeles-based François Ghebaly gallery is showing a series of watercolour portraits by the Cameroon-born artist Ludovic Nkoth depicting friends, family and fictional figures. His preferred medium is acrylic paint on canvas but Covid-19 prompted a shift in his practice. Nkoth tells The Art Newspaper: “I left New York for two months because I knew the city was going to be hit very hard and my studio building in New York also closed during this time as well.” He subsequently relocated to South Carolina for two months and stayed at his parents’ house where he began making the works. “I saw a few old watercolours I made ages ago; they made me smile so I decided to make more. I’ve always had a deep love for watercolour and the lack of studio space pushed me to revisit this relationship.” The paintings were all made at different times during the pandemic, Nkoth adds. “In the System (2020) was made at the peak of the pandemic. For me my watercolours were always a private practice; it was something I did to step away from canvas and it was a good way to slow down and meditate. I don’t think it’s a departure, I would say I’m now inviting the rest of the world into this private practice I’ve been doing for some time now.” Prices range from $5,000 to $9,000. G.H. 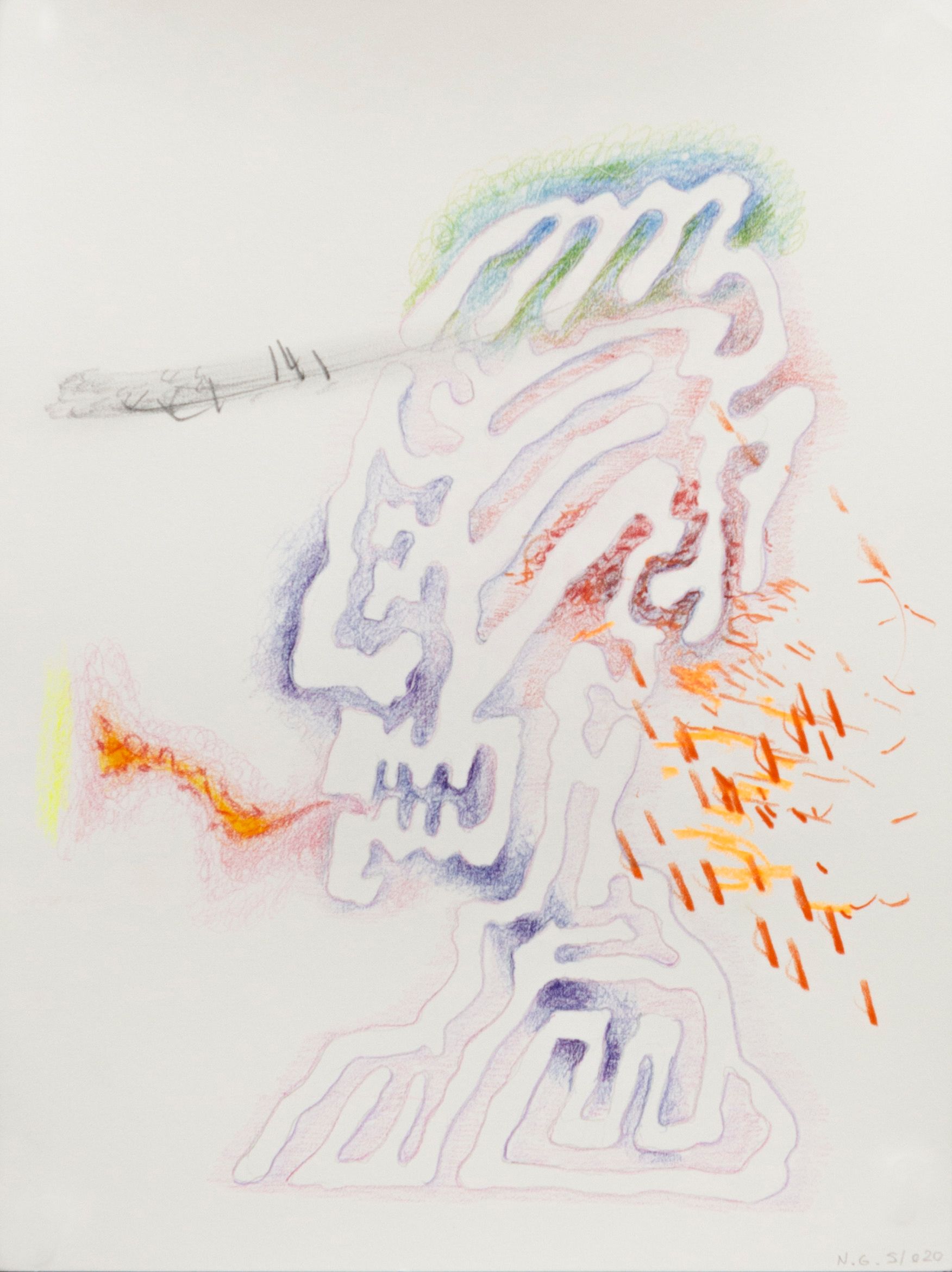 Nicolás Guagnini's Transmisor feliz (2020) Courtesy of the artist and Waldengallery

The Argentinian-born, New York-based artist Nicolás Guagnini is rather known for his biomorphic mixed media works that are often uncomfortably messy and distinctly un-socially distanced in nature: ear shapes attached to feet, noses next to dicks, mouths emerging and receding into amorphous, boneless bodies. It makes sense, then, that his lockdown series of drawings presented at Waldengallery—the only Argentinian gallery and one of just a handful of Latin American galleries included in the online fair—once again play on the discomfiting aspects of unexpected physical proximity, this time depicting schematic head shapes breathing, sneezing and coughing in vivid, almost sickly shades of pastels. The presentation also marks the official announcement of Guagnini’s representation by the Buenos Aires-based gallery. Prices range from $10,000 to $50,000. M.C.