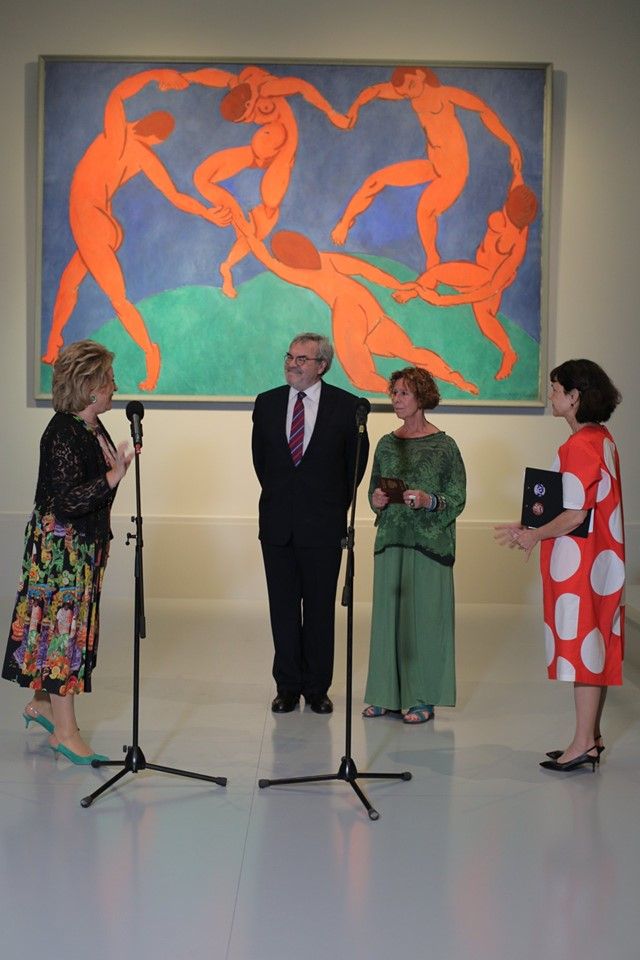 André-Marc Delocque-Fourcaud (centre), the grandson of Sergei Shchukin, was handed a Russian passport at the opening of the Pushkin's exhibition Shchukin: Biography of a Collection © The Pushkin State Museum of Fine Arts

André-Marc Delocque-Fourcaud, the grandson of the visionary collector of French Impressionist and Modern art Sergei Shchukin, has been granted Russian citizenship by President Vladimir Putin, coinciding with the opening of a blockbuster exhibition Shchukin: Biography of a Collection at the Pushkin State Museum of Fine Arts (19 June-15 September).

Putin signed the citizenship decree, which also applies to Delocque-Fourcaud’s wife, Christine, on 13 June. On Monday at the Pushkin, Valentina Matviyenko, the chairwoman of the Federation Council, Russia’s upper house of parliament, presented the couple with Russian passports, the museum reported in a Facebook post that showed them receiving the documents as they stood in front of the exhibition’s centrepiece, Henri Matisse’s Dance, commissioned by Shchukin in 1910. The ceremony was also shown on state television.

Dance is on loan from the State Hermitage Museum in St. Petersburg and the exhibition continues the symbolic unification of the Shchukin collection, which was seized by the Soviet state after the Bolshevik Revolution and ultimately divided between the State Pushkin Museum of Fine Arts in Moscow and the State Hermitage Museum in St Petersburg. The Fondation Louis Vuitton in Paris was the first museum to bring the collection together in a blockbuster show that attracted a record number of visitors. It was the second-most visited exhibition of 2017, according to our annual Attendance Figures survey.

Four further exhibitions highlighting the collections of the Shchukins and the equally art-minded pre-revolutionary Morozov brothers are in the works.

Delocque-Fourcaud, who has an apartment in St. Petersburg and is a guest curator of the Shchukin exhibition, tells The Art Newspaper that "it is a great honour indeed to be readmitted into this great nation, the first documents about my family appear in the early 1600s"

In the past, Delocque-Fourcaud engaged in legal wrangles over international loans by Russia of works from his grandfather’s collection and demanded their seizure to be acknowledged as illegal. "Indeed, the conflict of principles around the appropriation of the Shchukin collection by Lenin remains open. It is not the first nor the last time that the citizen of one country expresses their disagreement with the government of their country. That does not make him an enemy of the people, neither does it forbid him to cooperate with state institutions in other fields like major art exhibitions," Delocque-Fourcaud says.

The former director of the Pushkin, Irina Antonova, who is now president of the museum, resigned in 2013 after trying to convince Putin to return Shchukin and Morozov collection works that are at the Hermitage to Moscow.

Shchukin’s mansion where he displayed his collection is near the Pushkin but is currently cut off from public access since it is on the territory of the ministry of defence. Matviyenko said at the opening that it should be handed over to the museum, the Tass news agency reported.