Coronavirus complicates US Census—and the arts funding tied to it

Art + Action has launched a multi-pronged initiative to reach Bay Area residents in hard-to-count communities, and galvanise the art world to get behind the national headcount 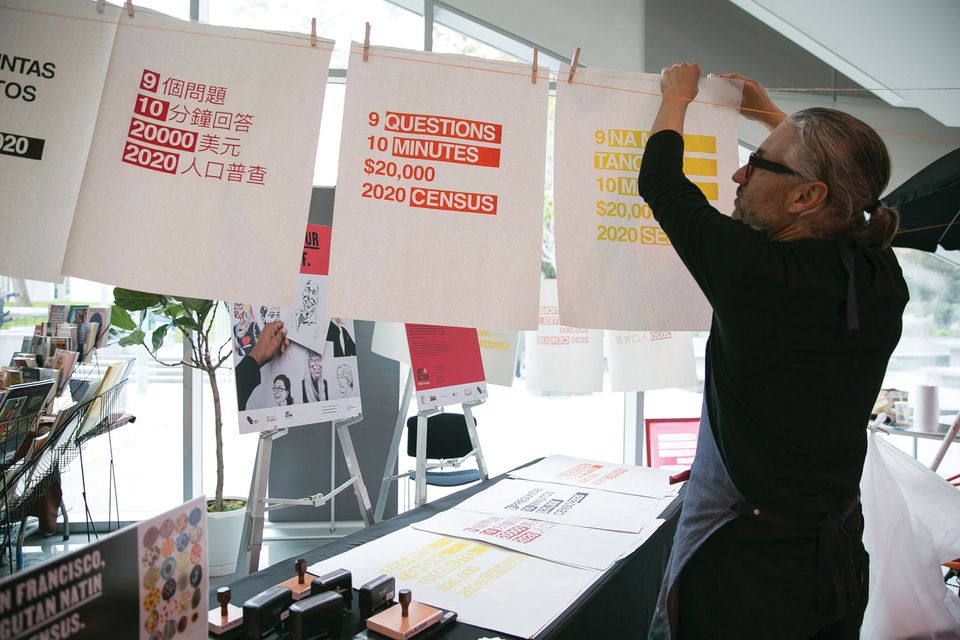 The US Census, the once-in-a-decade headcount of the nation’s population, is underway until 31 July. If mobilising Americans to participate was already going to be an uphill struggle, the coronavirus (Covid-19) pandemic just added a gargantuan obstacle. But with billions in public funding depending on census data, including for arts and culture hard hit by the closures necessitated by the pandemic, an accurate picture of the American public and its needs is more important than ever.

Art+Action, a San Francisco-based coalition of civic leaders, artists and designers headquartered at the Yerba Buena Center for the Arts (YBCA), and powered by the City and County of San Francisco Office of Civic Engagement & Immigrant Affairs (OCEIA), has for months been planning a multi-pronged campaign to rally communities across the Bay Area to participate. As much as $17bn of the city’s budget depends on the participation of the whole population. The plan had included targeting people at major events and along busy thoroughfares across the region, but with Bay Area residents now “sheltering in place”, the organisation is pivoting its work entirely online.

“If social distancing becomes the norm because we have to quell the spread of this virus, we must find new ways to connect with one another,” says Deborah Cullinan, the director of YBCA. “We know that isolation contributes further to our lack of trust in institutions. We know that people are more and more scared to engage.”

The organisation acknowledges that communicating the stakes of the census poses a particular challenge when residents’ very lives and livelihoods are now on the line, but they also see an opportunity to emphasise how invaluable this funding is in times of crisis. “The census is truly an essential service; it provides essential services such as emergency relief,” says Amy Kisch, a former art advisor who works at the intersection of art and social change, and who is coordinating the project across San Francisco. “The data determines the funding that we need in moments like this. It ensures the health of our community for the next ten years.”

The campaign, involving the work of Emory Douglas, Hung Liu, Ana Teresa Fernandez and numerous other artists, was to include an on-site exhibition and “civic experience” at YBCA, where visitors could complete the form and reflect on what it means to be counted. Now, the offsite banner and poster campaign and social media initiatives will become the centrepiece.

The posters, which are already decorating transit shelters, kiosks and billboards around the Bay Area, feature bold lettering calling on residents to “Come to Your Census,” in English, Spanish, Chinese and Tagalog, accompanied by colourful paintings and graphic imagery. Now the focus will move online. They are targeting 20 communities they have identified as “hard to count” via Facebook gatherings, Instagram and YouTube videos, and by blanketing various corners of the internet. (Those hard-to-count communities include artists themselves, who sometimes live in unconventional settings, with multiple roommates or as collectives.)

The organisation has worked with students from California College of the Arts to develop an algorithm and tool that creates online banners and badges to help produce some “viral excitement” around participating in the census at home and enabling people to refer their network to the online form. The organisers are hopeful that participating in the census will help boost peoples’ moods at a time when they may be feeling despair or a sense of loss of control. “You can take a panicked road—this is the end of days—or you can be future-forward,” says Kisch. “It helps to envision a positive outcome for the next ten years. Participating is an act that helps us to reclaim some kind of power.”

The campaign also includes a toolkit so that individuals and organisations can reach their own networks (schools, businesses, religious groups) through customised posters. The hope is that other arts spaces across the country—with networks of creative people and digital tools at their fingertips, and perhaps a little more time on their hands— might also be galvanised to spread the message. “It’s important that our arts structure across the country understand the value of what we can bring to this and figure out how to do it,” Cullinan says. “If you want to make change, you need to work with artists. Artists will be able to reach people who are hard to reach, to get people engaged around the issues, to connect people and guide them away from dystopia.”

The census, after all, is “the only really inclusive democratic act this country affords”, Kisch says.

Appeared in The Art Newspaper, 322 April 2020
More NewsTopics US politics