Culture fights back in Tunisia

Sufi-inspired exhibition aims to rescue Islam from the extremists

Seifeddine Rezgui, the young man who massacred 38 holidaymakers on a Tunisian beach in June, loved to breakdance. Then the dance classes shut down and he was left with nothing but the fundamentalist teachings of the Salafists, which gave him a community of brothers and an all-embracing mind set.

The desolation of the lives of young people in the Middle East and North Africa is little understood in the West. These are countries where 45% of the 400 million people are under 20 years of age, where the education is rigid and usually not fit for modern purposes, where there is no work so no money, and without money, no marriage, and without marriage, no sex or even courtship. All considered, it is surprising that not more of them are seduced into the murderous cult of Isil that promises to give meaning to their lives, money and a woman.

To fight back against this, economic development is vital, but also every kind of measure to enrich their lives—let’s call it culture. But what kind of culture? The Gulf rulers are offering their rich public very expensive museum projects, but in the populous “old Arab” nations, there is self-generated culture, such as electro chaabi, the hip hop of the slums of Cairo, in which the lyrics express all the disgust they feel for fat cat authorities as much as for religion. The graffiti art movement has the same roots, and in Saudi Arabia there are the satirical skits on YouTube by the group of young men calling themselves Telfaz11, watched by many millions. 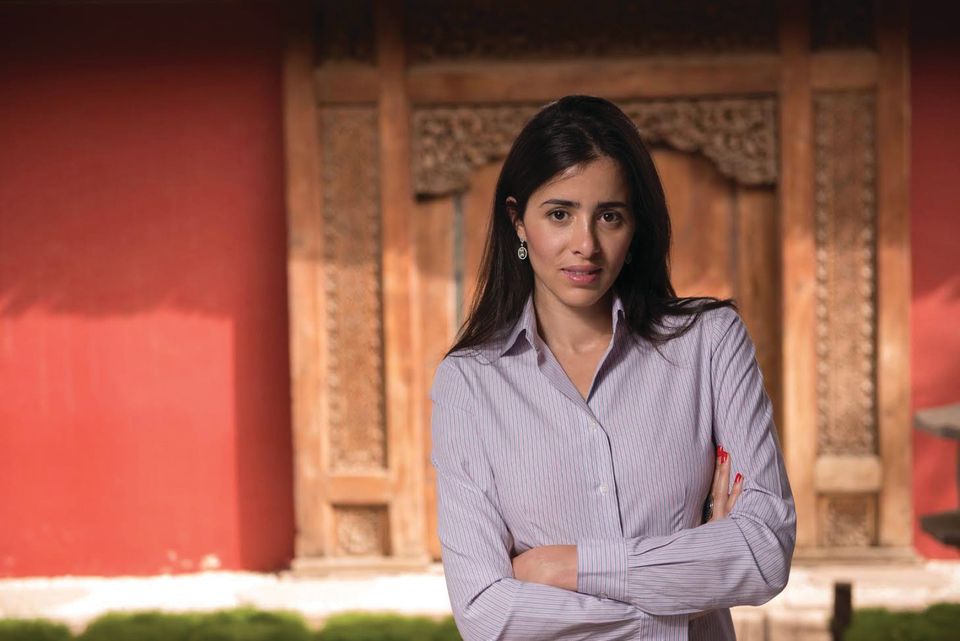 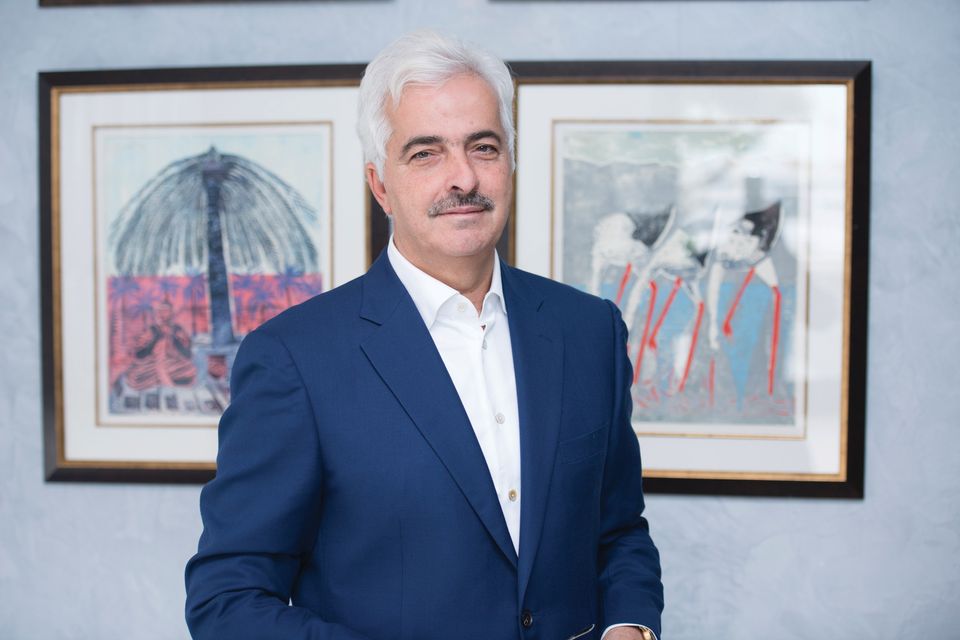 Good feeling from the Lazaars

It is to try to tackle this need for variety and meaning at both an institutional and street level that the Kamel Lazaar Foundation stepped into the uncertain, already traumatised situation between the massacre of 22 people at the Bardo Museum in Tunis on 18 March and the 26 June killings.

The foundation belongs to the eponymous philanthropic Tunisian who set up Swicorp, based in Geneva, which provides financial services to the Middle East and North Africa, and Saudi Arabia in particular. Since 2012 the Lazaars have financed and organised an international cultural meeting called Jaou (good feeling), but after 18 March they decided they had to make a special effort in order to help the museum and their country. Speakers were brought in from farther afield, members of government were involved and the international press invited.

The two-day symposium at the end of May focused on visual culture in this time of conflict. Many truths and truisms were said, while the presentations by artists were all interesting, especially those of the Iraqi Hiwa K, who has taken metal from armaments in Iraq’s conflict zones and recast them as a bell, with the antiquities destroyed by Isil in relief around the rim. Slavs and Tatars reminded us of the Sufi mosque created on Mercer Street in New York by Dan Flavin for the Dia Foundation in 1980, but which nobody in the US seems to remember nowadays.

But the room really came alive when a small, robed man made a speech in beautiful classical Arabic, welcoming everyone and praising peace. He was an imam from a Sufi mosque in town and Sufism, the mystical tradition in Islam that is much followed in Tunisia, has been under attack there by Salafists since the revolution. 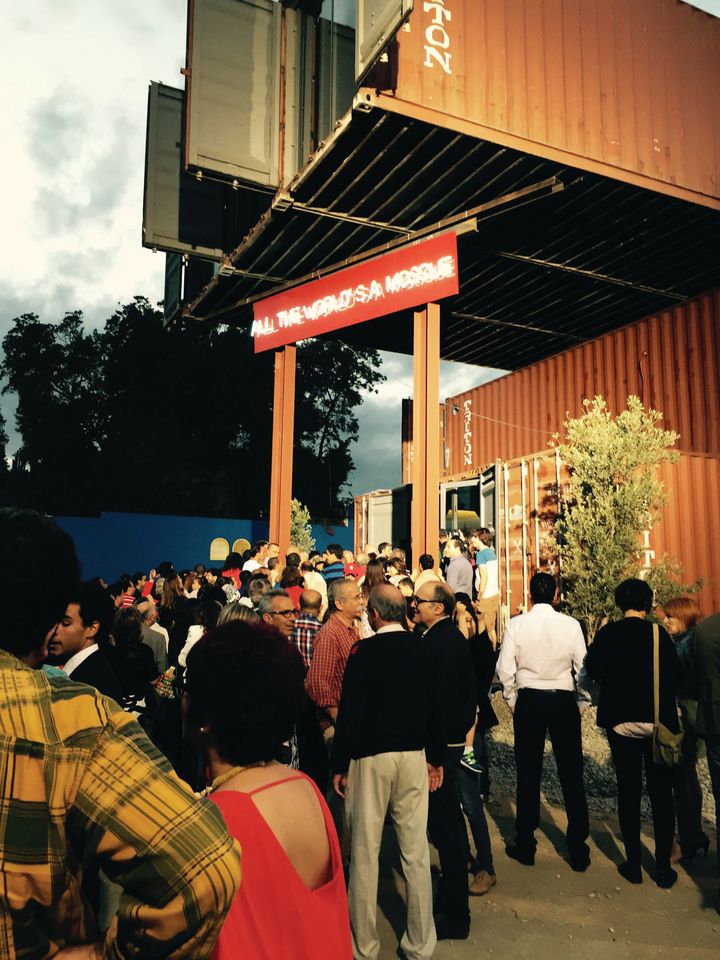 The All the World’s a Mosque exhibition, above the archaeological site of Carthage. Photo: Anna Somers Cocks

All the World’s a Mosque

It was the imam’s message that was expressed by Lina Lazaar in her show, All the World’s a Mosque, which opened in a cantilevered construction of 22 containers just above the archaeological site of Carthage. She put this together with works by 22 artists from the Middle East and Tunisia in little more than three weeks after the Bardo attack.

All the World’s a Mosque means the exact opposite of what Isil wants, which is to force their version of Islam on the whole world. Rather, it expresses the Sufi idea that the holy is immanent and so within us. As the Jaou introduction says, Lina Lazaar wants to shine a light on the difference “between those who simply have faith and those who use it as an ideology; between those who conceive the belief as a ritual and those who define it as spirituality above all”.

True to its French heritage, culture in Tunisia tends to be offered as a commodity for the elite, but this exhibition was free and open to all, and huge crowds from all walks of life queued to see works by Middle Eastern and Tunisian artists that engaged with the question of religion. Every artist was also invited to say in one sentence on the label when (or if) they thought of God. There was some anxiety about how the religious authorities would react, and great joy when the mufti of Tunis turned up and gave his approval.

Among the artists was one of Saudi Arabia’s most famous, Ahmed Mater, whose photos of the grotesquely commercialised new architecture around the shrine of Mecca need no commentary. Another Saudi, Nasser Al Salem, makes symbolic use of Arabic and pseudo calligraphy—in this case, a subtly altered barcode, which said: “Allah does not like those who commit excess.”

A video by the Iraqi artist Adel Abidin was not only an ecological warning but a metaphor, he said, for the way that the true meaning of Islam is being drowned out by extremists. It showed the call to prayer from underwater so that only bubbles were visible and the voice strangulated.

Perhaps the most speaking work of all in today’s context of hate crimes and fundamentalism was the piece by the Saudi woman artist Maha Malluh, shown at the Edge of Arabia exhibition at the 2009 Venice Biennale and called Food for Thought. It was a baker’s tray, which once would have carried nourishing bread, filled with cassettes of the fundamentalist sermons delivered on Fridays by the Salafist clerics of Saudi Arabia, and which people used to listen to at home and driving the car. It is from this kind of brainwashing that Jaou and its artists are fighting to rescue the soul of Islam, but they are few, and the Salafist mosques and clerics are many. 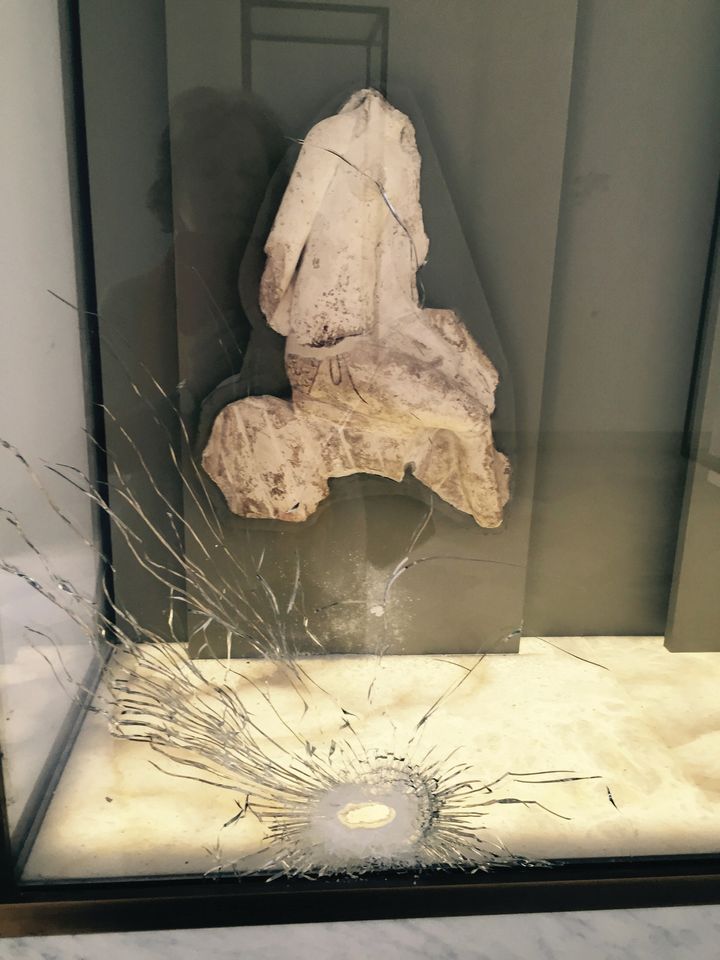 Case in the Bardo Museum, Tunis, with a bullet hole from the terrorist attack of 18 March 2015. Photo: Anna Somers Cocks

The Jasmine revolution began the decline of Tunisia’s economy, the terrorists are completing it

Tunisia’s Jasmine Revolution in 2011 was the first of the Arab Spring and is praised in the West as being the only one to have transitioned successfully to peaceful democracy, but it has not been good for the economy. Tourism, which represented 8% to 10% of GDP before 2011, was down to below 6% before the two attacks. Investment has collapsed and the dinar has halved in value. The public sector has embarked on an unsustainable policy of taking on thousands more employees to calm potential unrest and appease the unions. Amel Karboul, the minister of tourism in the post-revolutionary technocratic government, says that general insecurity and a disunited government hold back a revival of the economy, which had been growing at a rate of 4% to 5% a year before the revolution. As Tunisia’s most important museum, the Bardo used to attract nearly half a million visitors a year, but after 18 March numbers were down by 50% and will surely fall further. It is full of the archaeological remains of what was once a rich Roman province and, before that, Carthage. Exquisite mosaics are its strong point, and not for nothing is the memorial to the murdered tourists and staff made in mosaic.