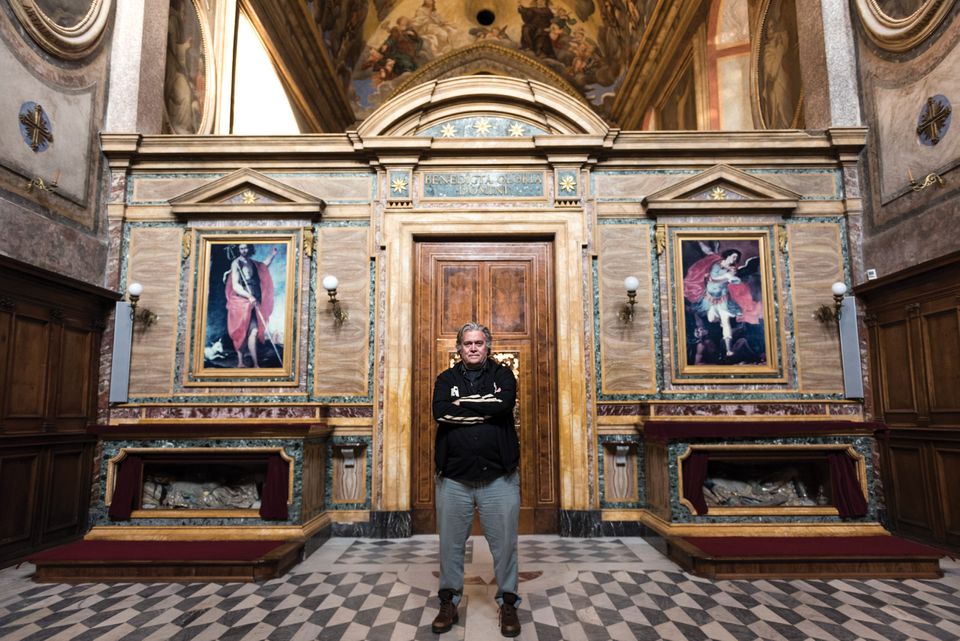 In a 13th-century monastery, the Dignitatis Humanae Institute hopes to establish a “school for gladiators”, espousing the views of Steve Bannon © Marco Bonomo/Parallelozero

As the battle over the future of a spectacular 13th-century monastery east of Rome heads to court, the Italian ministry of culture has spoken for the first time about why it entrusted the historic building to a religious organisation affiliated with US president Donald Trump’s former chief strategist, Steve Bannon, which it is now trying to evict.

Antonio Lampis, the director general of museums at the ministry, tells The Art Newspaper that the Italian government awarded a 19-year lease on the Certosa di Trisulti, a former Carthusian hilltop abbey set in dense forest near the village of Collepardo, to a religious lobby group set up by the British conservative Catholic Benjamin Harnwell, because of “extreme” staff shortages at the ministry.

The surprising admission suggests that the government failed to adequately review Harnwell’s bid for the monastery, which he submitted on behalf of the religious organisation he founded, the Dignitatis Humanae Institute (DHI). Harnwell dismisses the ministry’s explanation and notes that the officials in charge of evaluating his proposal for the historic building had plenty of time and staff to assess it.

The academy was intended to provide instruction in theology, philosophy, history and politics, and to “institutionalise the thoughts and political insights of Steve Bannon”

The contract awarding the building to the DHI was finalised in January 2019 as part of an initiative designed to engage the private sector in the management of the numerous cultural sites in Italy that require occupation and restoration. This stipulated that the DHI would invest €1.9m over the duration of the lease towards the restoration of the monastery.

The decision to entrust the historic building complex, which is a listed national monument, to a right-wing religious group with self-declared political aims sparked protests and parliamentary questions after Harnwell and Bannon revealed that they intended to set up a “school for gladiators” in which they would train the next generation of “culture warriors”. The Academy for the Judeo-Christian West was intended to provide instruction in theology, philosophy, history and politics, and to “institutionalise the thoughts and political insights of Steve Bannon”, Harnwell says. Bannon and other right-wing political strategists and leaders were expected to teach at the school.

In April, Nicola Zingaretti, the secretary of the Democratic Party and president of the Lazio region, wrote to the then culture minister Alberto Bonisoli decrying the “openly xenophobic” political activities planned for a monastery “which has been a place of prayer, peace and meditation for eight centuries”, while Nicola Fratoianni, the secretary of the Italian Left party, questioned the decision twice in parliament.

After investigations by Italian reporters revealed apparent irregularities in the DHI’s application for the building (Harnwell disputes these alleged irregularities), Bonisoli announced in May that he was initiating eviction proceedings. The process stalled with the collapse of Italy’s ruling coalition but a decree annulling the DHI’s lease, which is signed by Lampis, was finally issued in October. Harnwell and his associates, who remain in residence at the monastery, are now appealing the decision.

The culture ministry is now arguing that the DHI did not meet the criteria required to take part in the competition for the management of the monastery and accuses the religious organisation of including “false” statements on its bid for the building. (Harnwell says no false statements were made.) But a five-person commission set up by the ministry to judge applications for the monastery’s takeover met four times from April to June 2017 to assess the DHI’s eligibility and its proposals for the Certosa; it finally awarded the DHI’s application an overall score of 72.6 out of 100. So why did these alleged “false” statements not emerge when the commission was evaluating the DHI’s proposal? 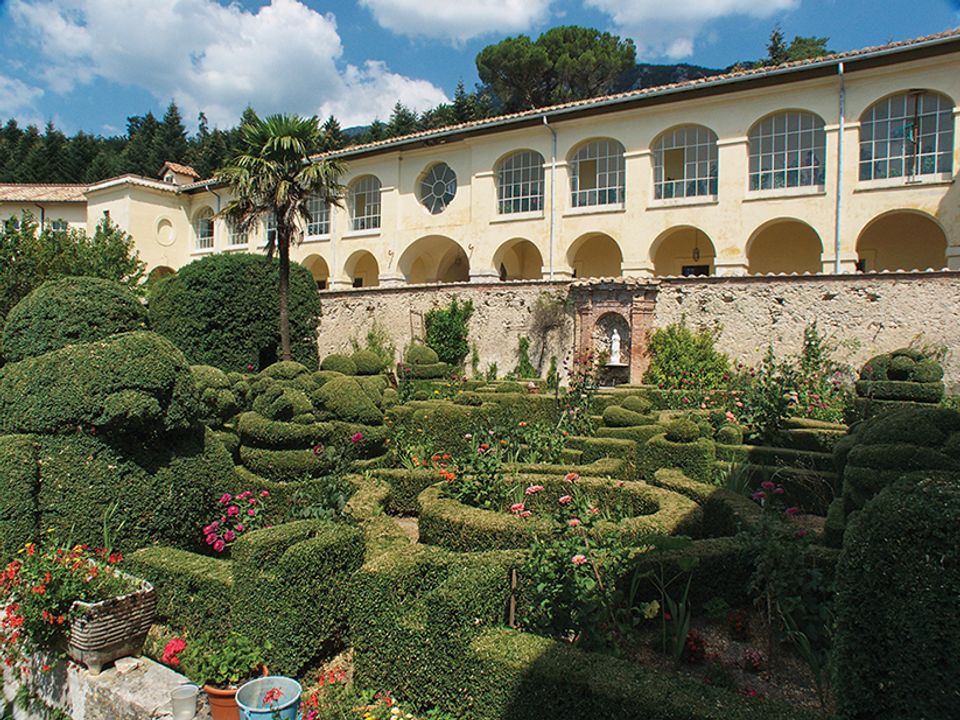 The lease on the 13th-century Certosa di Trisulti, a listed national monument, stipulated that the Dignitatis Humanae Institute would invest up to €1.9m in its restoration © Giuseppe Savo

According to Lampis, who took up his current post in September 2017, the ministry’s entire museum division was hampered by a severe staff shortage. He says: “I cannot speak for the commission, as I arrived [after they had concluded the selection process] but, examining the situation, I have been able to ascertain that our offices at the time were affected by extremely serious, I would say extreme, staff shortages for the management of 500 important state-run museums as well as those cultural assets which the ministry intended to entrust to private organisations. Today these staffing conditions are still critical, but less dramatic.”

The ministry’s decree annulling the DHI’s lease notes that the organisation’s application was reassessed “accurately” in July 2019 and that this reappraisal revealed that the group did not meet the required criteria to take part in the competition for the management of the 13th-century abbey.

One crucial issue concerns the organisation’s legal status in Italy at the time of the tender. The ministry is arguing that, under the terms of the competition for the monastery, participating organisations were required to be recognised as legal entities of a certain type under Italian law. But the DHI, which was founded in the European Parliament in 2008 and registered by Harnwell as a private limited company in England in 2013, did not have this status at the application deadline on 16 January 2017; the DHI was granted the disputed legal status in Italy only in June 2017, five months after the competition deadline. However, Harnwell says that the Italian Ministry of Culture was fully aware of the DHI’s legal position at all times and encouraged him to apply for the competition anyway. 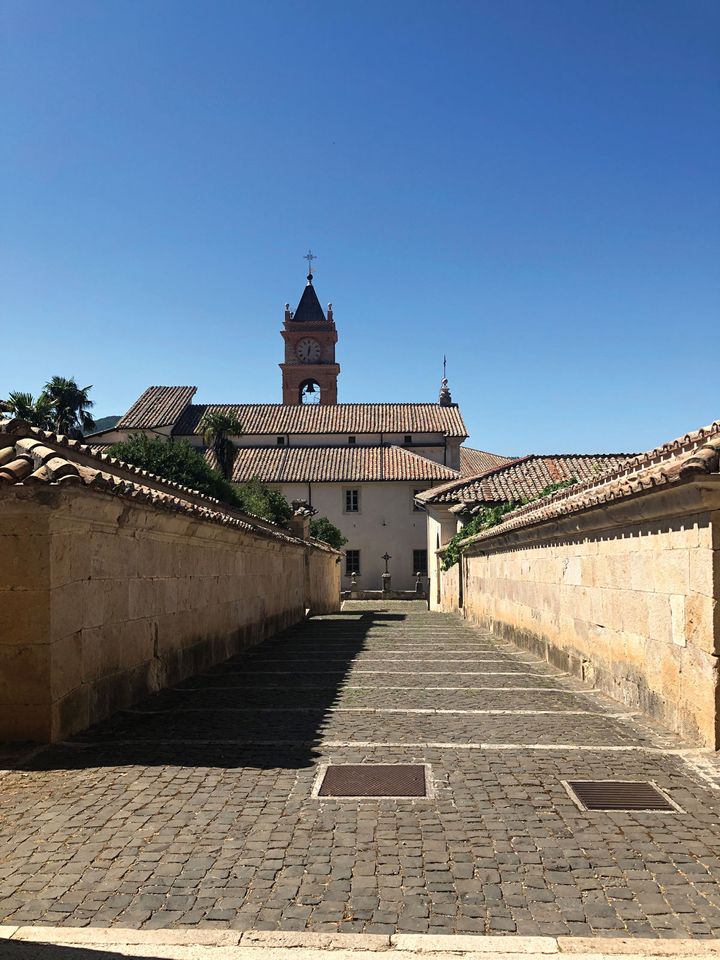 On site at the Certosa di Trisulti © Cristina Ruiz

“The idea that the ministry of culture only found out recently that we didn’t have officially recognised status at the time of the tender is 100% bullshit, and one that I look forward to fighting in court,” Harnwell says. “I was in many discussions with the ministry before the tender was called because I wanted to check that the DHI had all the requisites to participate. The ministry assured me at the time that we didn’t need to be officially recognised as a legal entity to participate in the tender but only, in the case of victory, would it be necessary to have this status in order to sign the lease for the monastery. I was advised, therefore, that if I were able to formally file the request for legal status before the tender closed, I could then put the date of this request in with our offer. Which is exactly what I did.”

The DHI is now facing a legal battle on three separate fronts. As well as the annulment decree issued by the ministry of culture, which the DHI is appealing at the administrative tribunal of the Lazio region, an investigation is under way at the Corte dei Conti, Italy’s court of auditors. This is examining the DHI’s failure to pay its agreed annual rent of €100,000. The DHI argues that, under the terms of its lease, rent is payable every April for the preceding year’s occupation and so 2019 payment will not be due until April 2020. Finally, the public prosecutor in the city of Frosinone is also investigating the DHI over its application for the monastery. Harnwell believes that all these proceedings are part of a politically motivated attempt to “close down and suppress Steve Bannon’s global populist-nationalist revolt, which threatens the international elite’s long-term existence”.