Artists and dealers resist the development of New York’s Chinatown 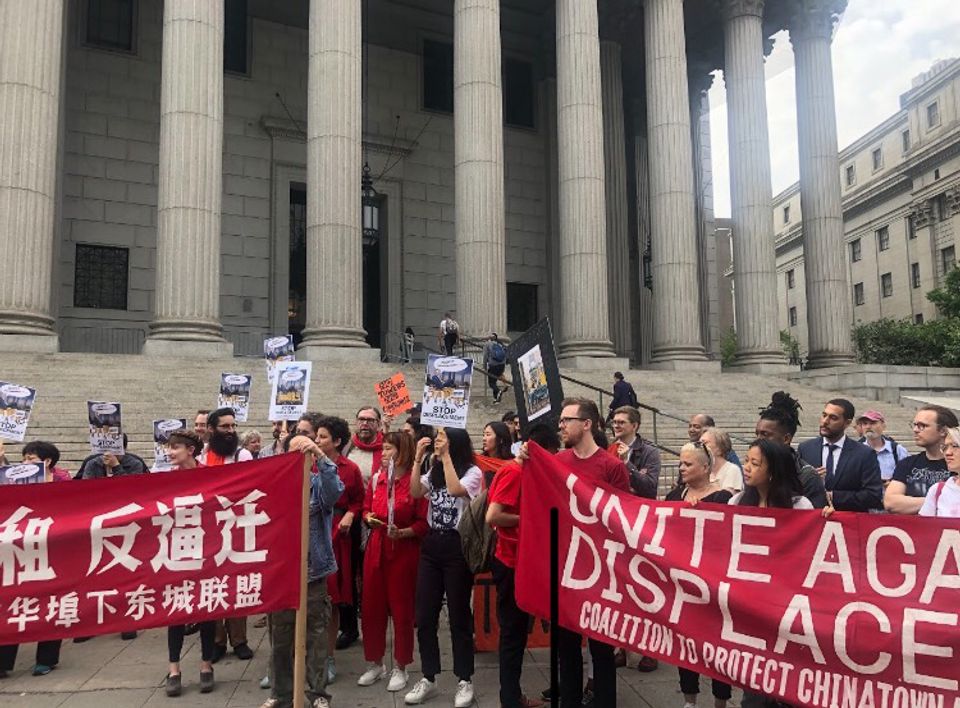 Local business owners and activists were joined by artists and gallery owners for a press conference on the steps of a Manhattan court house before the hearing Photo: Caitlin Kelmar

The construction of four new luxury towers in Manhattan’s Two Bridges neighbourhood has prompted the group Art Against Displacement (AAD)—a coalition of dealers, artists and arts professionals who live or work in the area—to rally in support of a lawsuit filed by the Lower East Side Organised Neighbours (LESON) against various departments of the City of New York, which green-lit the towers in 2018. Advocates from AAD are protesting today at a Manhattan Supreme Court hearing regarding the towers, which are being built by developers JDS, CIM and L&M.

Along with the Coaltion to Protect Chinatown and the Lower East Side and other grassroots organisations in the area, members of AAD have actively lobbied against the towers. The LESON lawsuit is one of several filed in recent months, brought by local organisations, activists, residents and even the City Council Borough President. They say the new developments would threaten a nearby senior housing unit, put massive strain on the local environment and open up the area to more predatory rent-gouging and displacement. The LESON lawsuit charges the city with violating zoning laws and environmental review processes in letting the developments move forward and it is these concerns that will be addressed in the court hearing.

Among the art community members speaking out against the towers is Margaret Lee, an artist who cofounded AAD in 2017 and co-owns the local gallery 47 Canal; Heather Hubbs, executive director of NADA, the non-profit that supports dozens of galleries in the area; and Vanessa Thill, an artist who works with many of the Lower East Side and Chinatown galleries, among others.

The art world is in some ways an unlikely partner in the effort to curb gentrification, given the role galleries tend to play in that very process. But, says Thill, AAD is intent upon supporting neighbourhood residents—who often lack the same safety net that members of the art world enjoy—and working to amplify the efforts of groups like the Chinese Staff and Workers Association. They are also fighting to protect lower-income galleries in the area, many of which operate on a shoestring and constantly face threat of closure.

David Fierman, a dealer whose gallery is located across from One Manhattan Square, the recently built luxury behemoth developed by Extell in Two Bridges, says that adding four more towers to the neighbourhood is inconceivable. “Over 3,000 million-dollar apartments in this tiny neighbourhood with one subway stop and no infrastructure? I can’t imagine there being that many luxury units in this [here],” he says, adding that the area is one of the few places in Manhattan that feels “like a real place as opposed to an anonymous mall”.

Update as of 6 June: Judge Engoron, presiding over the 5 June hearing, issued an injunction against the Two Bridges tower developers until 2 August in light of the lawsuits and complaints brought against them.