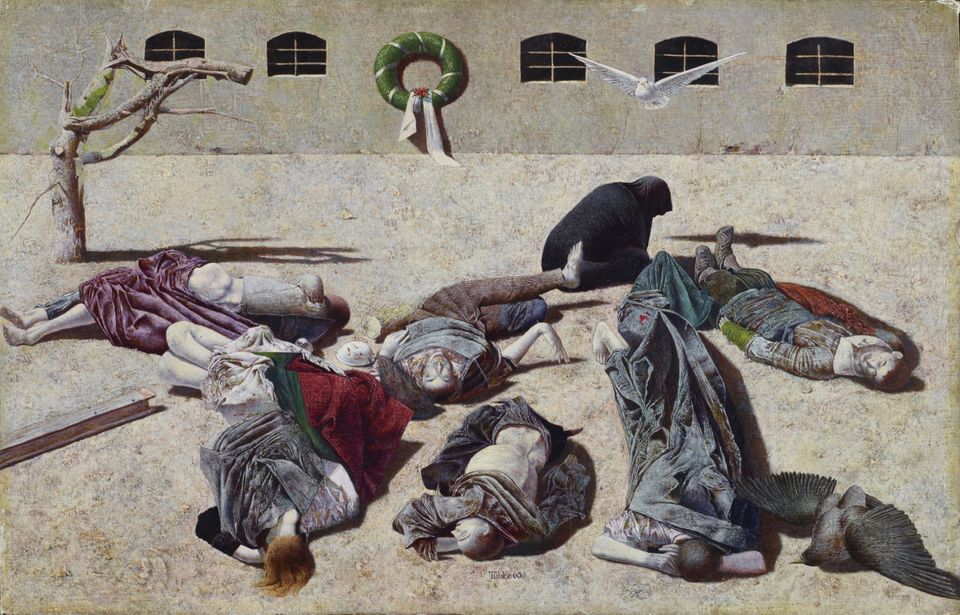 Requiem (1965) by Werner Tübke, one of the few artists of the GDR who gained recognition in West Germany VG Bild-Kunst; courtesy of Klut/Estel

Hilke Wagner, the director of Dresden’s Albertinum, is seeking to turn rancour into opportunity after finding herself at the centre of a bitter dispute over East German art. A West German, Wagner was accused by the regional Sächsische Zeitung newspaper last September of neglecting artists of the German Democratic Republic (GDR) in favour of contemporary art. In June, she responded with a rapidly assembled exhibition of the museum’s East German paintings and sculptures, many of which are on display for the first time in years.

In his provocative article, Paul Kaiser, a local art historian, had expressed dismay that the Albertinum, the main showcase for Modern art in the Saxon capital, had consigned all the art of Communist East Germany to the depot. Wagner countered in the same newspaper that more than 70 works created in the GDR between 1949 and 1989 were on view at the time and that others were on loan elsewhere. “I was at first very upset and hurt,” she says, “but then I found new courage. It’s a wonderful chance to put all this on the table for discussion.”

There followed what has been described as a “proxy debate”—apparently about art, but in reality a platform for a host of simmering grievances about East-West German relations. The Albertinum became a focus of resentment about a Western-dominated historical narrative that, in the view of many in the East, overlooks their experience. Wagner was inundated with hate mail. “I was shocked by the number of letters and by the tone,” she says. “The vehemence of the debate surprised us all.”

The museum seized the initiative and held an open discussion on the dispute last November. Around 600 Dresdeners showed up. “We have to build bridges and speak to each other,” Wagner says. “Thirty years after the fall of the Berlin Wall, it is still very necessary, even if it is still very difficult.”

Seven months later, on 15 June, the museum opened an exhibition co-organised by Wagner titled Focus Albertinum: East German art and sculpture from 1949 to 1990 (until 7 January 2019). The show of almost 150 pieces, mostly paintings, is drawn entirely from the Albertinum’s 900-strong collection of East German works and explains their acquisition history. It is accompanied by an impressive array of talks and events on subjects ranging from East German art, architecture and film to the stubborn prejudices held by Germans from either side of the Iron Curtain.

Werner Tübke, one of the few East German artists who gained recognition in West Germany, is represented with his 1965 painting Requiem and the 1972 Portrait of a Sicilian Landowner with Marionettes. The latter picture was bought by the Albertinum at its own GDR Art Exhibition in 1973 and lent for Documenta 6 in 1977, the first edition to feature East German artists.

But Joachim Heuer, a pupil of Oskar Kokoschka who was heavily influenced by Cubism, was not permitted to exhibit until after the fall of the Berlin Wall, aged 90. His Still Life With Coffee Grinder and Cups (1958) was among a selection of works he donated to the Albertinum in 1990. Other post-GDR acquisitions in the new display include Karl-Heinz Adler’s abstract oil paintings.

Planning for the exhibition revealed some significant absences in the Albertinum’s collection due to a restrictive acquisition policy in the GDR era, Wagner says. For instance, the museum has no works by the Dresden-born artist A.R. Penck, who emigrated to the West in 1980. Nor is the Dresden-based experimental collective of Auto-Perforation performance artists represented. “We are still trying to fill the gaps,” she says.