In a crowded press conference in Cairo on Thursday, Egypt’s Ministry of Antiquities announced the discovery of what are probably two chambers behind the walls of King Tutankhamun’s tomb in Luxor. Although officials were unable to give any specific details of what lies hidden beyond, radar scans have revealed the possible presence of door lintels and of metallic and organic items, which increases the likelihood of preserved grave goods. Mamdouh Eldamaty, Egypt’s head of antiquities, said in a press release that this could be the “discovery of the century”. 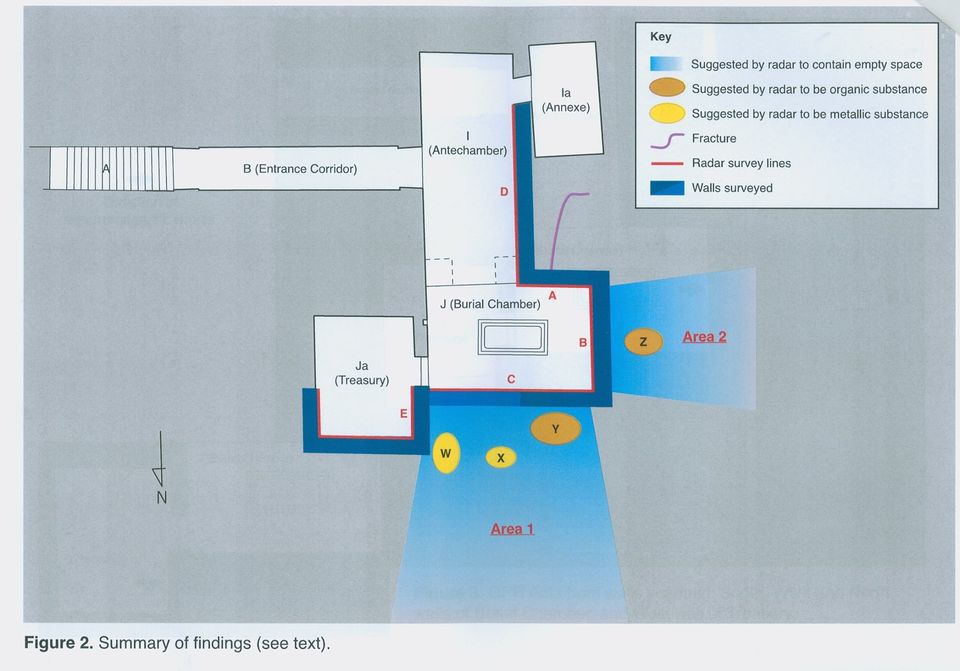 Radar scans have revealed the possible presence of door lintels and of metallic and organic items, which increases the likelihood of preserved grave goods

The search for hidden chambers within Tutankhamun’s tomb began in August last year, when Egyptologist Nicholas Reeves published a theory arguing that beyond the boy pharaoh’s burial chamber lay additional rooms, and perhaps even the sealed-off tomb of Queen Nefertiti. Reeves developed his theory after analysing high-resolution scans of the tomb walls by the conservation company Factum Arte, which created a replica of the famous tomb.

Some anomalies in the images were interpreted by Reeves as the “ghosts” of doorways, sealed and plastered over before Tutankhamun’s burial. A subsequent physical examination of the tomb walls, undertaken by the Ministry of Antiquities and Reeves, added weight to his suggestions. Hidden for more than 3,000 years, these rooms—identified behind the burial chamber’s northern and western walls—were revealed using a modified ground penetrating radar scanner in November 2015. Further radar scans are scheduled to take place in late March, with the results of these investigations to be announced in April.

Mummified Llamas, sacrificed to the gods by Incas, uncovered by archaeologists in Peru

Mummified Llamas, sacrificed to the gods by Incas, uncovered by archaeologists in Peru