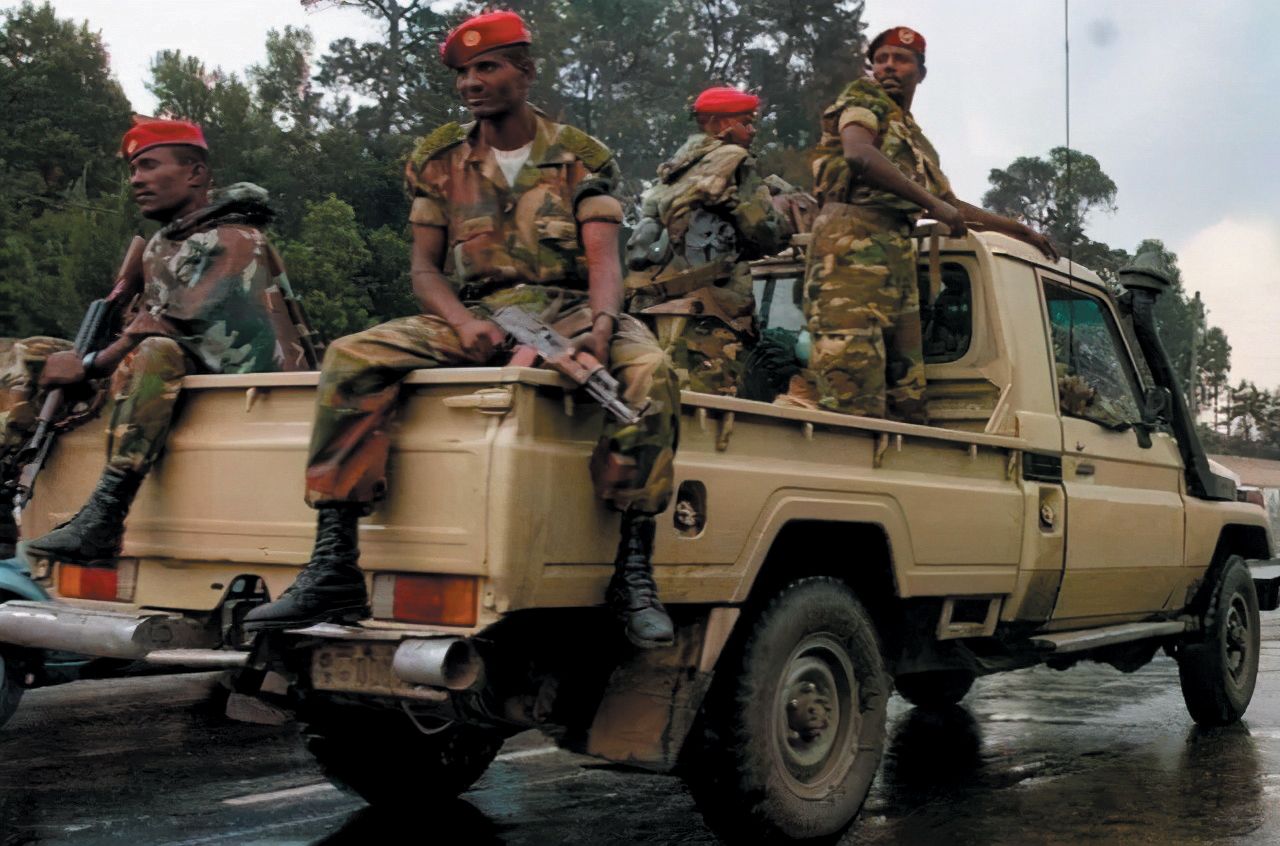 The first eyewitness accounts of a massacre at Axum, a historic town in the northern Tigray region of Ethiopia, have started to emerge as the strict communications blackout imposed on the area nearly four months ago by the Ethiopian prime minister, Abiy Ahmed, appears to be easing.

A deacon at the Church of St Mary of Zion, the country’s most sacred Ethiopian Orthodox Church where the local faithful believe the Ark of the Covenant is housed, told Associated Press that soldiers from Eritrea, Ethiopia’s northern neighbour, stormed the church on 28 November as a service was underway and shot hundreds of worshippers. The killing continued for hours on the streets outside; the deacon estimates that around 800 people were murdered. Soldiers would not allow burials so the bodies remained in the streets for days with hyenas descending from the hills at night to feed on the corpses. After the Eritrean troops finally retreated, locals were able to bury the dead in a mass grave near the church. 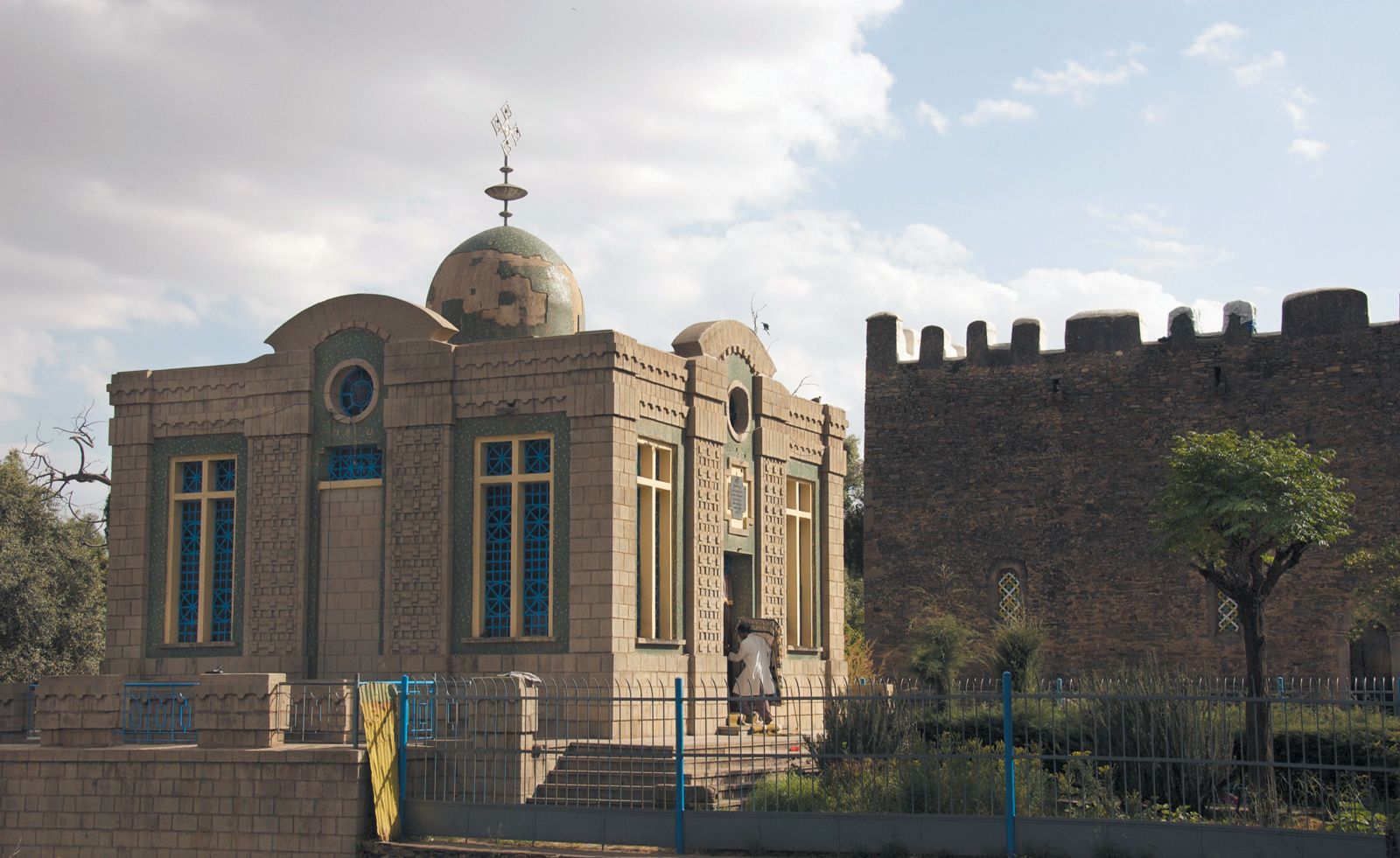 Eritrean soldiers are accused of a massacre in the church of St Mary of Zion in Axum Photo: © Alan Davey

Alongside the emerging evidence of atrocities, numerous reports suggest that cultural sites in Tigray are being targeted and international experts warn that “cultural cleansing” is taking place. The sixth-century, clifftop Debre Damo monastery was bombed and then ransacked after Eritrean soldiers scaled an 80ft cliff to reach it before removing precious manuscripts from the building, according to a report in the Times. The monks’ ancient dwellings nearby were destroyed.

Specialists also caution that ancient manuscripts and other precious objects stolen from Tigray could end up on the art market. “There are reports of looting of manuscripts from Tigrayan churches and monasteries, and warnings that they will sooner or later be taken out of Ethiopia to be sold at antiquities markets in other countries. It is beyond any doubt that the conflict is causing heavy damage to the cultural heritage, but since most communication lines remain cut off and the information coming from the region is minimal, it is difficult to assess the real scope of the losses,” a group of experts from the Hiob Ludolf Centre for Ethiopian and Eritrean Studies in Hamburg, Germany said in a public appeal in January.

They also warned that fighting is taking place close to important cultural sites, including the old city of Axum, some of which have been plundered and damaged. Axum, which is on Unesco’s World Heritage list, was once the centre of the ancient Aksumite Kingdom, the most powerful state between the Eastern Roman Empire and Persia. Aksumite monuments include obelisks dating from the third and fourth centuries AD, royal tombs, and palace ruins dating to the sixth and seventh centuries AD. After the introduction of Christianity in the fourth century AD, numerous churches were constructed in the region, including St Mary of Zion, which was subsequently rebuilt in the 17th century.

The conflict in Ethiopia has killed thousands and displaced many more who are now at risk of starvation. It began in early November, as the world’s attention was focused on the US presidential election, when the Ethiopian Prime Minister Abiy Ahmed sent forces to attack the Tigray People’s Liberation Front (TPLF), which ruled the country for three decades until Abiy took power in 2018. Eritrean troops joined the fight alongside Abiy’s soldiers purportedly to hunt down TPLF fighters.