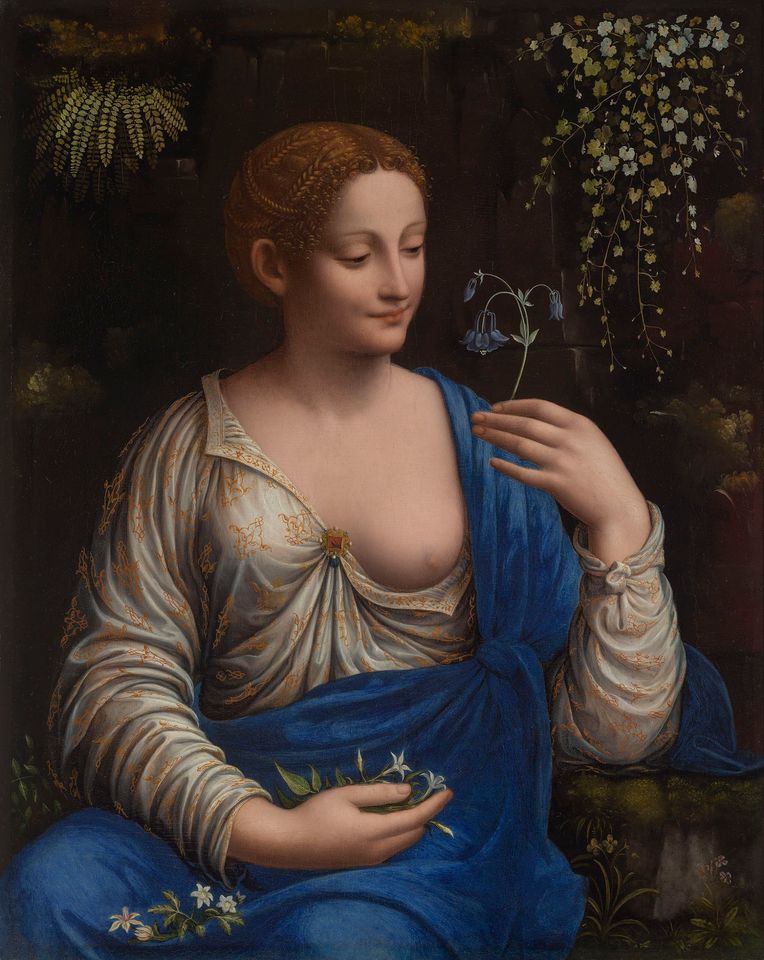 The National Gallery, London, has secured the loan of the recently restored Flora (around 1520) by Francesco Melzi from the State Hermitage, St Petersburg. The National Gallery and the Hermitage have exchanged works on several occasions in the past, and Geraldine Norman, the director of the Hermitage Foundation UK, approached the gallery to ask if it might be interested in arranging a Hermitage loan to coincide with the foundation’s annual banquet at the National Gallery. It was agreed that Melzi’s recently restored Flora would be not only seasonally appropriate, but also relevant to the Leonardo anniversary year. The painting will be centrepiece of National Gallery’s collection of works by the Leonardesque school (Room 12, 23 May-23 June).

Melzi was Leonardo’s favourite pupil, moved with him to France, attended his deathbed and inherited his drawings and manuscripts (now mostly in the Royal Collection and being shown in a series of national exhibitions in the Leonardo anniversary year). The painting will be on display for one month only. It was attributed to Leonardo for more than 100 years before it was bought by Tsar Nicholas I in 1850, but then underwent a series of re-attributions (Andrea Solario, Gianpietrino) until 1899 when it was attributed to Melzi, which is now the accepted attribution.

The painting depicts Flora, the goddess of springtime flowers and patroness of plants in Graeco-Roman antiquity. Melzi follows Leonardo’s female type of his Milanese period: a soft face with regular features, high forehead, even arched eyebrows and downcast gaze. A faint Mona-Lisa-like smile can be detected on her lips. The figure also recalls Leonardo in its soft translucent chiaroscuro modelling and restrained treatment of colour. Prior to restoration, the state of the painting was not a cause for concern, but the richness of colour was obscured by a thick layer of varnishes of various dates, heavily yellowed in places and opaque in others. The background details were practically indistinguishable and Flora’s cloak appeared flattened. The removal of the varnished revealed a very different colour scheme.

There are at least five 16th- or 17th-century copies of Flora in other collections, evidence of its fame as a Leonardo. “There is an obvious explanation for this”, according to Tatyana Kirillovna Kustodieva, the leading researcher in the State Hermitage’s Department of Western European Fine Art. “Artists referencing the work thought they were dealing with an original da Vinci. It’s hard to fault them in this view as the Hermitage painting is indeed very close to the great master’s work.” Dr Gabriele Finaldi, the Director of the National Gallery, said "We are delighted to be able to mark the 500th anniversary of Leonardo da Vinci’s death with a display presenting the exceptional loan of the recently restored Flora by Francesco Melzi from the State Hermitage Museum, St Petersburg… The State Hermitage Museum has longstanding and close ties to the National Gallery and this… display is a superb example of international museums working together in collaboration.”