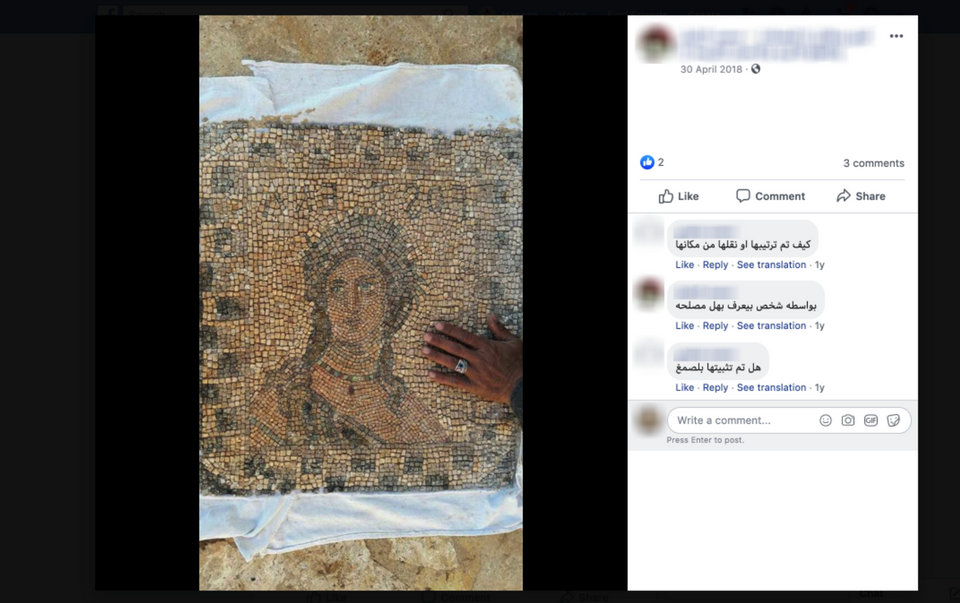 Facebook has banned the sale of historical artefacts following reports that the social media platform was being used to sell illegally excavated antiquities. Ongoing investigations by the heritage watchdog body Antiquities Trafficking and Heritage Anthropology Research Project (Athar) as well as the BBC have put pressure on the platform to change its policies. The new rules will also apply to Instagram, which Facebook owns.

The US-based organisation Athar published a report last year titled Facebook’s Black Market in Antiquities. According to the report, “traffickers are offering large artefacts, including mosaics, architectural elements and Pharaonic coffins—all still in situ. These individuals are finding buyers before they put in the effort to remove the objects”. A case study included in the report analysing Syrian-based Facebook groups ascertained that a third of all posts offering suspect artefacts came from users based in conflict zones.

In April, Athar found an uptick in posts on Facebook groups involved in buying and selling looted objects from the Middle East and North Africa as many countries went into lockdown in the wake of the coronavirus crisis (thieves looted objects from a mosque near Larache in Morocco and images of the crime were shared on Facebook trafficking groups).

Greg Mandel, Facebook's public policy manager, says in a statement: "To keep these artefacts and our users safe, we've been working to expand our rules, and starting today [23 June] we now prohibit the exchange, sale or purchase of all historical artefacts on Facebook and Instagram.”

The new guidelines include images of looted items that have been removed from the site such as Syrian tombstones and ancient Persian rugs offered for sale. Under the recommended policy review, a list of “pros and cons” highlights however that the “new policy and enforcement may drive trade underground”.

Athar tweeted that Facebook’s new policy on cultural policy “is a big first step to stop the trafficking of illicit antiquities… but there’s still much more to be done”. It added that “Facebook had been slow to admit the problem and lax in policing criminal activity online”.