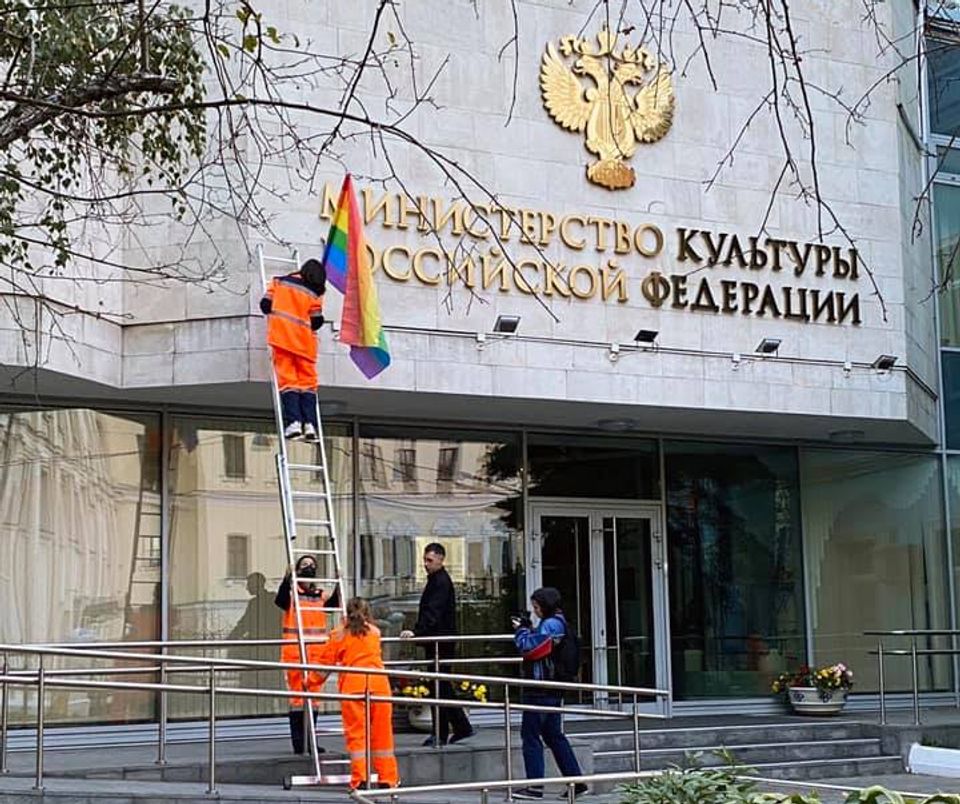 Five members of Pussy Riot, the feminist punk collective, were detained in Moscow after affixing rainbow flags to government buildings, including the FSB security service and the ministry of culture to protest against homophobia in Russia. The protest actions, stage on 7 October, were calculated to coincide with the birthday of President Vladimir Putin, who turned 68. His presidential administration building was also targeted.

Masha Alekhina, who spent nearly two year in prison after a protest performance against Putin at Moscow’s Christ the Savior Cathedral in 2012, was among those grabbed by police as she arrived for a television interview. Nika Nikulshina, who burst onto the football field wearing a police uniform during the 2018 World Cup final in the Russian capital attended by Putin, was also detained on Wednesday. A total of five activists were detained, according to a Tweet by Pyotr Verzilov, a spokesman for the group and publisher of the Mediazona prisoners’ rights website.

A manifesto posted on the collective’s Facebook page said that while Putin promised earlier this year that “there will never be any restrictions on the basis of orientation in Russia,” in fact “the government was killing gay people in Chechnya, passing transphobic laws (for [the purpose of] 'strengthening the institution of the family'), persecuting fathers of children born from surrogate mothers." The group adds: "To encourage people to vote for changes in the Constitution that allowed Putin to stay in power indefinitely, propaganda shared horrific homophobic videos aiming to convince our Russian citizens that staying in the same-sex family is worse than living in an orphanage for a kid."

Pussy Riot said the rainbow flags were "our gift to Putin as a symbol of missing love and freedom” for the LGBTQ community in Russia. They also made a list of demands including the investigation of the "killings and kidnapping of gay, lesbian, transgender and queer people in Chechnya”, an end to the harassment of activists and organisations that help the LGBTQ community”, to legalise same-sex partnerships and to stop taking away children from such families. And the activists suggested making Putin's birthday on 7 October an annual holiday—as LGBTQ Visibility Day.