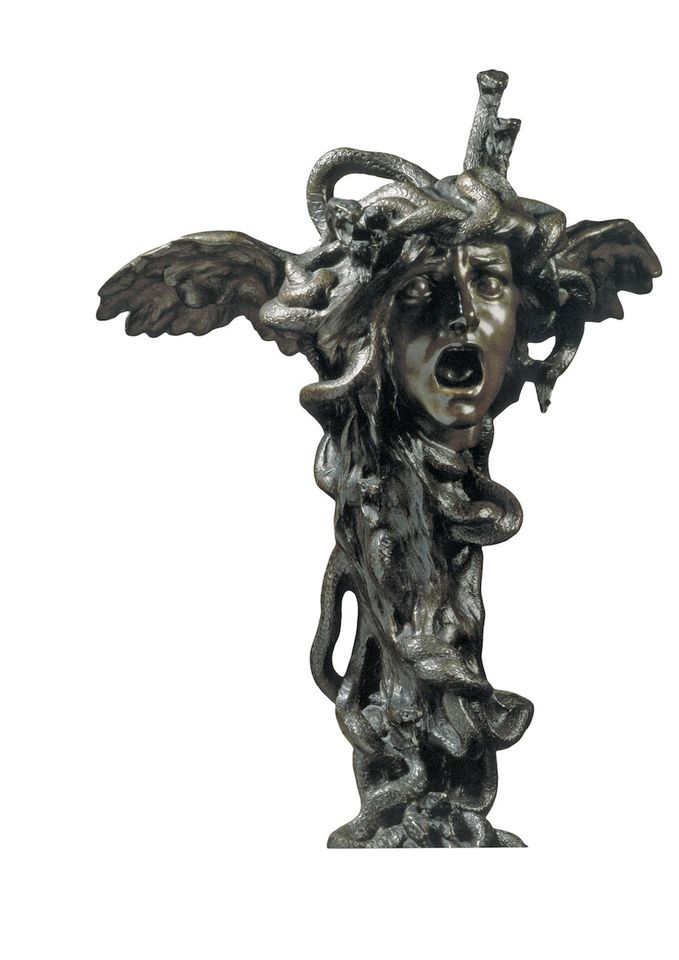 A former Belgian politician has reiterated her claim that a bronze sculpture by Fernand Khnopff, currently the centrepiece of a major exhibition of the Belgian artist’s work in Paris, is by another sculptor. The piece in question, Tête de Méduse, has been on long-term loan to the Royal Museums of Fine Arts of Belgium since 2007.

The work, which is believed to date from 1900, is on show in The Master of Enigma, Fernand Khnopff (1858-1921) at the Petit Palais (until 17 March). “It is clear that the sculptor of the Medusa is Giorgio Ceragioli [1861-1947],” says Marie-Paule Quix, a former member of the Parliament of the Brussels-Capital region.

The work comes from the collection of the Belgian aristocrats Anne-Marie and Roland Gillion-Crowet. The couple donated more than 200 Art Nouveau and Symbolist objects to the Brussels-Capital Region in 2006 in lieu of inheritance tax of €22m. Tête de Méduse was among five works later placed on long-term loan from the Gillion-Crowet holdings.

In 2007, Quix told Parliament, which scrutinised the Gillion-Crowet donation, that “specialists are questioning the work… which does not correspond historically with Khnopff’s style”, pointing to the misspelling of his name on the marble plinth (inscribed as Knopff). She believes that there is no historical evidence proving that this sculpture is a work by Khnopff.

“What is the meaning of specialists who want to remain anonymous?”

“A parliamentarian’s work is very similar to that of a journalist’s. You have to compile a dossier, to contact specialists, etc. That is what I did. Two specialists, who prefer to remain anonymous, told me that that there was a problem with Tête de Méduse,” says Quix, who is currently an adviser at the University of Antwerp.

Roland Gillion-Crowet tells The Art Newspaper: “I confirm that we acquired this work of Fernand Khnopff [in the early 1970s] from a dentist in Ghent. There is absolutely no doubt about its provenance and authenticity.” The work was described as by Khnopff in the magazine Plaisir de France in December 1972, he adds.

Michel Draguet, the co-curator of the Paris exhibition and the director of the Royal Museums of Fine Arts of Belgium, says: “What is the meaning of specialists who want to remain anonymous? I don’t think they are specialists of Khnopff. I’m working on this issue, and I’ll publish my own conclusions shortly.”

Tête de Méduse was included in a show of Khnopff’s work held at the Royal Museums of Fine Arts, Brussels, in 2004, says Dominique Morel, the co-curator of the Paris exhibition. Moreover, the work is also included in the catalogue raisonné dedicated to Khnopff, which was published in 1979. According to the publication, the work comes from the collection of the late Belgian dealer and collector Max Berkovitch.

Gisèle Ollinger-Zinque, a co-author of the catalogue raisonné, says that Draguet sought her opinion on the work in 2006. “He wanted to exhibit the piece and was aware of observations about the possible authenticity of the work”. In correspondence addressed to Draguet the same year, which has been seen by The Art Newspaper, she outlines why she believes the piece is by Khnopff. She references in particular a 1906 academic journal article by Maria Sarfatti entitled Profili d’Artisti, Fernand Khnopff. Sarfatti describes the sculpture, explaining how the Medusa motif is linked to works seen by Khnopff at the Louvre.

Ollinger-Zinque says she stands by her decision to identify the piece as a Khnopff work because “the work is referred to by Sarfatti in 1906 during the artist’s lifetime. Even if Sarfatti does not explicitly mention the sculpture, she discusses a ‘Khnopff sculpture’ just before she launches into a discussion about the theme of Medusa.”