Four artists to see at the São Paulo biennial

As the country faces political chaos, the long-running exhibition finds a patch of order with a garden theme

When the title of this year’s Bienal de São Paulo, Live Uncertainty, was announced over a year ago, nothing seemed more fitting. Brazil was reeling from the seismic protests of 2013 that started over public transport and experiencing the first hiccups of a political storm that would climax with the removal of president Dilma Rousseff from office just days before the show was slated to open on 7 September—the country’s Independence Day.

The country’s political tumult can perhaps be seen in the reference to earthquakes, tsunamis and other violent phenomena in many of the works on display. But the curator Jochen Volz and his team have given some order to the natural chaos, by designing a layout for the exhibition that follows the plan of a garden.

“In a garden, no one seems to worry that a patch of rocks is much smaller than a bamboo forest,” Volz says. “When you think of an exhibition organised following an urban logic, some things are much bigger than others, one will have a whole city square and the other just a corner. We will have more compact densities contrasting with more open fields, taller and shorter trees.”

Here are some of the flowers, trees and shrubs you should not miss when visiting the 32nd edition of the Bienal de São Paulo:

Lais Myrrha Known for her critical assessment of the failure of the Modernist utopia in Brazil, the artist takes over the most privileged spot in Oscar Niemeyer’s pavilion with two monumental towers, one made with bricks and steel rods and the other with dirt and vegetable fibres. Her massive installation, in tune with a series of works in the show, seems to act like a parasite on the sleek curves and sweeping open spaces of the Modern building, laying bare how the Brazilian avant-garde tried to erase the legacy of indigenous culture. 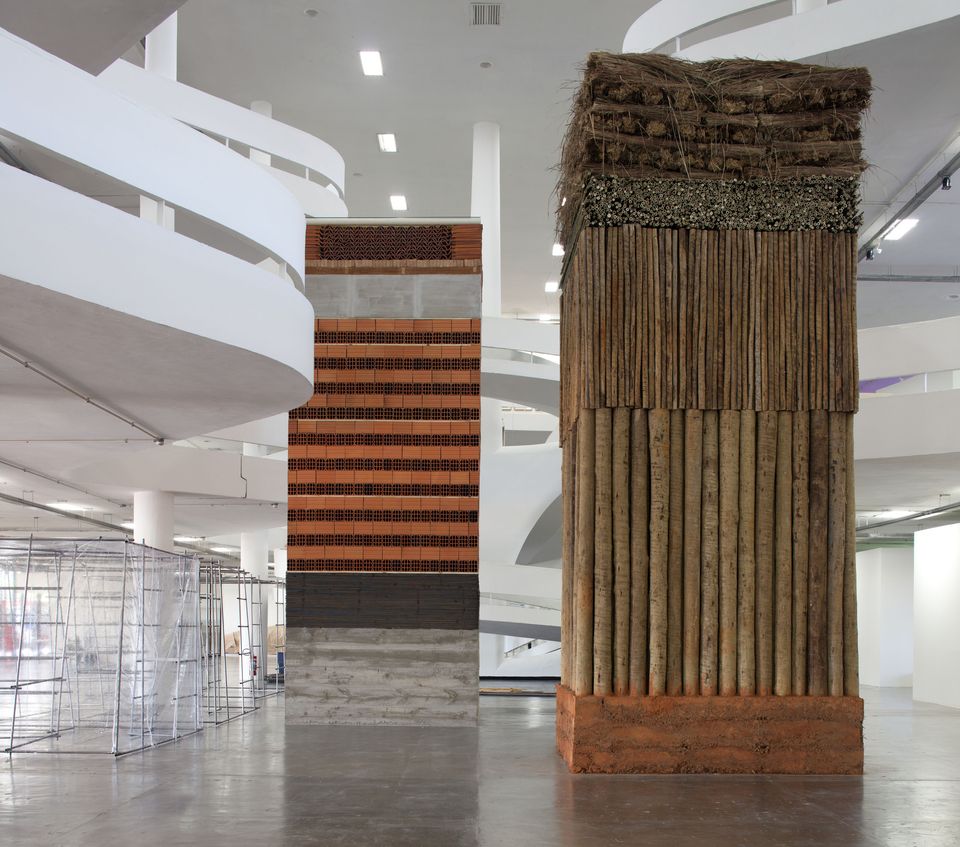 Hito Steyerl Using the most recurring words in pop music from the last decade, the German artist creates strange panels that seem to scream “hell”, “yeah”, “we”, “fuck” and “die”. Her installation also shows videos about new robots that seem more intelligent than humans and mechanisms used to monitor dangerous living conditions in zones of conflict. Steyerl here contrasts the menace of the real world with the aggressive lyrics that pervade today’s pop culture landscape. 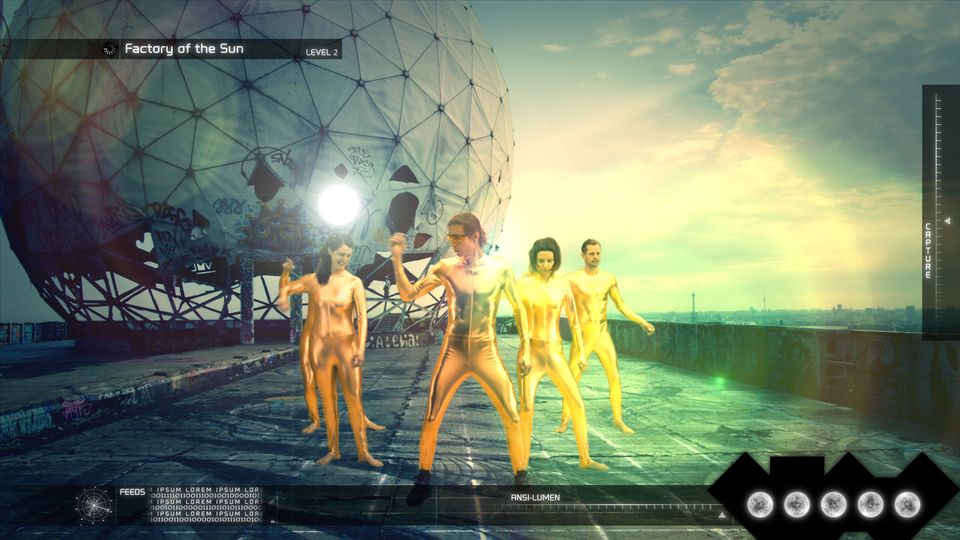 Rachel Rose The American artist has two videos in the show. On the ground floor, a lovely day at the beach suddenly turns into a nightmare as a hailstorm pummels unwary bathers. This found footage is interspersed with a vision of the architect Philip Johnson parading around his Glass House as he explains how its dimensions were based on the human body. Upstairs, Rose projects her dialogue with an astronaut who recently flew back to Earth on a translucent screen, giving the viewer a glimpse of the park outside. In a way, Niemeyer’s pavilion becomes a sci-fi abstraction. 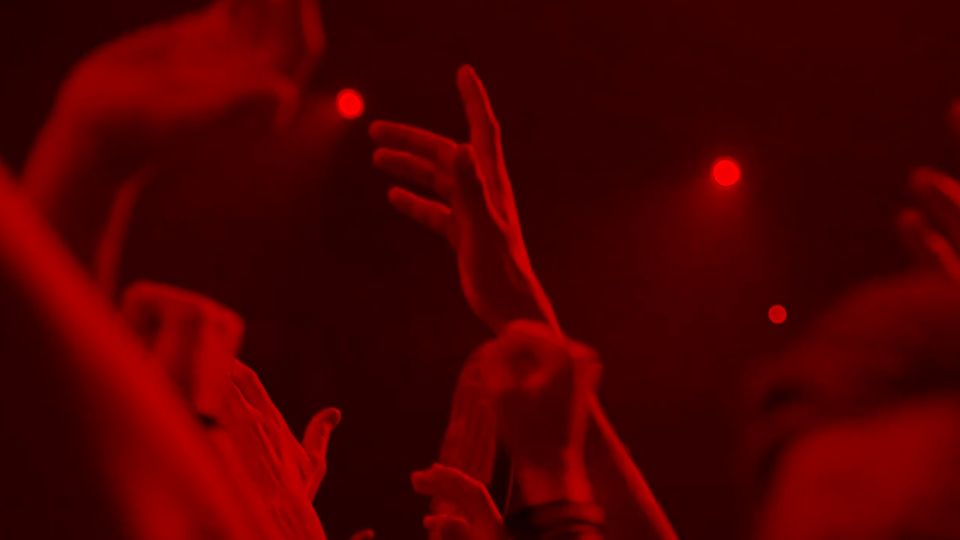 Alia Farid Reminiscent of Rachel Rose’s fusion with the surrounding environment, the Kuwaiti artist’s film shows a woman wandering around Oscar Niemeyer’s International Fair in Tripoli, Lebanon’s northernmost city on the border with Syria. Those Modernist ruins, now caught in the tangles of yet another war, are brought back to São Paulo’s Ibirapuera park, designed with a strikingly similar plan. 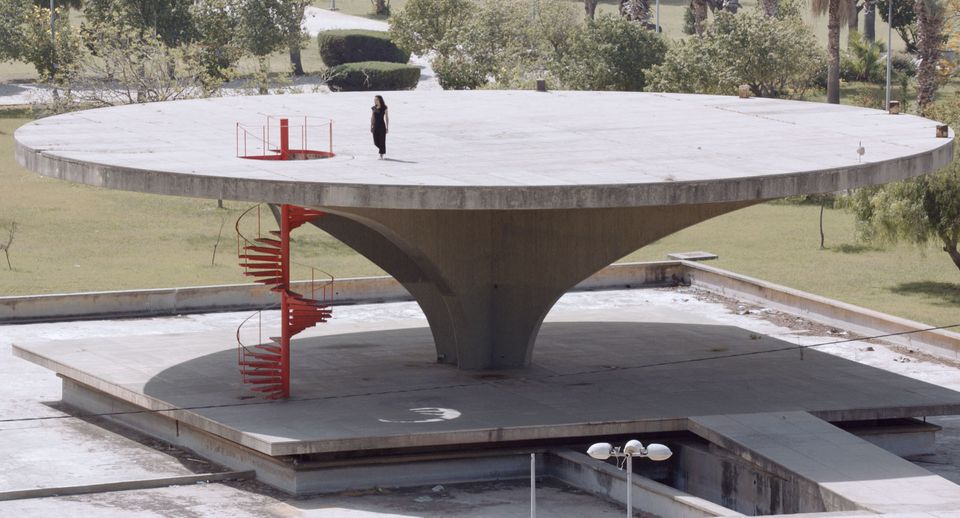