Legal case brought against antiquities expert who also sold an allegedly looted golden sarcophagus to the Metropolitan Museum last year, while an arrest is made in Germany 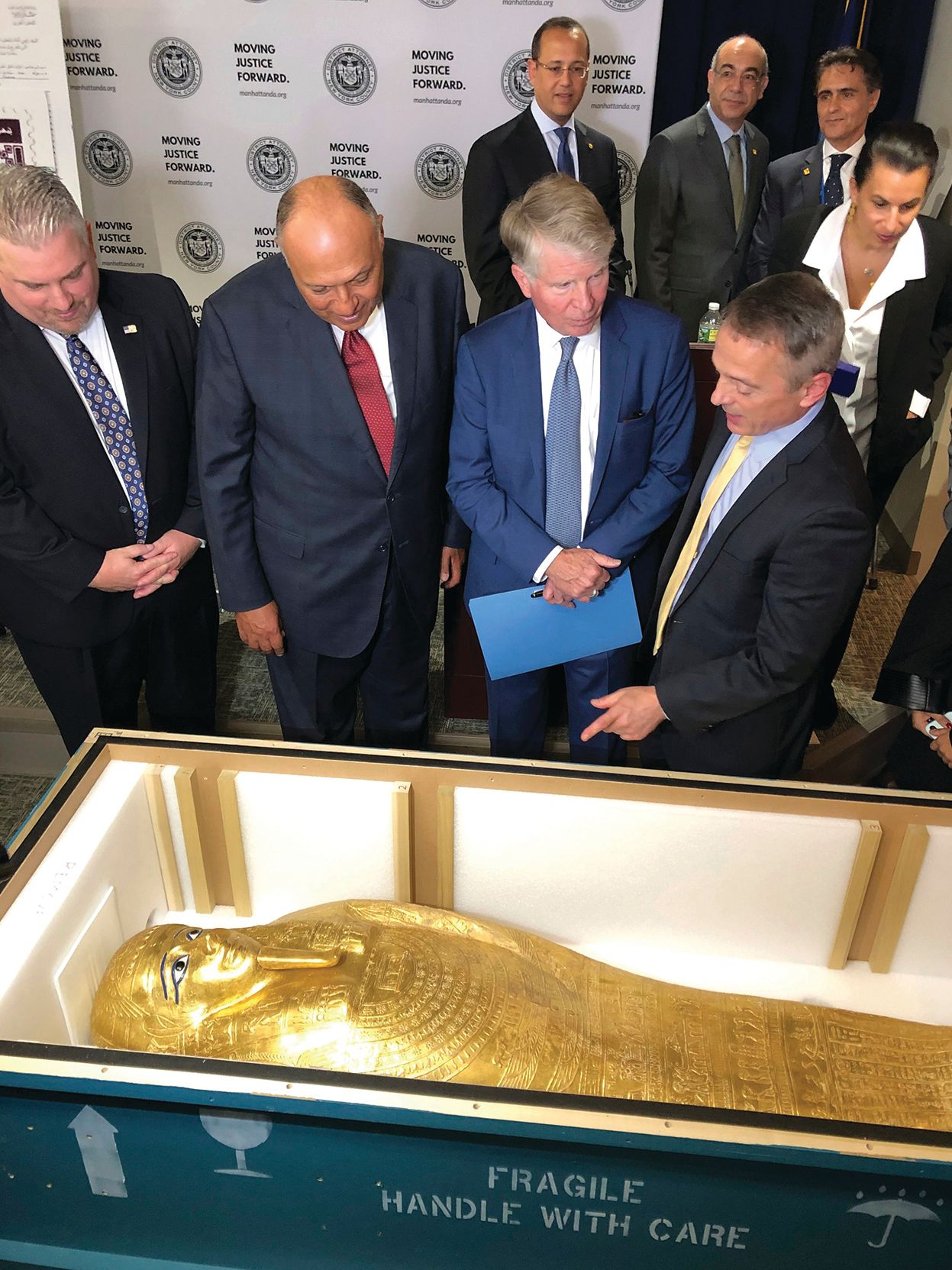 The Parisian gallery Cybèle is seeking reimbursement for an Egyptian stele that was seized last year in New York as part of a wide-ranging investigation into antiquities trafficking. The gallery is suing the Hamburg-based seller Nassifa el-Khoury, as well as the French auction house Pierre Bergé and its expert Christophe Kunicki, in a bid to obtain a refund for the €126,700 paid for the piece in 2016, and some €80,000 in damages.

The 110cm-long funerary stele from the Late Period (around 664BC-332BC) is dedicated to a Hathor temple priest, depicted with Osiris, Horus and Hathor. The gallery, which had previously exhibited the work at Tefaf New York in 2018, shipped it to the same fair in October 2019. Blocked by US authorities on Long Island, however, the artefact never made it to the event. The district attorney (DA), Cyrus Vance, claimed at the time that the stele “was illegally removed from Egypt by members of an international antiquities trafficking organisation”, a group that had been investigated by Matthew Bogdanos from the DA’s office since 2013.

After “having viewed the evidence”, Jean-Pierre Montesinos, the owner of Cybèle gallery, signed an agreement with the DA’s office waiving all claims to the object, which is now due to return to Egypt. The DA praised his “good faith”.

“It appears that Christophe Kunicki knowingly provided a false provenance in his catalogue,” according to Cybèle gallery’s lawsuit in Paris. The catalogue states that the stele belonged to a German collector who acquired it in 1970 along with the stock of the late Cairo dealer Habib Tawadros. The collector appears to be California-based Simon Simonian, 83, a dealer active in Cairo from 1969 to 1984. He tells The Art Newspaper that El-Khoury was acting on his behalf and that he believes the stele should be returned to him.

Sill, Bogdanos asserts in his report that “this provenance is patently false. Demonstrably false. Criminally false,” pointing out that Kunicki provided the same origin for a golden sarcophagus that he sold to New York’s Metropolitan Museum of Art in 2017 for €3.5m. Allegedly looted in 2011, the sarcophagus was seized and repatriated last year, with apologies from the museum after the DA’s investigation exposed serious flaws in the Egyptian department’s provenance check.

Separately, Kunicki and his husband and associate Richard Semper were arrested and charged with gang fraud and money laundering in Paris in June. French authorities are investigating 29 pieces—including the stele—that were auctioned in Paris since 2007 for more than €4.3m. The two most expensive pieces were bought by the Metropolitan Museum, a Fayum portrait of a lady (€1.4m in 2013) and five fragments of paintings from the Book of Exodus (€1.2m in 2013). The museum also bought a stele representing a singer in front of an offering table to Hathor for €62,000 in 2015. It was consigned to the auction house by the same Nassifa El-Khoury while the two previous lots came from her son, Roben Dib. Dib’s family, including his mother and wife, appear 14 times as sellers of the 29 lots, along with a Lebanese dealer based in Dubai and a London gallery. 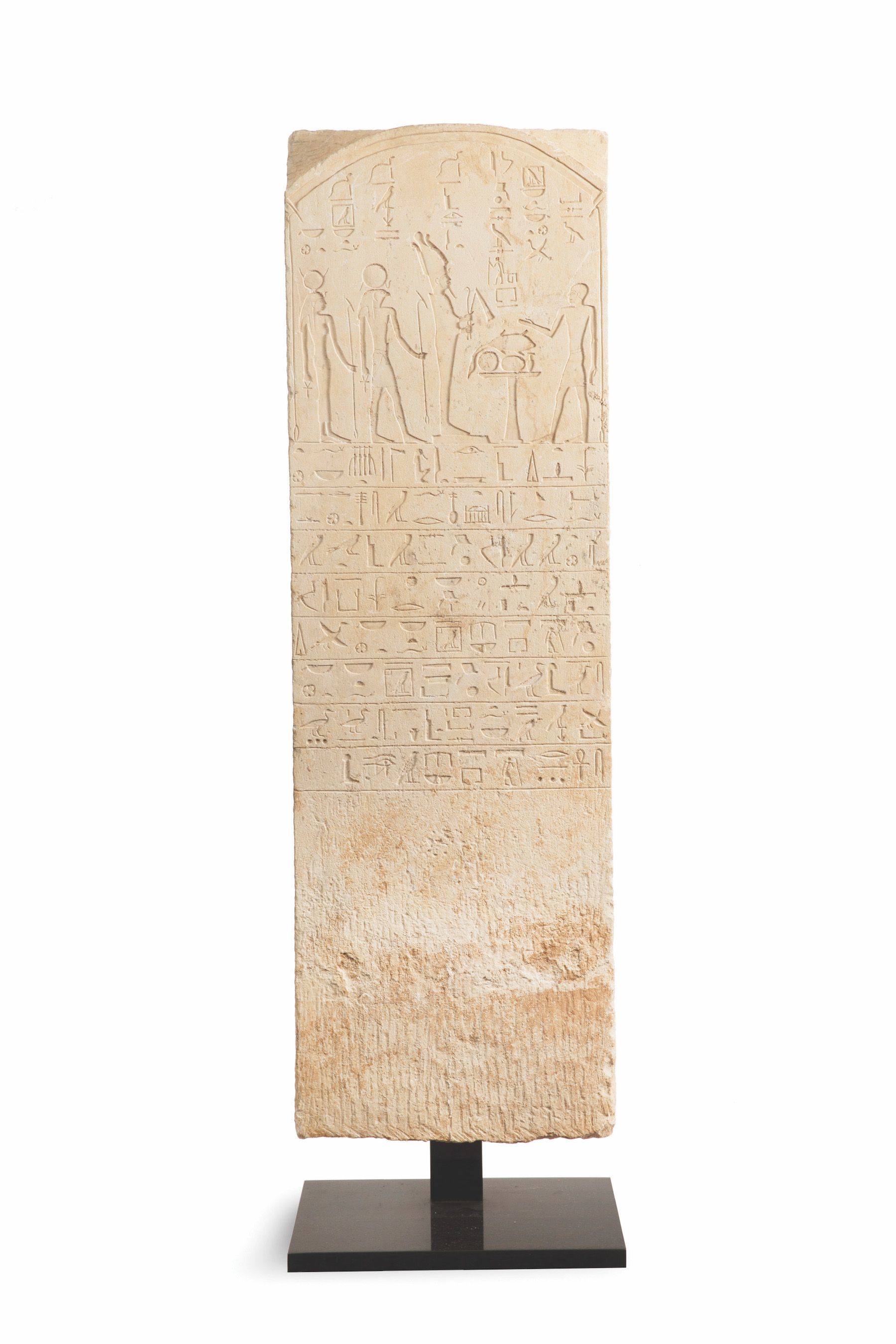 The stele, which was seized last year by authorities in New York © Pierre Bergé & Associés

Dib is the manager of a gallery in Hamburg called Dionysos, which is owned by Simonian’s brother, Serop. On 8 July, Simon Simonian confirmed by email to French police that he had “officially exported” the stele in 1970 under the export license number 1067. But according to Bogdanos’s report, the Egyptian Department of Heritage denies the existence of such a licence number (Dib says he doubts that the department has proper archives from the time).

Bogdanos’s report further alleges that after several exchanges between Dib, Kunicki and Serop Simonian, a photograph of the stele, unrestored and broken in the middle, appeared in an email to Dib in 2015. On the basis of “hundreds of emails and thousands of images and videos” from the trio, Bogdanos says that “Dib appears to have generally consulted Kunicki about whether to purchase an object”. He continues: “The pieces were then smuggled out of their country of origin before being transported to Germany, often through Dubai.” Once there they were restored and allegedly given false provenances and ownership histories. “Dib sold newly laundered antiquities through Kunicki or the auction house where Kunicki worked, Pierre Bergé.”

Kunicki declined to provide a comment to The Art Newspaper, but Dib said last month that he firmly believes in his “complete innocence”. The US reports are “a tissue of lies, no document has ever been forged”, he told us. “Simon Simonian might have had 2,000 objects in his stock, which were sold to museums and collections all over the world, and he now fears that all of these acquisitions might be under threat by Bogdanos’s witch hunt.”

A spokesman for Dib and the Simonians tells The Art Newspaper that they “deny all allegations in the two reports; the stele and the coffin were legally exported in 1970 and 1971, as proved by genuine export licenses”.

Dib said last month that the trial in Paris will be “very important, because none of us could defend ourselves” in this investigation, stressing that neither he nor Simon Simonian have “ever been questioned by German or Californian authorities”.

The Met said in a statement that it has committed itself to “pursue claims against all parties that may have been involved in deceiving the museum”. But it did not specify whether it had checked the provenance of the three items investigated in the Paris auction sales or contacted the authorities in New York, Paris and Cairo about them.

Meanwhile, Antoine Godeau, the head of the Pierre Bergé auction house, has offered “full co-operation” with the criminal investigation, given that his company “was among the victims” of the alleged actions that have been uncovered in the New York reports.

In the latest turn of events, according to official sources, Dib was jailed in Hamburg at the end of August. On Thursday, a spokeswoman from the public prosecutor's office said that “a suspect has been detained and several search warrants were carried out in connection with the trade of antiques from the Middle East”. The spokeswoman added that “various pieces of evidence were seized, which are now to be evaluated”, declining to give more details because “the two preliminary investigations targeting Serop Simonian and Roben Dib, conducted by local authorities and the federal criminal police, are still ongoing”.