Evocative surprises await: while its Gilded Age home is closed for renovation and expansion, the Frick displays its masterworks in austere Modernist surroundings on Madison Avenue 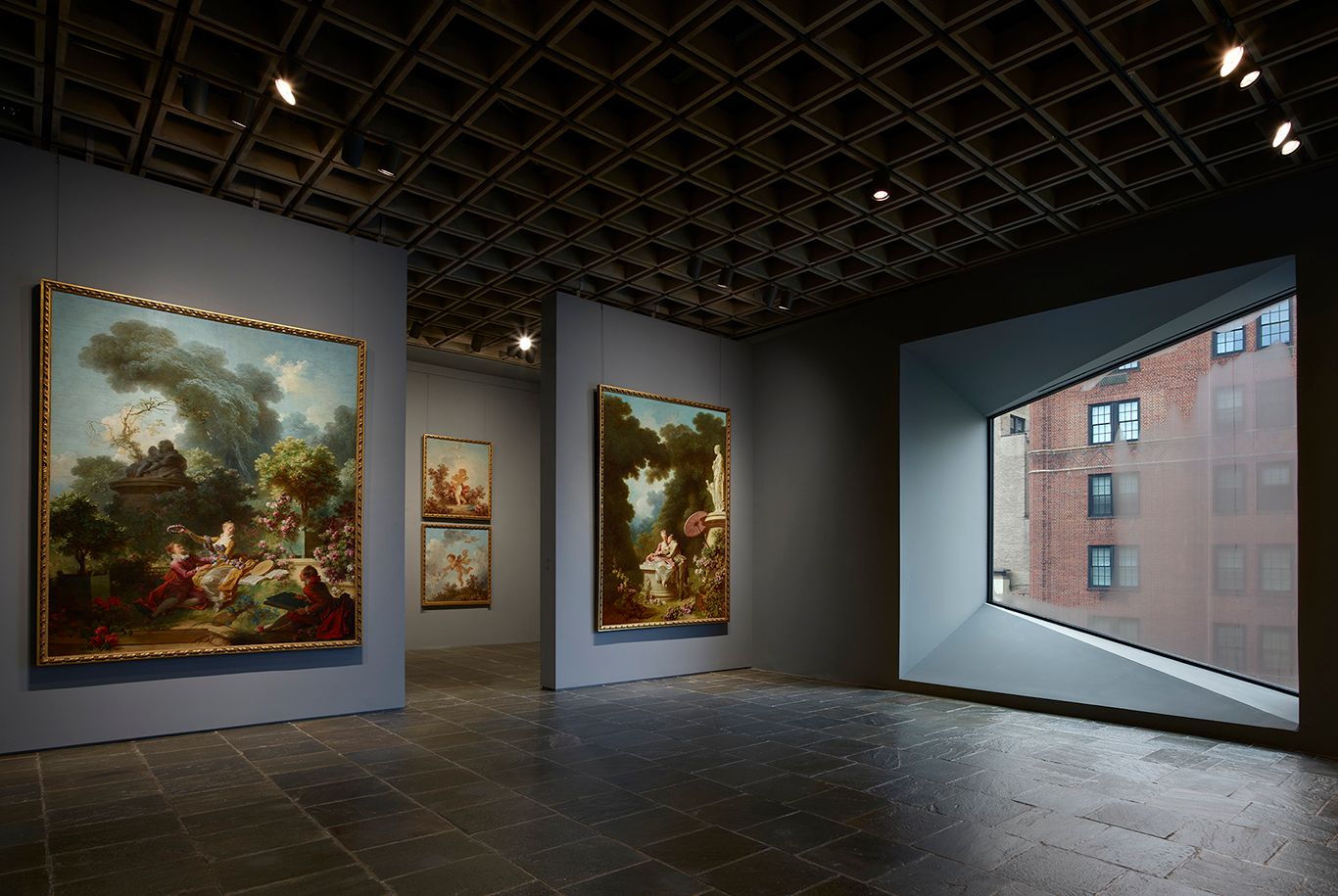 Four panels of Fragonard's 1771-72 The Progress of Love series at the Frick Madison The Frick Collection; photo: Joe Coscia

Before the Frick Collection closed last year for a $160m renovation and expansion, its European paintings, sculpture and decorative arts had largely remained where the industrialist Henry Clay Frick first placed them in 1915 in his sumptuous East 70th Street mansion. Now stripped from their Gilded Age surroundings, highlights of the museum’s collection are going on view for the next two years a few blocks uptown on Madison Avenue at the Whitney Museum of American Art’s former home (most recently occupied by the Met Breuer).

Rather than attempt to replicate Frick’s domestic tableaux densely arrayed with paintings, bronzes, furniture, enamels, clocks, porcelain and carpets, the museum’s leadership is embracing the austere Modernist framing of the Brutalist-style building designed by Marcel Breuer in the 1960s for the Whitney at what is now being called Frick Madison. 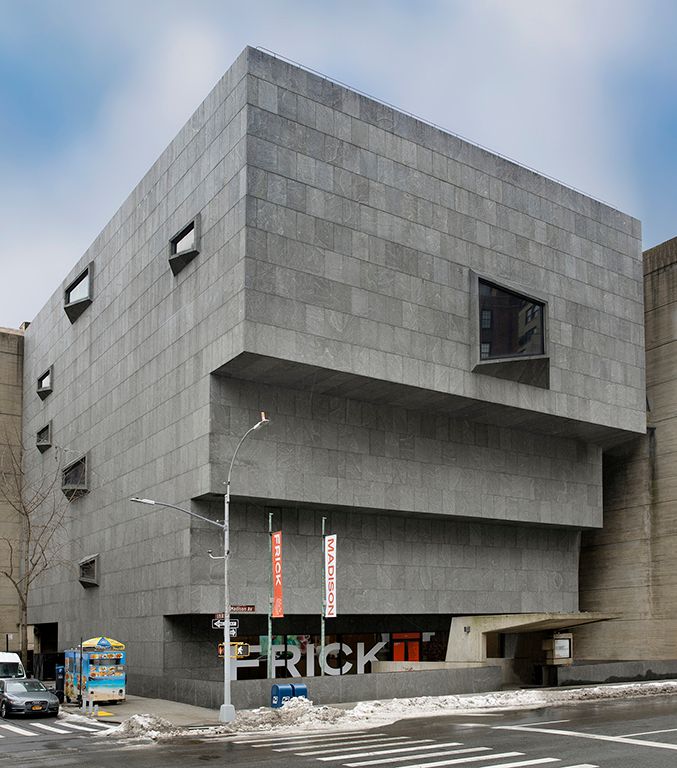 The Frick Madison, a 1966 Brutalist building whose interior has been transformed into a showplace for a Gilded Age magnate's treasures The Frick Collection; photo by Joe Coscia

“How do you take this opportunity to see the Frick in a way that you’re never going to be able to see it again?” asks the deputy director and chief curator Xavier Salomon, who has led the plan for the new installation, opening on 18 March. The hope is to jolt visitors into invigorating encounters with works of art that have long been associated with an august and rarefied atmosphere.

“A lot of the exercise at Frick Madison is to deconstruct what’s happening at the Frick in the house,” Salomon says. The 470 objects typically on display have been pared down to just over half of that and are grouped for the first time by region, media and chronology. “Everything is hung in a very spartan and simple way,” he says, “and there’s absolutely nothing that reminds you of the Frick in terms of the opulence and wealth of that interior.”

On the Frick Madison’s second floor, spotlighting Northern European paintings from Germany, Flanders and the Netherlands, single-artist galleries will be devoted to Vermeer, Rembrandt and Van Dyck, placing paintings that had previously been spread out across the mansion in close conversation. The room with three of the world’s 34 known Vermeers brackets Frick’s collecting practice: Officer and Laughing Girl (around 1657) is the earliest important Old Master work that the collector acquired while he was still in Pittsburgh and Mistress and Maid (1666-67) is the very last painting he bought before he died in 1919. 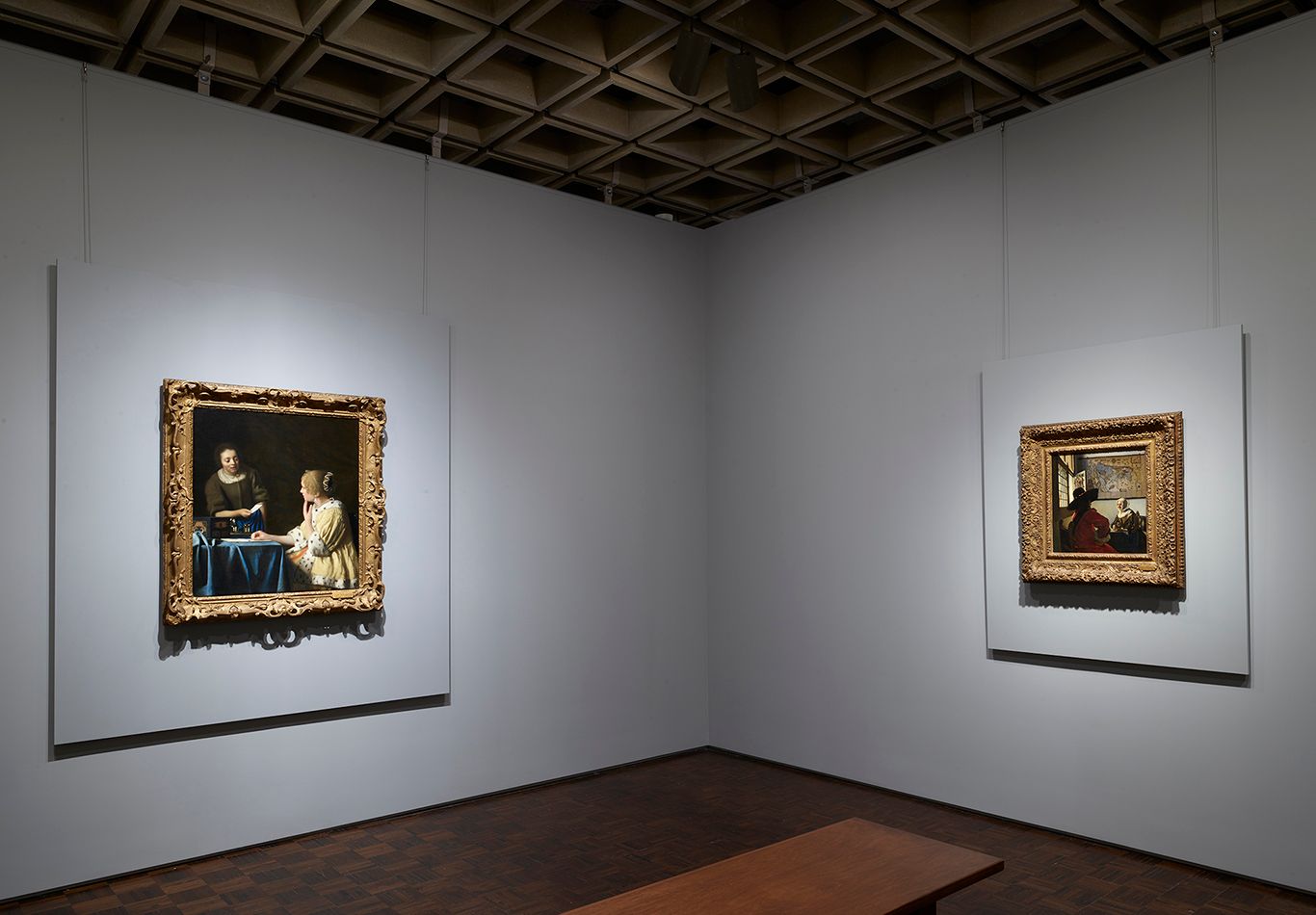 Vermeer's Mistress and Maid, left, from around 1666-67, and Officer and Laughing Girl, from around 1657, at the Frick Madison The Frick Collection; photo: Joe Coscia

There’s absolutely nothing that reminds you of the Frick in terms of the opulence and wealth Xavier Salomon, deputy director, Frick

The third floor focuses on paintings from Italy and Spain, with the Frick’s three El Grecos, four Goyas, one Velázquez and one Murillo all grouped together in a Spanish gallery for the first time. Bellini’s St. Francis in the Desert (around 1476-78), perhaps the museum’s most beloved canvas, gets its own chapel-like treatment, hung alone on the wall to the right of one of the building’s signature trapezoidal windows. 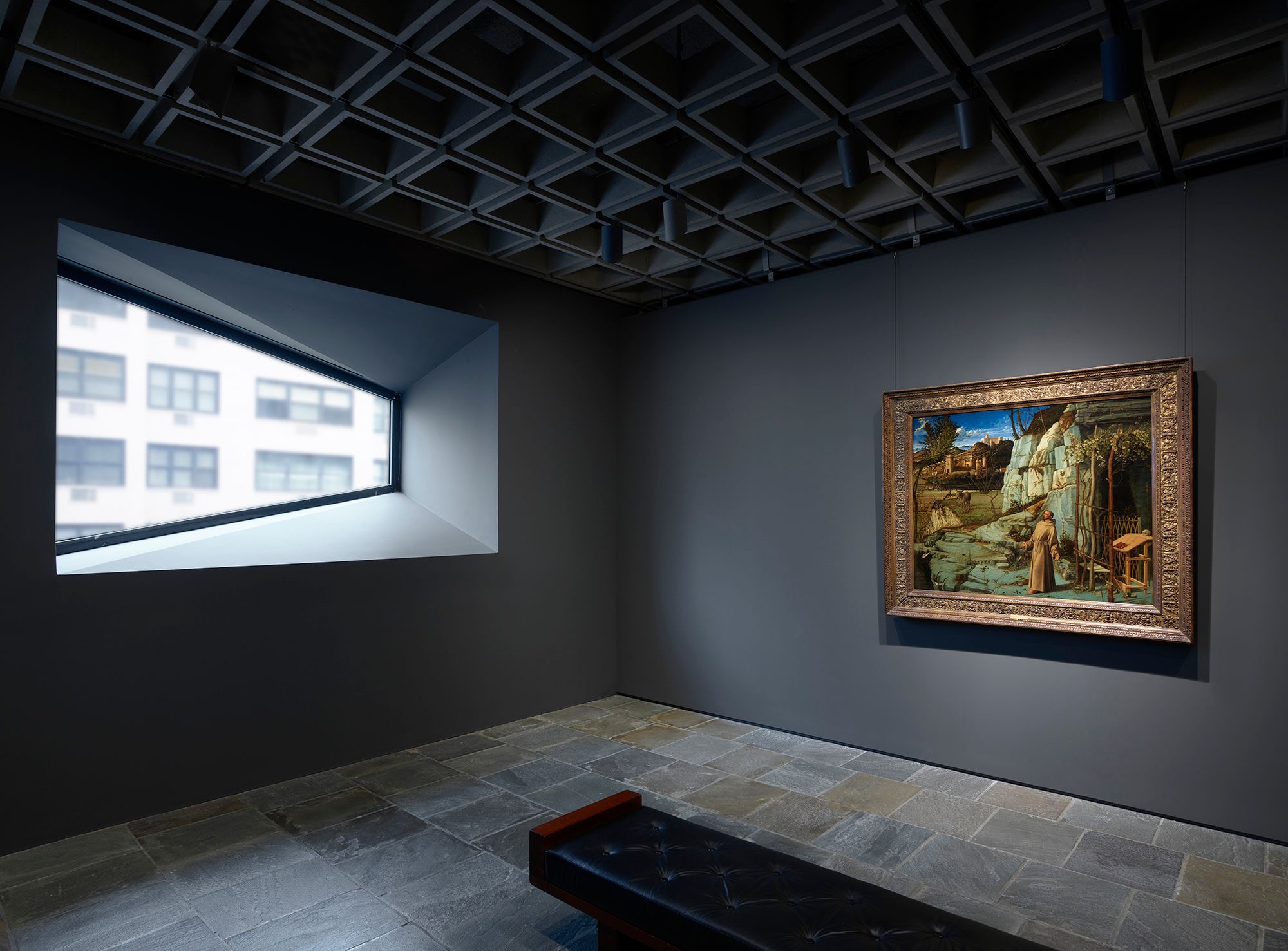 Bellini's St. Francis in the Desert, from around 1476–78, divorced from its usual context at the Frick Madison The Frick Collection; photo: Joe Coscia

“St. Francis is sort of looking out at the window,” says Salomon, who likes playing with how the divine light in the painting merges with the source of actual light in the room. 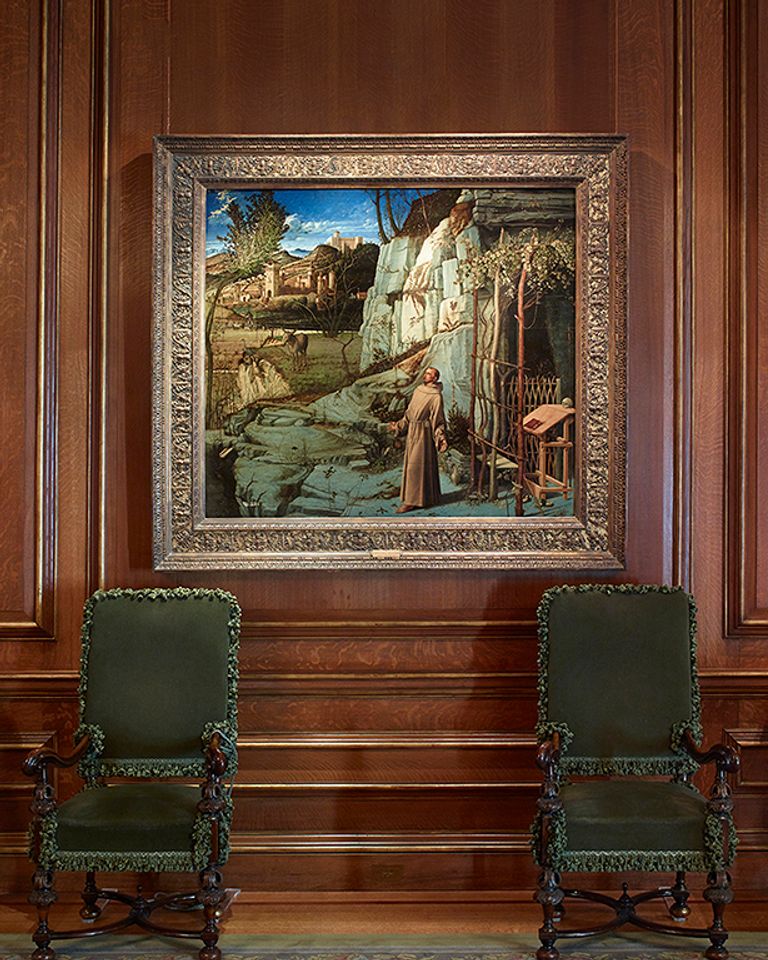 Bellini's St. Francis in the Desert in its longtime setting at the Frick mansion on East 70th Street The Frick Collection; photo: Michael Bodycomb 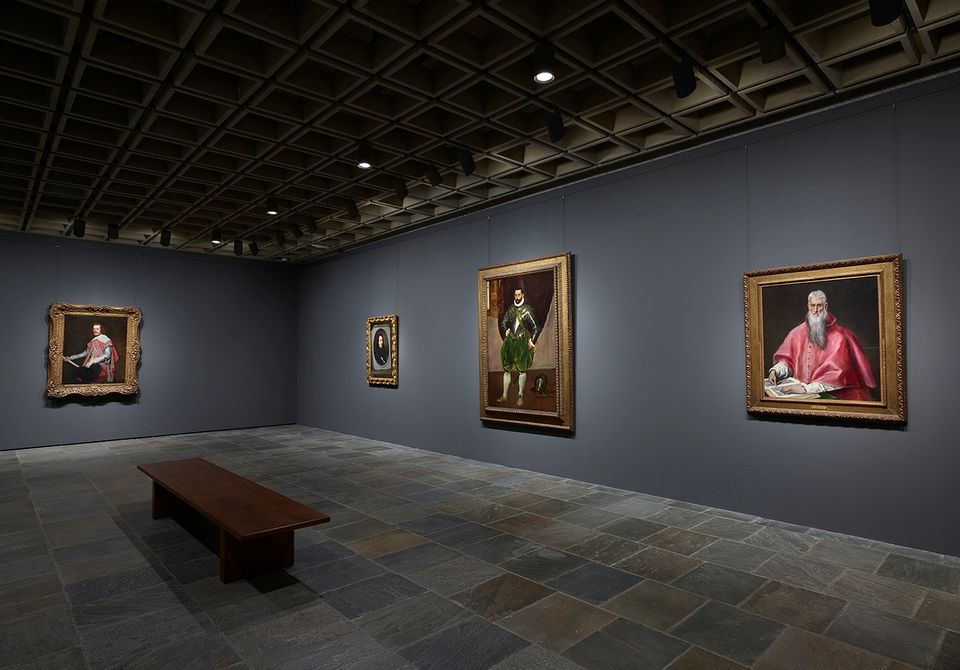 On the right wall, paintings by Murillo and El Greco; at the rear, a work by Velázquez The Frick Collection; photo: Joe Coscia

A gallery dedicated to the Frick’s Renaissance statuettes, reliefs and medals is intended to focus attention on the importance of the bronze collection. “The bronzes at the Frick are all over every surface and piece of furniture you can think of, which is why people often don’t notice them,” Salomon says.

Likewise, the porcelain collection is packed into a single gallery, mixing Asian and European ceramics on shelves that stretch almost from floor to ceiling. The groupings are arranged by colour, such as pinks, blues, reds and golds—a common way of displaying porcelain in the 18th century, according to the Frick’s director, Ian Wardropper. “It’s an Old World approach that, funnily enough, seems quite contemporary and radical right now,” he says. 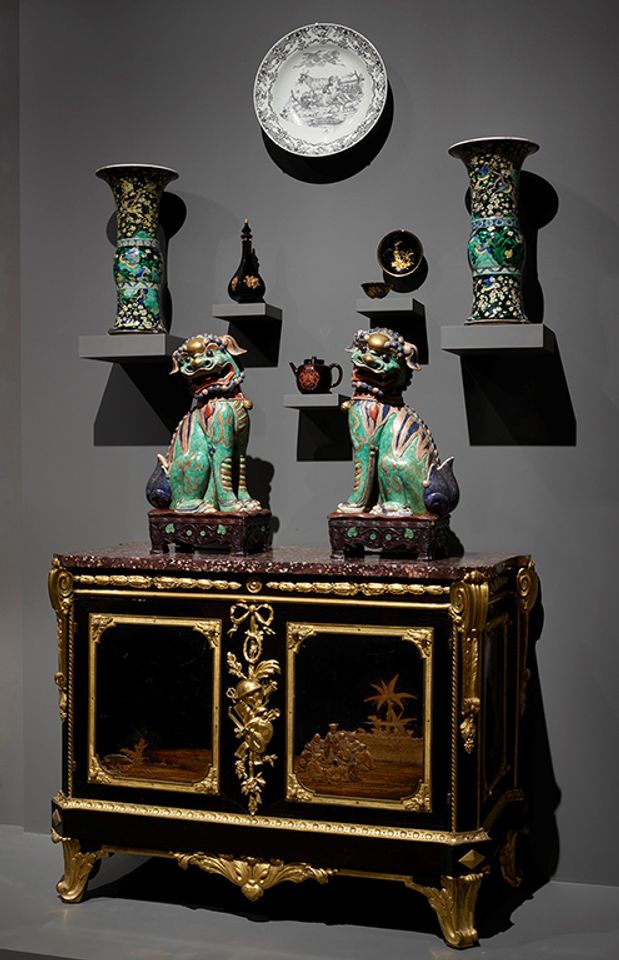 A porcelain display in a third-floor gallery at the Frick Madison The Frick Collection; photo: Joe Coscia

Among the French and British objects on the fourth floor, four pieces of 18th-century French furniture are displayed in isolation, including a Pierre Gouthière table. (In the mansion, it normally rests under an Ingres painting, which tends to steal the limelight.) A large central gallery of British portraiture gathers all seven of the Frick’s Gainsboroughs together for the first time, with a sight line into a Whistler gallery juxtaposing portraits of women from a century later. 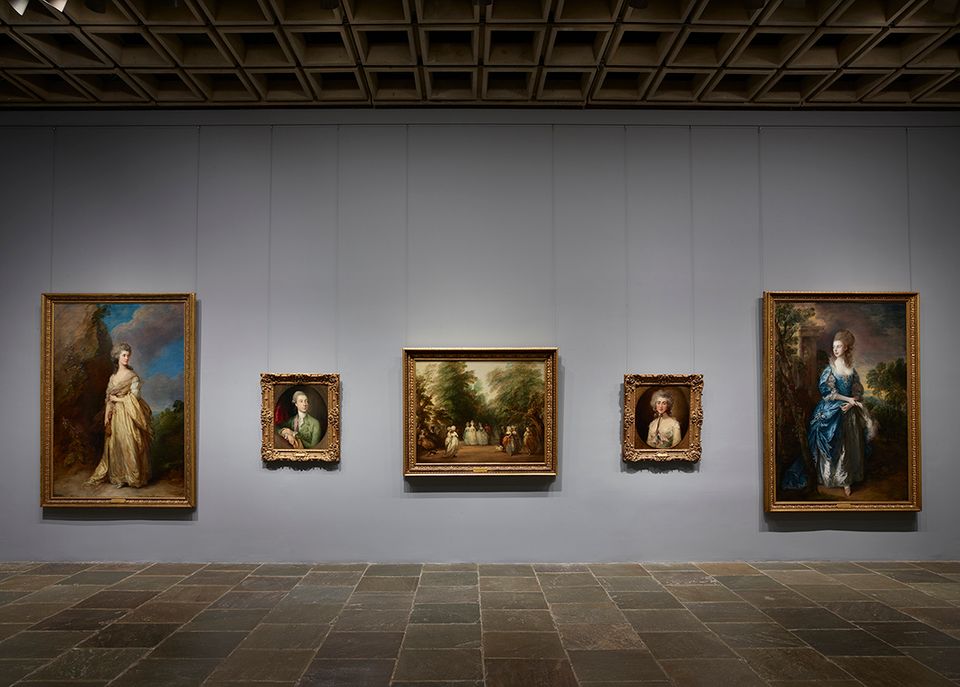 An arrangement of Gainsborough works at the Frick Madison The Frick Collection; photo: Joe Coscia

A view in another direction will draw the focus towards the Breuer’s largest trapezoidal window overlooking Madison Avenue, around which are arrayed Fragonard’s first four monumental paintings in the Progress of Love cycle from the early 1770s. A connecting gallery shows ten further canvases in the series painted 20 years later—three of which never fitted into the Fragonard room at the mansion. “We’ve deconstructed the Fragonard room to show it was actually created in two phases,” Salomon says. 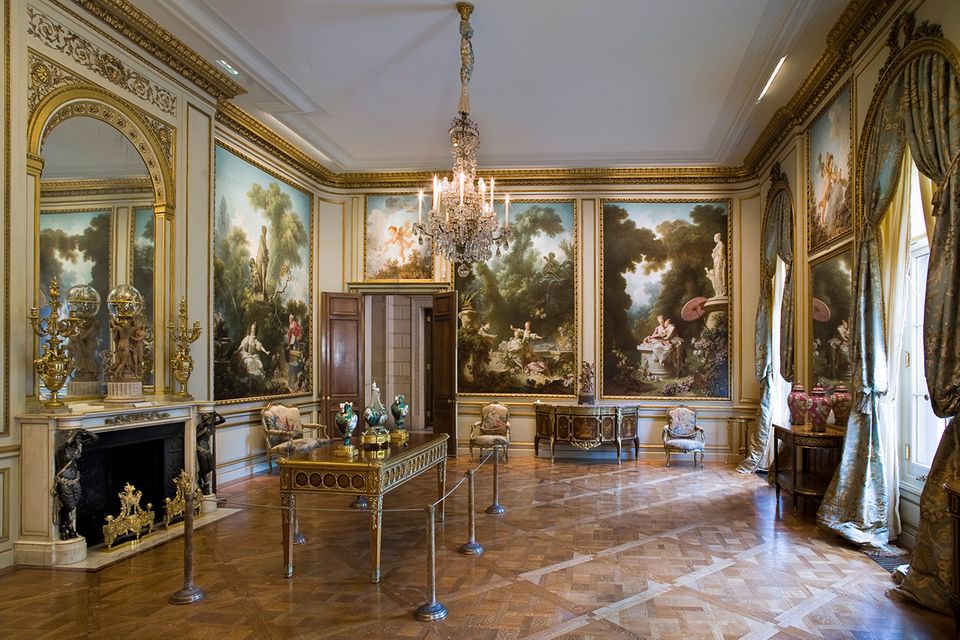 The budget for the move to Frick Madison is confidential. “It costs more to take over the Whitney building than if we had just rented office space and storage space for the collection,” Wardropper says, “but to offset that we’re going to have some revenue from ticket sales.” More importantly, though, Frick Madison allows the museum to continue its mission of making the collection accessible while the mansion is being remodelled and in a way that Wardropper anticipates may build new audiences among a younger cohort used to going to the Whitney and Met Breuer.

“The pictures look great, but they look very different,” he says. “That’s going to make people think about the collection in a different way but at the same time, I hope, value what its permanent home gives it. The collection is married to the house in a very unique way.”

• See more images from inside the Frick Madison here. Hear Xavier Salomon, the deputy director and chief curator of the Frick, talk about the new display on our podcast