From the archive, 1 October 1990: 'We did not pursue any party political nonsense on the Museum Island'

On the 25th anniversary of German reunification, we republish our first ever front-page story, in which East Berlin museums chief Günter Schade defends his record and reveals how East German museums sold in order to buy 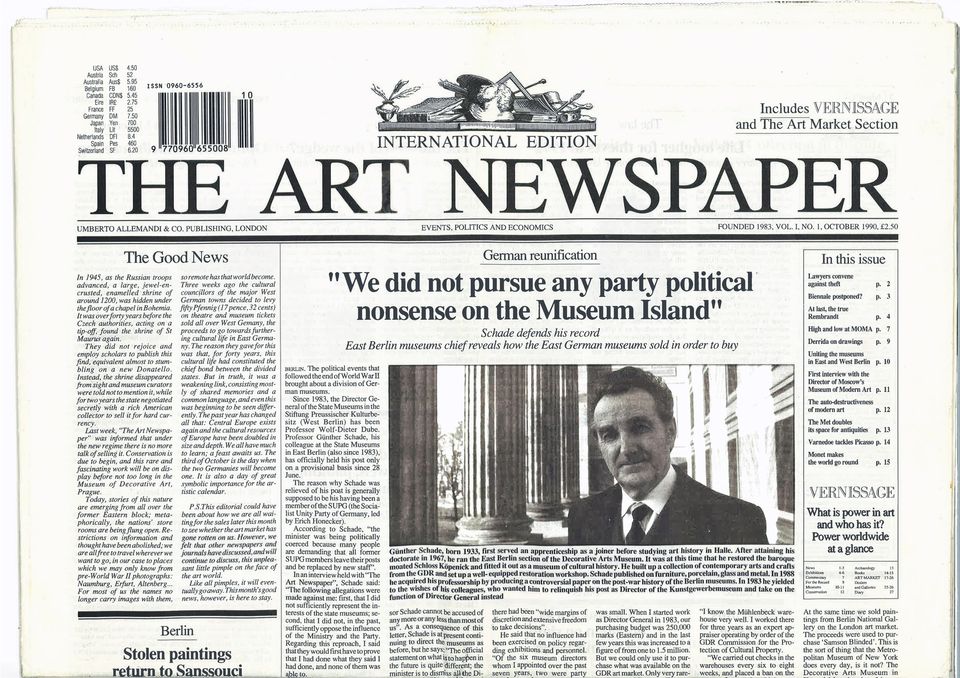 The political events that followed the end of World War II brought about a division of German museums.

Since 1983, the Director General of the State Museums in the Stiftung Preussischer Kulturbesitz (West Berlin) has been Professor Wolf-Dieter Dube. Professor Günter Schade, his colleague at the State Museums in East Berlin (also since 1983), has officially held his post only on a provisional basis since 28 June.

The reason why Schade was relieved of his post is generally supposed to be his having been a member of the SUPG (the Socialist Unity Party of Germany, led by Erich Honecker).

According to Schade, “the minister was being politically coerced because many people are demanding that all former SUPG members leave their posts and be replaced by new staff”.

In an interview held with “The Art Newspaper”, Schade said: “The following allegations were made against me: first, that I did not sufficiently represent the interests of the state museums; second, that I did not, in the past, sufficiently oppose the influence of the Ministry and the Party. Regarding this reproach, I said that they would first have to prove that I had done what they said I had done, and none of them was able to.

"The third reason was that a group of art experts, particularly some who belonged to the National Gallery and the Prints and Drawing Collection, was demanding my dismissal. There were intrigues going on there. I was asked to resign as quickly as possible so that someone else, Dr Willy Geismeier by name, could conduct negotiations with the Stiftung Preussischer Kulturbesitz."

On 2 July 1990, 13 directors of the Berlin State Museums wrote an open letter, addressed to the GDR Minister of Education, in which they protested strongly against the dismissal of Günter Schade and the appointment of a successor, saying that it “reminds us in a positively embarrassing way of the old undemocratic cadre practices dating from the time before the Wall came down." The directors who signed the letter also pointed out that most of them, “knowing of this systematic drive to remove Professor Schade from office”, had stated in writing on 21 June 1990 that they supported Professor Schade; when a vote of confidence was held, twenty of the twenty-three colleagues expressed their confidence in him: “We are convinced that Professor Schade cannot be accused of any more or any less than most of us”. As a consequence of this letter, Schade is at present continuing to direct the museums as before, but he says: “The official statement on what is to happen in the future is quite different; the minister is to dismiss all the Directors and Directors General within his sphere of competence. The object is to give a chance to people who, it is alleged, were previously prevented by political considerations from having any opportunity to take on posts as museum directors, but are now to be enabled to apply for such positions. It is said that this approach gives everyone the chance to be democratically legitimised. Applicants are to be nominated by a body of delegates: this type of procedure probably does not yet exist anywhere”.

Regarding the accusation that he had been a member of the SUPG party “like two and a half million others” and that he had certainly complied with the party’s ideas and wishes, Schade says that he “did not oppose the government. After all, every civil servant working in this high position was of course also obliged to implement his government’s arts policies. This applies in the West as in the East”. But he emphasises that “we did not pursue any party political nonsense on the Museum Island”. 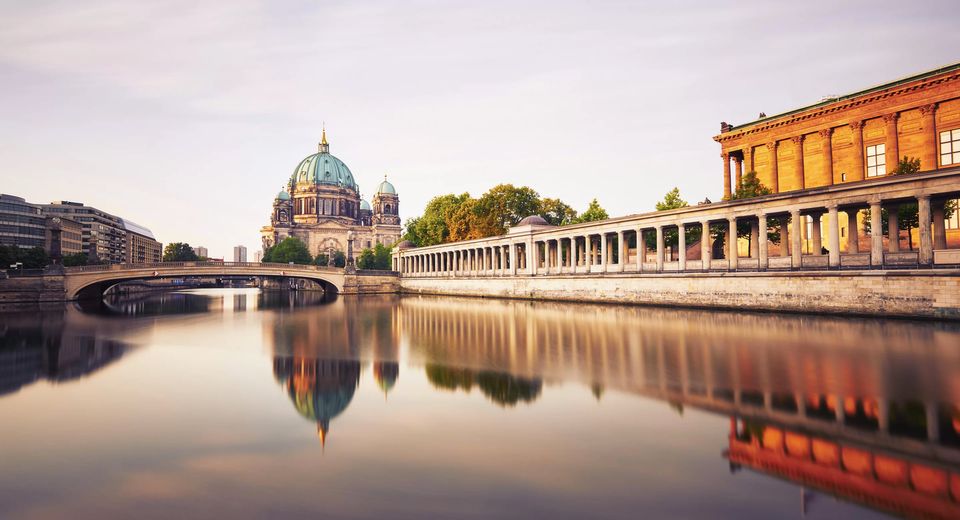 Asked what influence the Party had on museum politics,  Schade  replied that, although “the ministry possessed certain facilities”, there had been “wide margins of discretion and extensive freedom to take decisions”.

He said that no influence had been exercised on policy regarding exhibitions and personnel. “Of the six museum directors whom I appointed over the past seven years, two were party members and two were not. I appointed the party members because they were also good art experts. No one bothered me, and no one said that such and such a lady ‘comrade’ would have to be the new director. There were many people working at the Museum Island who were not bound by party politics. Some of them were religious, and others did not agree with government policies”. Questioned again about his cooperation with the Communist Party and the GDR government, Schade pointed out that “he held a representative function and had to do the best he could for the museums... The Crown Prince was formerly Curator of the Museums here, and Wilhelm von Bode, my predecessor in the position of director, had to have good relations with this man in order to obtain funds for the Museum Island. What do you think would have happened if I had started arguing with the party leadership? I would not have been given any money at all." A major problem experienced by museums in the GDR lay in how to expand their collections. “We had no access to foreign countries, only to the domestic market. And our budget was small. When I started work as Director General in 1983, our purchasing budget was 250,000 marks (Eastern) and in the last few years this was increased to a figure of from one to 1.5 million. But we could only use it to purchase what was available on the GDR art market. Only very rarely were we able to use Western currency to purchase from a Western country”.

One such exception was the purchase, for the Kupferstichkabinett, of drawings by Otto Nagel. According to Schade, it was possible to give this matter some political slant, with the result that the Ministry of Culture approved the required amount of Western currency.

One way for museums to acquire art works from Western foreign countries arose indirectly from the cooperation practised with the GDR’s state-operated art trade.

Over the past few months many rumours have been heard which have lent an air of mystery to the large warehouse in Mühlenbeck where these state-owned assets are housed. Schade was able to give precise details: “I know the Mühlenbeck warehouse very well. I worked there for three years as an expert appraiser operating by order of the GDR Commission for the Protection of Cultural Property.

“We carried out checks in the warehouses every six to eight weeks, and placed a ban on the export of art works which were of the highest quality and of national and international significance. They then had to be offered for sale to museums or private clients in the GDR.

“I acted as agent for many items that went to museums, including two paintings by Wilhelm Busch delivered to the National Gallery. I tracked down a Brandenburg glass collection for the Decorative Arts Museum in Köpenick. The only purchases possible in the state-operated art trade were those made in convertible currency.

“The Commission for the Protection of Art Works was able to place an embargo upon art works in Mühlenbeck and recommend that they then be sold to specific museums in the GDR. However, the museums had no Western currency with which to purchase from Mühlenbeck, but had to offer art works in exchange.

“Sometimes there were complicated barter deals with a ring of dealers. I would like to give one example. The National Gallery here possesses the important work ‘Samson Blinded’ by Lovis Corinth. It had been in private hands in London, and was purchased by Mühlenbeck in 1981. At the same time we sold paintings from Berlin National Gallery on the London art market. The proceeds were used to purchase ‘Samson Blinded’. This is the sort of thing that the Metropolitan Museum of New York does every day, is it not? The Decorative Arts Museum in Köpenick has also given faience, porcelain, silver works etc. in exchange for other items. This was done by barter alone.

When I was director of the museum in Köpenick, I sometimes used GDR money to buy up on the art market items which could not possibly be displayed at the museum. I had Mühlenbeck in mind from the outset. I did not even include these items in the inventory. Instead I immediately offered them to Mühlenbeck as the barter equivalent of some better items. I had to cut capers like this in order to get hold of good items.

“Looked at from the Western point of view, Mühlenbeck was a perfectly normal art trade. But from the point of view of our museums, there was a sellout there which did the country great damage. But we tried every way of taking part in this sellout.

Every museum man will later be measured by the works he has purchased. Afterwards, no one asks what difficulties he had to overcome in a particular case, such as that of Mühlenbeck. The decisive factor is that one work or another has been added to the collection”.