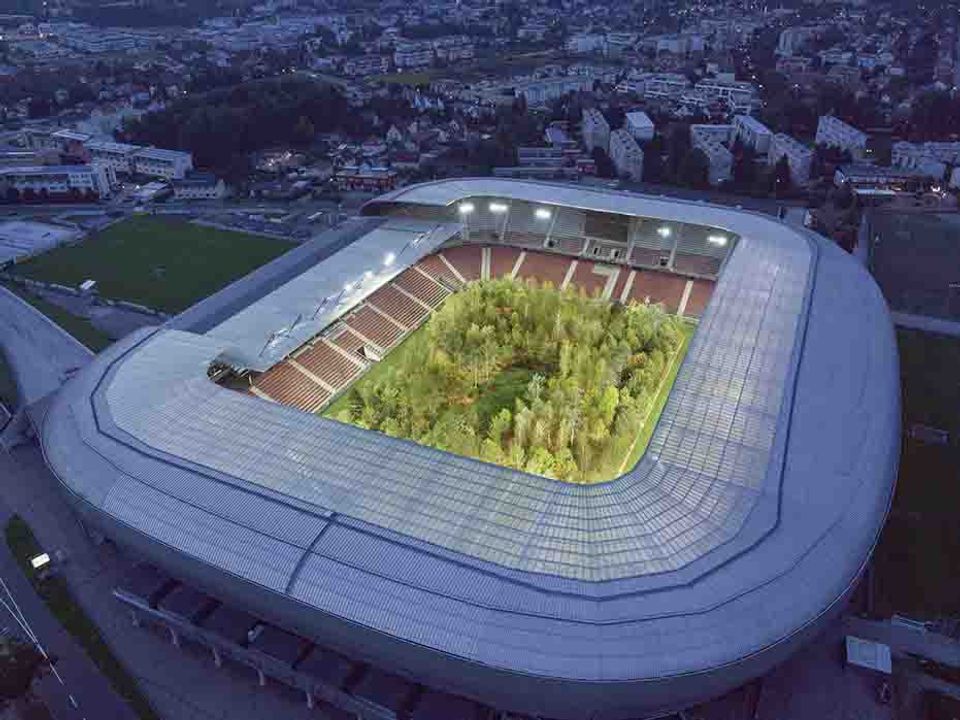 For Forest consists of a grove of 300 trees, each weighing up to six tons, temporarily transplanted into the Wörthersee football stadium in Klagenfurt, Austria © Littmann. Photo Unimo

An art project featuring a forest planted in a football stadium has become embroiled in an Austrian election campaign, with officials of the right-wing Freedom Party complaining that it is damaging the prospects of a local team that has been forced to play matches at the stadium of its arch-rival.

The Wörthersee stadium in the Austrian city of Klagenfurt is hosting a work by the Basel-based curator Klaus Littmann called For Forest: the Unending Attraction of Nature. It was inspired by a drawing by Max Peintner anticipating a world where nature is only on display in controlled environments as “a footnote to the progress of a civilisation based on machines”. Unveiled on 9 September, it is Austria’s biggest ever public art installation.

Caught in the campaign crossfire

Unfortunately, Littmann’s project launch coincided not only with unexpected success for the local football team, but also with the campaign for national elections on 29 September.

Built in 2008 for the European Football Championship, the 30,000-seat stadium is the property of the city of Klagenfurt, and used for sporting and musical events. The Wolfsberger football club has its own smaller stadium that has until now been adequate, but it qualified for the Europa League this year, and would normally expect to play its group-stage matches at Wörthersee.

While For Forest occupies the stadium, the team will have to play at the ground of its rival in Graz. The Freedom Party has exploited the situation to mobilise opposition to For Forest, to which it has been hostile from the start. The BZÖ, a Freedom Party splinter group, urged its members to protest outside the stadium with “non-functioning chainsaws”. Littmann has attracted political wrath at heated panel discussions and was attacked in the street before the opening. “That really crossed a line,” he says.

The right-wing parties claim the state is funding the project. Littmann insists that all the financing has come from private sources. “All of this has a lot to do with the fact that there is an election right in the middle of this project,” he says. “They are instrumentalising it.”

The trees are due to remain in the stadium until 27 October, after which they will be replanted nearby. In the meantime, Littmann is delighted with the reception that art lovers have given the installation—the actor Leonardo DiCaprio is among the thousands who have posted pictures on social media. “I always said this image would go around the world,” Littmann says, “but I didn’t anticipate the speed and extent with which it has happened.”