The database includes 9,000 catalogues from more than 390 auction houses in Germany, Austria and Switzerland 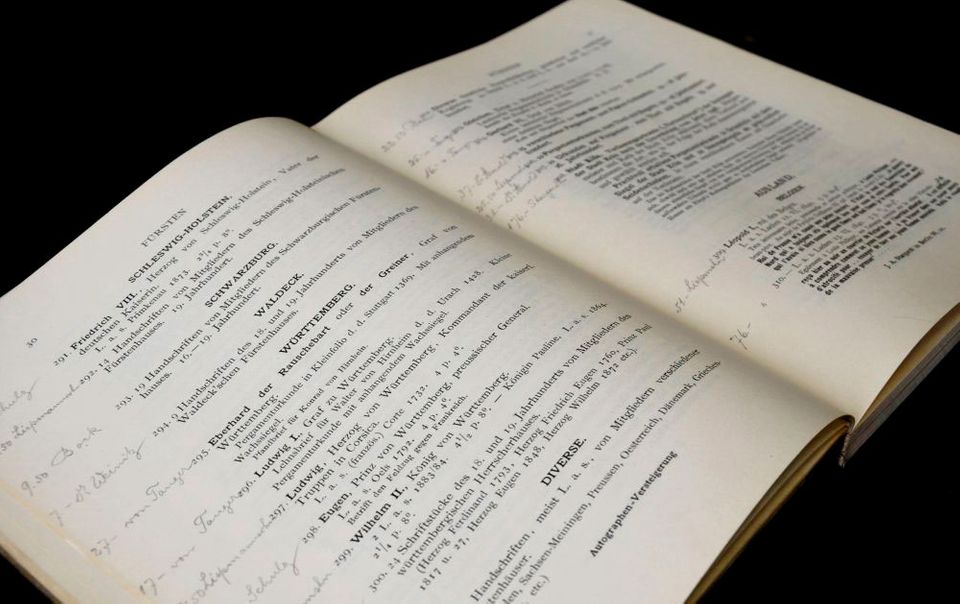 An auction catalogue for the sale of Alexander Meyer Cohn's autograph collection at J. A. Stargardt, Berlin, in October 1905 © SPK / Friederike Schmidt

Around 9,000 catalogues from more than 390 auction houses in Germany, Austria and Switzerland dating from 1901 to 1945 are now available online, a new resource that art-market historians and provenance researchers seeking to trace and identify Nazi-looted art say is invaluable to their work.

The project known as "German Sales", which began in 2010 and is now completed, is a cooperation between the Kunstbibliothek (art library) of Berlin’s state museums, Heidelberg University library and the Getty Research Institute in Los Angeles. Funding was provided by the Deutsche Forschungsgemeinschaft, the Volkswagen Foundation and the US National Endowment for the Humanities.

The art market in German-speaking countries was among the fastest-growing in the world at the beginning of the 20th century. The open access resource has been warmly received by scholars who would otherwise need to track down individual catalogues in scattered libraries and archives, often needing to travel there in person.

“Having thousands of auction catalogues on hand is priceless for a resource-intense and complex field such as provenance research, which entails looking at hundreds of catalogues for a single object at times,” says Lynn Rother, a provenance specialist at the Museum of Modern Art in New York.

No single institution had preserved the entire catalogue output for auction houses between 1901 and 1945, although the Kunstbibliothek had a collection of about 2,600 catalogues and Heidelberg University Library possessed a further 2,380. The remaining 4,000 or so were tracked down by Kunstbibliothek researchers in 58 different libraries and museums.

There are plans to further extend the database by adding missing catalogues from 1901 to 1945, catalogues from the 19th century and further information on gallery sales.