Foundation running the huge project has cut more than 80% of staff, but construction continues 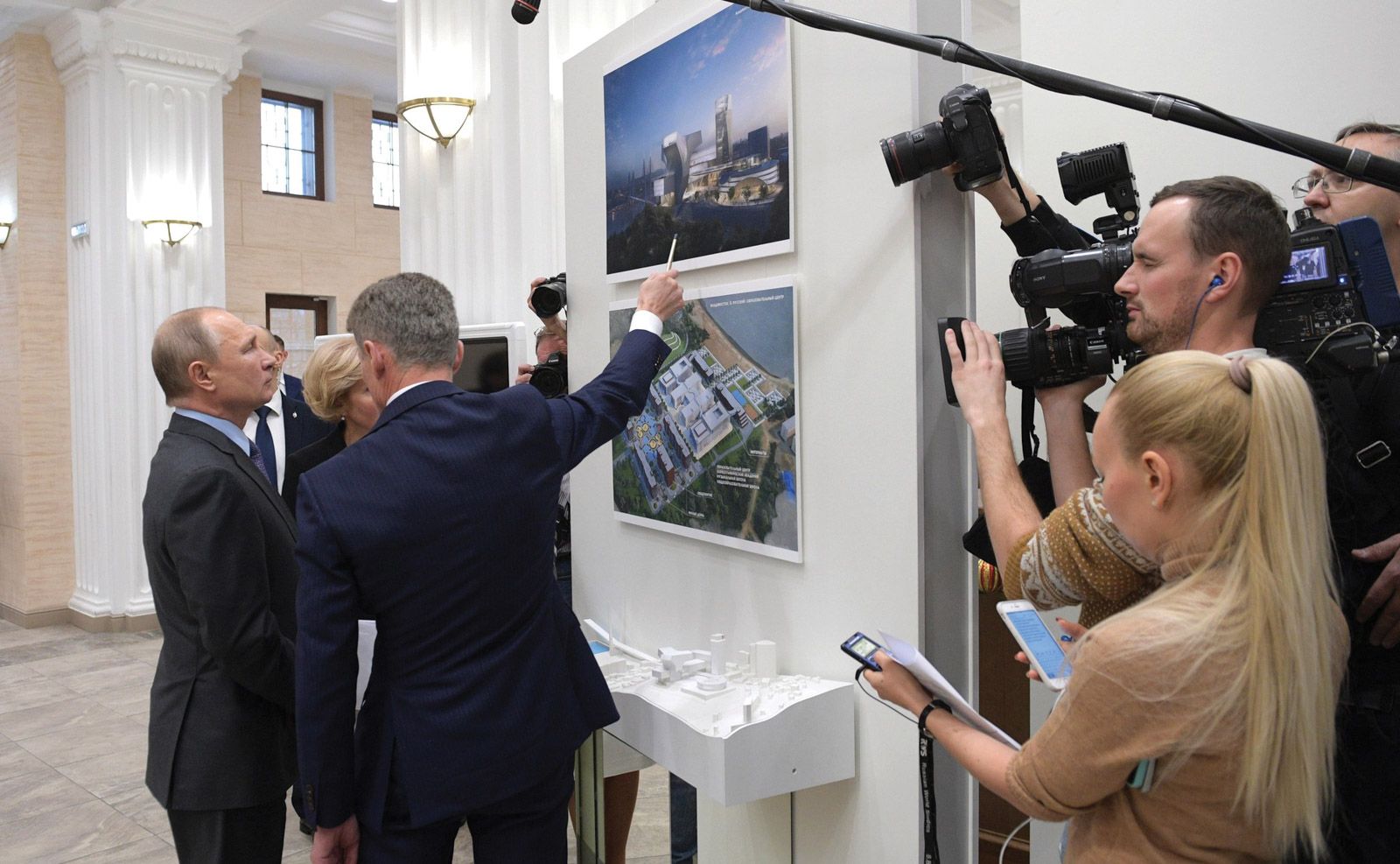 Russian president Vladimir Putin and local officials examine plans for one of the regional cultural centres in 2019 Kremlin.ru

Russian president Vladimir Putin’s 120bn ruble ($1.6bn) project to build a string of regional cultural centres with branches of leading federal museums and theatres has come under fire after staff of the foundation in charge of it were laid off and claimed they were not paid.

In a video posted on YouTube on 7 September, two dozen former staff members of the National Cultural Heritage Foundation, which is building the centres with funding from Russian state oil and gas profits, said that 120 contracts had been terminated in June with no notice, no severance pay and four months of salary arrears. The group appealed directly to the president to address the “mass dismissal of employees”.

President Putin has not visited any of the sites, in Kaliningrad, Sevastopol, Vladivostok and Kemerovo, since the Covid-19 pandemic began. His spokesman, Dmitry Peskov, has declined to comment directly on the layoffs, saying only on 8 September that “a certain optimisation took place” at the foundation. He suggested that the workers should sue because the “non-payment of salaries contradicts existing laws”.

An investigation by the news website Meduza found that ex-employees filed scores of lawsuits against the foundation for back pay in July and August. Moscow’s Presnensky District Court partially upheld a claim from a deputy department head, ruling that he must be paid nearly 1.4m rubles ($18,700) in salary, compensation and other payments, though not the full damages he sought. The court is processing several dozen further lawsuits.

According to Meduza, the pandemic deepened existing problems with the foundation’s finances, which were solely underwritten by the secretive state oil and gas company Rosneftegaz. A bureaucratic approvals process obstructed spending and delayed salary payments even before Rosneftegaz imposed drastic cost cuts at the foundation in April, amid falling oil and gas prices. More than 80% of the foundation’s staff are estimated to have lost their jobs as a result.

Natalia Volynskaya, the foundation’s president, tells The Art Newspaper that staff were cut due to “the reduction of tasks assigned to the foundation”, leaving 21 current employees. As a non-profit, the foundation depends on sponsorship and all expenditure is “controlled by the donor”, she says. She insists, however, that the layoffs complied with employment law and that “there were no delays in wages at the time of downsizing”. The foundation is co-operating with a law enforcement investigation in Kemerovo regarding the claims of non-payment, Volynskaya says.

Meanwhile, construction workers are taking legal action against the project’s contractor Stroytransgaz, a company owned by Gennady Timchenko, a businessman with close ties to Putin, which is also funded by Rosneftegaz. In March, workers at the Vladivostok site on Russia’s Pacific coast went on strike over the non-payment of salaries. Regional prosecutors have ordered the payment of 97m rubles ($1.3m) in salary arrears for the month of April but a dispute over unpaid bonuses continues, reports Russia’s official Tass news agency.

Officials connected with the project say that construction is advancing despite the turmoil. In August, the deputy prime minister, Marat Khusnullin, and the director of the State Tretyakov Gallery, Zelfira Tregulova, visited the site of the Kaliningrad culture centre, which will host outposts of the Tretyakov and the Bolshoi Theatre. Touring the Kemerovo site in Siberia last month, Khusnullin announced that the building will be completed in 2023, with the first section ready in 2021.

Volynskaya is confident that the foundation’s financial issues will be resolved “in the very near future”. Although the pandemic delayed the “optimistic” construction schedule in Kaliningrad, she says “now construction at all sites is in full swing”.