Having weathered protests, controversial Confederate statue is felled by hurricane

Officials voted recently to keep the monument on courthouse property in Lake Charles, Louisiana, but Hurricane Laura made an executive decision 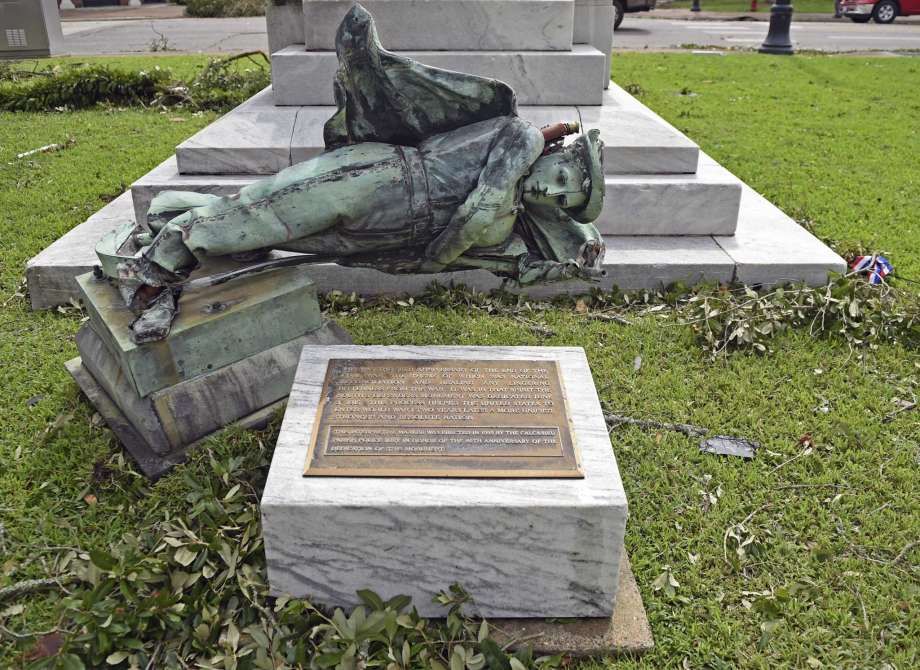 Lawmakers were bested by Mother Nature when a Confederate monument in Louisiana that local officials recently voted to keep amid calls for its removal was toppled from its base by Hurricane Laura as the storm battered the US Gulf Coast on Thursday.

Erected in 1915, the South's Defenders Monument was dedicated to Confederate soldiers from the area. But as actions across the country to remove monuments glorifying colonialism and the Confederacy have intensified following a surge in Black Lives Matter protests this summer, many area residents lobbied for the removal of the memorial, which is topped with a bronze soldier.

Calcasieu Parish officials had been taking public comments since late June about what to do with the statue, but ultimately the Parish Police Jury voted 10-4 on 13 August to let the statue remain, according to the Daily Advertiser. Yet, after the Category 4 hurricane made landfall on Thursday—making it one of the strongest storms to hit the region and killing six in the state—Twitter posts that morning showed images of the monument with the soldier in pieces on the ground.

“Lake Charles and Calcasieu Parish has been filled with controversy and tension after our parish government by a vote of 10-5 refused to take down the Confederate South’s Defenders Monument,” Davante Lewis, a Louisiana resident, tweeted along with a photo of the felled monument. “Hurricane Laura had other plans and brought it down herself".

Lake Charles and Calcasieu Parish has been filled with controversy and tension after our parish government by a vote of 10-5 refused to take down the Confederate South’s Defenders Monument.

Hurricane Laura had other plans and brought it down herself. pic.twitter.com/HmyCVlJF8k

The vote on whether to remove the statue split mostly along racial lines, with just one white member voting to remove it, although Lake Charles’s mayor, Nic Hunter—a Republican who is white—had expressed support for its removal. After the vote, protesters reportedly started an economic boycott of any business or church affiliated with the Parish Police Jury members who had voted in the monument’s favour.

Now the fate of the felled statue remains unclear, according to local officials.

This is not the first time nature has knocked the monument over. In 1918 it was toppled by a storm and promptly repaired. When it was once again felled in 1995, some local residents protested its replacement.